What the Empire State Building Did Last Night Caused a Fury Among New...

What Average Investors Should Do In Market Panics and Melt Downs

Jeff Carter  |  Jun 03, 2012
The opinions expressed by columnists are their own and do not necessarily represent the views of Townhall.com.
Top Columns
Trending on Townhall Media

You open the newspaper or turn on the business news and you read headlines that are not optimistic. When you look at the economic indicators on a macro level, they aren’t positive. World wide, you see Europe imploding, India slowing, and China slowing. This isn’t a bullish scenerio.


US Unemployment Rate data by YCharts

Ask yourself a few questions? First, what’s your time horizon? How soon do you need the money? If you are in your early fifties or younger, the odds of you retiring in the next ten years are slim. If you are in your later fifties, you may see retirement coming. Older people should have less money in the market, but now isn’t the time to pull it out. 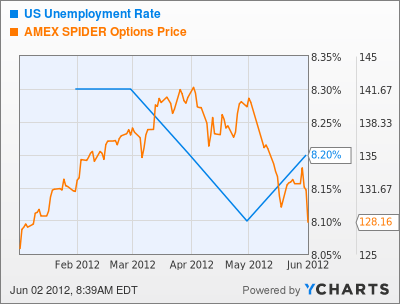 The second question you have to ask yourself is this, “Am I smarter than the market?”. Everyone thinks they are pretty smart. However, do you know more about a particular stock than the market does? The stock market has millions of players each acting in their own interest on their own information. How are you smarter than all of them combined? The answer is you aren’t.

A long time ago, back in 1965, Eugene Fama proposed a theory. Over the course of time, many academics have tried to puncture his theory. Market analysts and Wall Street types had an economic incentive to disprove the theory. If you follow Fama, you win. You beat everyone else in the market, but you don’t beat the market itself.

Don’t pick individual stocks. Making money in them is like doing heroin. It feels good for awhile, but then the habit gets ever more expensive. Eventually, you lose.

Instead, take your money and put it in a no load mutual fund that replicates the broad indexes, like the S&P 500, the Russell 2000 or something like that. Over the long haul, you won’t lose. You also won’t pay many fees. Investing is practically free.

Once you put your money into a fund like that, ignore the news. Don’t look at the day to day gyrations of the market. Just consistently put money away. When the market dives like it has the past few days, you are buying cheaper. When it rallies like it did earlier this year, you are buying at a higher price. But the sum of your actions will be an even price over time and your money will grow at around an 8% clip. When you are old and gray, you will have a nice nest egg to spend on yourself at retirement.

The problem with this approach is human emotion. All around you there are ads begging for your cash. They try to create uncertainty in your system. Friends at parties may talk about their last big score. This weekend you might hear, “I bought puts on the market and doubled my money.” Ignore them. Doing things like that is for the pros. Believe me, we don’t make money every day, or even every year. If it was that easy, there would be more of us doing it.

Every year in his investor letter, Warren Buffett gives the same advice I just gave above. He knows markets. Even he doesn’t beat it every year. The reason he does so well is that he buys at a price the market never sees. He also has so much cash, he can afford to buy and sit….for years and years. As a matter of fact, he has no intention of ever selling.

If you are in single stocks, sell them. Take the money and buy the entire market. In twenty years, you will be glad you did.