President Obama, You Can’t Set A Gas Price-Markets Can

Yesterday Obama went after the speculators. I swear when he first came to Chicago he must have been ignored and put out by a bunch of traders. Imagine him going to a bar near the CBOT on a sunny Friday afternoon around 4PM. That would have been enough time for a mass of traders to exit the pits and “get their drink on”.

Picture Obama trying to belly up to the bar and be one of the guys. After spending the day with Bill Ayers at the Annenberg Foundation, he’d engage in meaningful debate and teach these hard core capitalists a lesson. However, traders have a really good BS meter. They probably called “BS” and told him to take a hike.

His latest proposal on putting more cops on the street to monitor futures speculation is BS too. If you have a good internal meter like I do, then you ought to be catching the sniff of a mighty ripe wind right about now.

First, speculators cannot control the price of crude oil($CL_F). It’s impossible. Second, speculators don’t get on the phone and collude to drive oil prices higher or lower. Can you imagine? “Hey Farid, today me and Bill here are going to buy thousands of oil futures.” It just doesn’t happen. If speculators were trying to drive energy prices higher, why are they giving natural gas away for next to nothing?

Are there tankers full of oil sitting out on the ocean that were put there by speculators? No. Not the speculators I am talking about. Those tankers are owned by oil companies and other big players in the market that are already heavily regulated. They are waiting to get to refineries. America doesn’t have enough refineries to process the oil that’s produced. That creates whip in the supply chain and increases prices.

The next logical step in the Obama process would be to propose a centralized government agency that imputes a price for crude oil based on some biased average. That didn’t work with Nixon, and it’s not working well with Chinese currency.

What’s going to change the skew? A reason to own oil today. Or, more expected supply or more refining capacity. The only way to do that is issue permits for drilling on more proven reserves of oil. The futures market will respond quickly and go from backwardization to contango. Long term prices will go below near term prices on the expectation there will be more oil and more capacity to refine that oil. This has nothing to do with more cops on the street and everything to do with more oil workers in the fields. But backwardization and contango aren’t the reason for energy prices. They are a symptom used to describe market conditions.

Last night, on the Bill O’ Reilly show, former NYMEX board member Eric Bolling made a statement that was incorrect. He said that intraday, speculators could drive the price of trading without the knowledge of anyone. That’s almost impossible if clearing firms have the right risk controls on their traders. With computerization, clearing firms set hard limits on what sort of volume traders can trade based on how much money is on deposit in a trading account. Not enough money-you can’t put the trade on. There is no more “Brazilian Trade”. Traders used to joke about putting on a bunch of futures and buying a plane ticket to Brazil. If the trade doesn’t work, get on the plane and fight extradition. It just doesn’t happen.

Traders cannot control the price of a commodity. The market is just too big with too many players pushing too many agendas. That’s what makes a market. In small bursts of activity, prices move and traders can influence it. But overall, when settlement comes, they can’t. What you are seeing in oil prices is the market pricing in all the information it has over supply, demand, regulation, expected future supply and expected future demand. There aren’t a bunch of sheiks and commodity traders in a dungeon controlling the price. That only happens in James Bond movies.

With all the consternation over oil trading going back to 2007, don’t you think intraday large positions get enough scrutiny already? And if the traders have the cash to back up their trades, who cares? More speculation and liquidity is a sign of a healthy market and delivers better price information.

The other fact everyone is getting messed up on is that there are two oil markets. One for Light Sweet Crude traded at the NYMEX and the other for Brent Crude traded at the ICE($ICE). The spread between these markets is larger than it normally would be. That’s due to a lot of factors. In general, all those factors add up to less supply of brent crude. 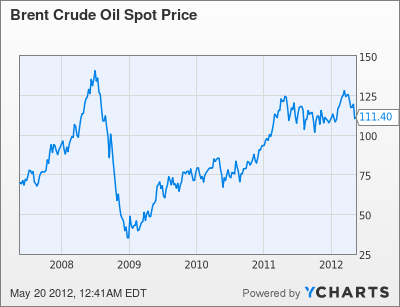 This is all about a re-election strategy shopping for villains. George Bush might be distasteful to hard core Democrats, but to independents, he is no longer in the picture. Congress can’t be a villain for oil prices since they don’t set the rules and regulations around them. That’s on Obama.

As to the oft cited stat, “that we use more than 20 percent of the world’s oil and we only have 2 percent of the world’s oil reserves.”, so what? It’s not relevant. All that means is we are the most productive in the world. Using more energy is good. Economic effects, like futures prices, will help companies decide how much to use. By the way, back in 1995 when we argued about drilling in ANWR, they said it would be ten years before it would make a difference. Not drilling in ANWR has made a difference, we have higher oil prices.

The price of oil is influenced more by poor government regulation and a tenacious global warming agenda than a bunch of guys in funny jackets pressing keys on a keyboard.