Jean Card
|
Posted: May 15, 2019 11:38 AM
Share   Tweet
The opinions expressed by columnists are their own and do not necessarily represent the views of Townhall.com. 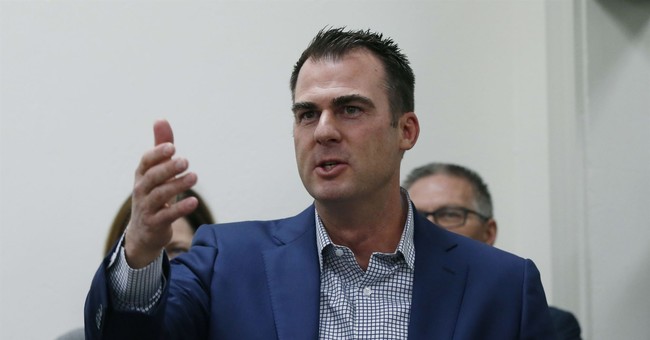 According to an African proverb, “when elephants fight, it is the grass that loses.” This metaphor seems to always apply to battles over health-care policy, and it is quite vividly true in the current skirmish over legislation impacting the cost of prescription drugs in Oklahoma.

Everything about health care is…big. At around 18 percent of U.S. GDP, health care is big money. In raw numbers, we spend, as a nation, around $3.5 trillion each year. That’s more than $10,000 per person, and it grows significantly every year. The two biggest players in this titanic market are the ones we all know: Insurers and pharmaceutical manufacturers.

And those players are at odds right now in Oklahoma.

There is a bill moving through the legislature in Oklahoma City containing a provision that could make a big impact on the price of medicine in the Sooner State. It’s referred to as the “any willing provider” mandate, and its supporters in the pharmaceutical manufacturing world will tell you it’s a populist provision designed to bring small, independent pharmacies onto an even playing field with CVS and Walmart.

That’s a lovely idea. The competitiveness and ultimate viability of independent pharmacies is a worthy goal. But in this case, family-owned pharmacies are the convenient façade for an initiative that is truly about big business and big money.

Big insurers and employers don’t like to pay too much money to big PhARMA – every dollar to PhARMA is a dollar lost or a dollar only regained by raising premiums or reducing benefits– so they created “pharmacy benefit managers” that negotiate for lower prices on prescription medicine.

Big PhARMA is tired of this negotiation business, so they are leveraging their power in state capitals – including Oklahoma – to regulate the pharmacy benefit managers in a way that will force insurance companies to pay higher prices for drugs.

The health-care system may be complicated, but there is one simple truth that all consumers understand: We are the ones who end up paying when prices go up. Through our premiums, our co-pays, and our taxes.

Oklahoma Governor Kevin Stitt understands that simple truth, and he recently vetoed another version of this legislation. But big PhARMA isn’t easily dissuaded. They buried their lucrative provision in another bill, draped it in the cloak of small business, and turned up their well-funded heat on legislators.

The tactics are clever. Legislators and the governor risk appearing to be anti-competition, and anti-independent-business if they vote “no.” Never mind that conservatives and business groups call the legislation a “job killer,” “crony capitalism at its worst,” and “overbearing government interference.” Or that the Legislature’s own staff suggested it is the “opposite of free market.”

There are clearly differing views here – and that calls for a thoughtful solution.. Compromise must be employed – and this was the governor’s message when he vetoed an earlier effort.

But cooperation and negotiation have yet to emerge here. It’s time for the grass to have its day. Consumers in Oklahoma and other states must make their voices heard by contacting their legislators directly and demanding fair policies that don’t increase the cost of medicine. Remind them: It’s about the people, not the fighting elephants.

Jean Card is a writer and communications consultant with expertise in public policy and small business issues. She is a former speechwriter for the U.S. secretaries of Labor and Treasury as well as the attorney general.