Why Americans Should Be Wary of Large Stimulus Checks

Jason Garshfield
|
Posted: Feb 06, 2021 12:01 AM
Share   Tweet
The opinions expressed by columnists are their own and do not necessarily represent the views of Townhall.com. 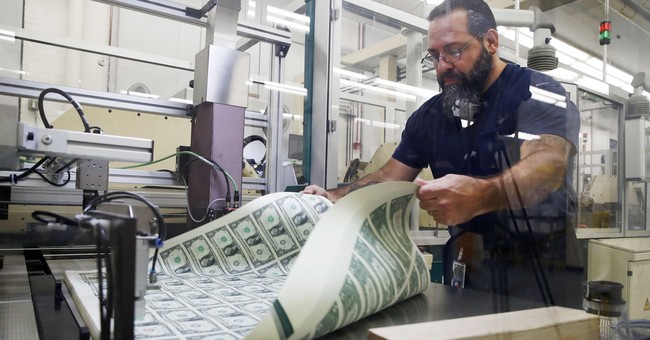 According to at least one recent survey, 65 percent of voters, including bipartisan majorities, would support $2,000 checks monthly for the duration of the pandemic. Politically speaking, any politician who argues for a decreased stimulus check is putting themselves in a losing position.

And yet voters should be wary of these checks. Nothing ostensibly free ever comes without a great hidden cost, and stimulus checks may be the definitive example of that.

After all that our politicians have put us through, economically and psychologically, over the course of this past year, $2,000 is the least they owe us. Except they will not be paying. The money will not be coming out of Nancy Pelosi’s pockets, or Mitch McConnell’s, except insofar as they are taxpayers. Our politicians will still be dining at The French Laundry when this is done.

Instead, we – or more specifically, our future selves – will be paying for the stimulus checks.

Let us remember a few inconvenient numbers: our government already spent over $2 trillion on the initial stimulus package in March, then spent nearly $1 trillion more in December. The latest stimulus bill will cost another $2 trillion. For comparison, the entire Iraq War cost $2 trillion over the course of a decade and a half.

Our national debt currently stands at nearly $28 trillion. This is a debt that will have to be paid off, far into the future, and young Americans are the ones who will disproportionately bear that burden. In a very real sense, the youth are being taxed to keep the elderly alive.

Taxing the rich will only go so far. If we taxed 100 percent of Jeff Bezos’ $180-odd billion in wealth, it would not pay for a single month of the proposed $2,000 stimulus. Completely looting the bank accounts of every single billionaire in America (worth a combined $4 trillion) would barely pay off what we’ve spent this year.

A stimulus check does not reflect any new wealth being created. It will have to be printed, and sure enough, money stock has risen sharply in the past year. Inflation is, essentially, a tax on savings, and a $2,000 check is useless if the goods you buy cost that much more.

There is also the question of how much stimulus checks will help those who are truly struggling. We have heard that $600 checks are inadequate to pay for a single month’s rent in most parts of the country, let alone other necessary household expenses. How much difference will a $2,000 check make? This crisis has been going on for a year, and those suffering most are far more than $2,000 in the hole.

Politicians who claim compassion for their struggling constituents have a readily available option: they can open the economy. It is wealth which forms the background of economic prosperity, not money per se, and wealth can only be created in any sustainable sense by the exchange of goods and services in a free economy. This is the true stimulus, and it should be the goal of politicians, not showboating about the size of a government handout.

Stimulus checks do not stop the economic devastation caused by the current shutdown; they merely permit politicians to hide it. With stimulus, the pain will be diffused over the coming decades, and it will be harder to trace its effects back to the source. When you go into a store ten years from now, you will not spend any time thinking about how much less your groceries would have cost if not for the $5 trillion in stimulus passed a decade earlier.

Right now, the devastation from economic shutdowns is being felt acutely, and it is easy to trace to its source. Stimulus checks are a fig leaf that politicians do not deserve. If a $2,000 check is a bribe to keep quiet and accept the current shuttered economy, then let us not say we sold ourselves quite so cheaply.

Americans deserve not free stuff, but freedom. Give us that, and the economy will sort itself out, as it did before March of last year. We should not live in a world where we are all unemployed and shut up inside our houses, subsiding on grants of free government money. Even if this were somehow economically feasible, it would still be a state degrading to the human condition and antithetical to our spiritual well-being.

No matter how much of a dopamine rush it may be to get a sudden infusion of $2,000, do not take too much joy in it. We will be paying the price for years to come. As a temporary stopgap measure in a time of acute crisis, stimulus may be a regrettable necessity. As a means of long-term economic sustenance, it is untenable.