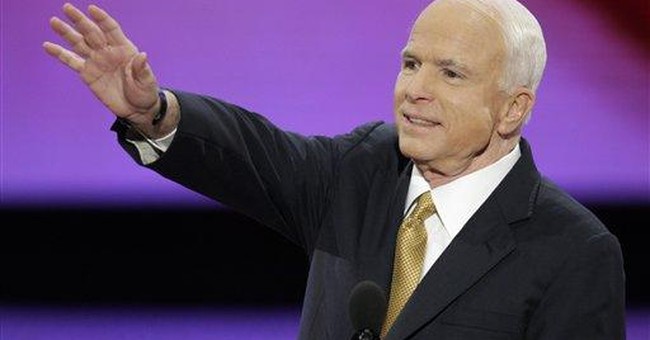 Apparently realizing that he couldn’t live up to the rhetorical challenge laid down by either his running mate or his opponent, John McCain played to his strengths and turned his acceptance speech into a format as close to a town hall meeting as possible in a vast arena. John McCain has is awkward in giving a speech and uncomfortable with set pieces; he likes to talk one-on-one. In his convention speech, he faced a crowd worn out by the hassles of security checks and a non-stop round of networking, partying and high-intensity electioneering. In addition, there was the emotional let-down of the day after a rip-roaring night where Sarah Palin, the GOP vice presidential candidate, brought down the house. He faced an uphill battle to change the scene and re-energize the convention.

Plus, John McCain’s strong suit is his experience and experience doesn’t count anymore. Especially for Republicans, experience is suspect. In a climate of change and reform, in a climate of rhetorical flourishes and theatrical settings, in a climate of youthful vigor, optimism and idealism, what could a battered and scarred warrior who left his vigor on the battlefield and substituted his idealism for a bone-deep vision and mission do?

He could be himself; he could present the real John McCain with authenticity, sincerity and a powerful personal narrative. He could showcase the driving force that propels him forward and tell America about the point when his life’s “calling” became “Country First.” He could wrest away empty-suit “change” and provide programmatic substance to the theme. He could show his fighting spirit and make the case that reform means battle scars, not a glib tongue. He could prove that he is not out of touch, but very real and engaged with the issues. He could honestly admit that his party has lost the trust of the people because of corruption and earmarks. He could vow that, as a maverick, he is the one to take on the special interest groups because he knows the playing field, the players and which game plans work.

He did all that and he reveled in the success of his choice for sparing partner –– emphasizing the way he and Alaskan governor Sarah Palin reinforce each other’s natural gifts and the power of the record they share as mavericks not afraid to face down the political bullies.

He spoke to the television audience –– only incidentally including the convention crowd. He came across as real and authentic, the two qualities that are essential for effective political leadership. He recognized that, first and foremost, voters cast their ballots for the candidate that they trust. He set out to win the people’s trust by being more open and emotional than ever before about his motivation and reason for staying in the political arena. He determined to win the people’s trust by admitting his party’s past failures laying out a platform to reverse course. He determined to lay down his fighting spirit, battle scars, patriotism, foreign policy expertise and years-long record up against an opponent that he carefully and skillfully implied was untried and full of youthful arrogance and thus incapable of leading in a dangerous world where terrorism is still threatening and domestic challenges are threatening the American way of life.

As Karl Rove pointed out, the speech had 67 paragraphs and fully 19 of those (the majority of his speech) dealt with the “kitchen table issues” that concern Americans and to proving that the GOP consists of average Americans who live in those day-to-day realities and worry about those troubling things that disturb everyone’s peace of mind. He clearly established that he knew the toll it was taking on Americans to see grocery store prices going up every week and the price of gas continuing at break-the-budget levels.

McCain clearly understood the demographics that have to come aboard if he is to prevail in the November elections. He directed the speech to those undecided voters and scored points by declaring that our schools are the civil rights issue of our time.

The shop-worn narrative of his Vietnam prison experience was transformed into a moving, deeply emotional personal account of how “living in a box” changed his thinking and became the motivating force for the rest of his life. He said, “Long ago, something unusual happened to me that taught me the most valuable lesson of my life. I was blessed by that misfortune. I mean that sincerely. I was blessed because I served in the company of heroes, and I witnessed a thousand acts of courage, compassion and love.”

The former prisoner of war described –– without mincing the words –– his youthful arrogance, pride, independence and self-centeredness prior to the prison camp (subtly, of course, implying that his opponent is still at that point in his life). McCain came away from that horrific, demoralizing ordeal –– with its torture, humiliation, solitary confinement and unbearable pain, with one goal –– to give back to his country because his fellow soldiers saved his life and because his country did not fail him in that time of extreme distress. He admitted to being broken by the enemy and feeling that he had betrayed himself and his country. He choked up as he humbly described the ways his fellow prisoners, rescued his spirit and self-respect. He credited “the good man in the cell next door, Bob Craner” for saving his life. Those friendships, he said, are the deepest ones of his life. He said to the hundreds of former soldiers in the arena and to the millions watching on television that “no man can always stand alone.” Bob Craner told him to “get back up and fight again for our country” and for the brave men who “served with him and fought for him everyday.”

McCain declared that he was never the same after that: “I wasn’t my own man anymore. I was my country’s.”

In another, more direct, jab at his opponent McCain ended by describing why he was running for president. “I’m not running for president because I think I’m blessed with such personal greatness that history has anointed me to save our country in its hour of need. My country saved me. My country saved me, and I cannot forget it. And I will fight for her as long as I draw breath, so help me God.”

He ended his remarks with a rousing challenge for Americans to join him in the fight. “We are Americans,” he said, “and we never give up. We never quit. We never hide from history. We make history.”

McCain laid down the battle line and signaled, with clarity and force, the choice before the American public. He called for the American people to put their trust in him –– an “imperfect servant of my country . . . who has never lived a day, in good times and bad, that I didn’t thank God for the privilege.”