Jane Robbins
|
Posted: Jul 26, 2016 12:01 AM
Share   Tweet
The opinions expressed by columnists are their own and do not necessarily represent the views of Townhall.com. 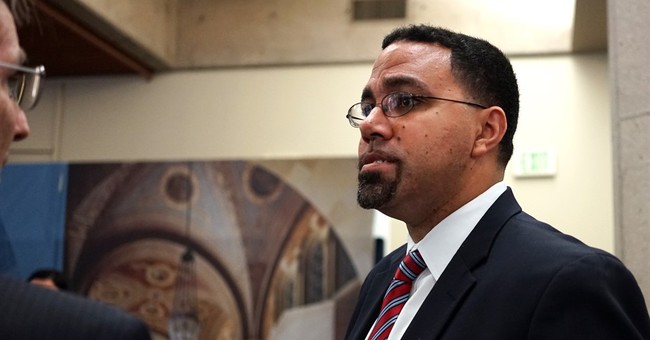 Editor's note:This column was co-authored by JaKell Sullivan, a member of Return to Parental Rights — a grass-roots parents group representing parents across America who are interested in preserving the family as the fundamental unit of society and parents' fundamental rights to direct their children's educations.

In May 2014, conservative columnist George Will warned that Common Core represented the "thin edge of an enormous wedge" and that "sooner or later you inevitably have a national curriculum."

Will’s concern is now closer to realization. One lever the U.S. Department of Education (USED) may use to hasten this outcome is the #GoOpen Initiative, through which USED will push onto the states Common Core-aligned online instructional materials. These materials are “openly licensed educational resources” (Open Educational Resources, or OER) – online resources that have no copyright and are free to all users. Utah is

#GoOpen is part of a larger global and federal effort to institute OER in place of books and traditional education (in fact, USED appointed a new advisor to help school districts transition to OER). More disturbingly, another part of this scheme increases the federal government’s ability to monitor and track teacher and student use of these online resources – and perhaps even influence the content.

This outcome could result from a related, joint USED-Department of Defense initiative called the Learning Registry. The Registry is an “open-source infrastructure” that can be installed on any digital education portal (such as PBS) and that will facilitate the aggregation and sharing of all the linked resources on the Registry. The idea is to “tag” digital content by subject area and share on one site supposedly anonymous data collected from teacher users (content such as grade-level, recommended pedagogy, and user ratings). That way, Registry enthusiasts claim, teachers can find instructional content to fit their particular needs and see how it “rates.”

Putting aside the question whether USED should push states into a radical new type of instruction that presents multiple risks to students and their education (see here, here, and here), the Learning Registry threatens government control over curriculum. Here’s how.

USED has proposed a regulation requiring “all copyrightable intellectual property created with [USED] discretionary competitive grant funds to have an open license.” So, all online instructional materials created with federal dollars will have to be made available to the Registry, without copyright restrictions.

[Federal law prohibits USED from funding curricular materials in the first place, but this Administration’s violation of federal law has become routine.]

The Registry will compile all user data and make

And speaking of “user data” that will fuel all this, the Registry promises user anonymity. But consider the example of Netflix movie ratings, in which two researchers were able to de-anonymize some of the raters based on extraordinarily sparse data points about them.

Despite Netflix’s intention to maintain user anonymity, its security scheme failed. How much worse would it be if the custodian of the system – in our case, USED – paid lip service to anonymity but in fact would like to know who these users are? Is Teacher A using the online materials that preach climate change, or does he prefer a platform that discusses both sides? Does Teacher B assign materials that explore LGBT issues, or does she avoid those in favor of more classical topics? Inquiring bureaucrats want to know.

In fact, in a 2011 presentation, USED’s bureaucrat in charge of the Registry, Steve Midgley, veered awfully close to admitting that user data may be less anonymous than advertised. Midgley said, “[Through the Registry] we can actually find out this teacher assigned this material; this teacher emailed this to someone else; this teacher dragged it onto a smart board for 18 minutes. . . .” The Registry will also use “the math that I don’t understand which [will] let me know something about who you are and then let me do some mathematical operations against a very large data set and see if I can pair you with the appropriate relevant resource.”

Sure, all this will supposedly be done anonymously. But teachers should hesitate to embrace something that could possibly reveal more about them than they bargained for.

USED would protest that this is all hypothetical, and that it would never abuse its power to influence teachers and control instructional content. But with this most ideological of all administrations, denials of ill intent ring hollow (remember Lois Lerner?). If the power is there, at some point it will be used. Never let an “enormous wedge” go to waste.