James Wanliss
|
Posted: May 06, 2016 12:01 AM
Share   Tweet
The opinions expressed by columnists are their own and do not necessarily represent the views of Townhall.com. 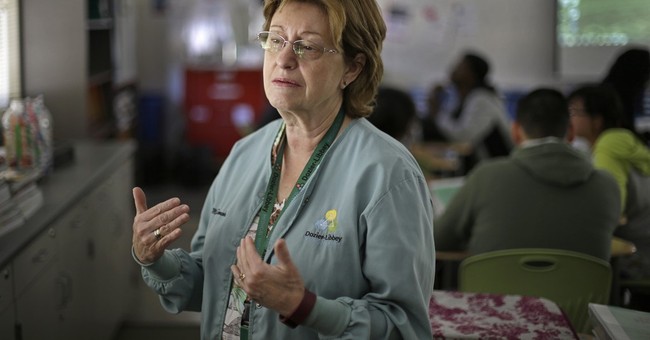 Federal attempts at Green indoctrination of children continue at a furious pace. The primary means are the Common Core State Standard Initiative and the Next Generation Science Standards (NGSS), aimed at schools from K-12.

Common Core is intended to create uniform, one-size-fits-all, national education standards. It is a pet project of billionaire Bill Gates, whose foundation not only bankrolled the project but spent over $200 million to encourage widespread political support. It enjoys the support of the National Governors Association (NGA) and the Council of Chief State School Officers (CCSSO).
Despite claims that this originated entirely at state level, the U.S. Department of Education was heavily involved behind the scenes and provided incentives for states to adopt the standards via waivers from the No Child Left Behind Act upon adoption of Common Core and cold, hard cash through President Obama’s Race to the Top initiative.
To date 38 states have fully adopted the standards. This is down from a high of 45 as several states repealed Common Core when it became obvious how strings attached compromised local educational autonomy.
CARTOONS | Gary Varvel
View Cartoon
In December 2015 President Obama signed the Every Student Succeeds Act (ESSA), the offspring of No Child Left Behind, which promises to be a source of funding for states that comply and enforce comprehensive so-called environmental literacy plans in K–12 schools.
The federal carrot and stick have enticed not a few states to kowtow. Maryland was ahead of the curve when, in 2011, it was the first state under Common Core to require something called ‘environmental literacy’ in order to graduate from high school.
The Next Generation Science Standards (NGSS) approved by the Kentucky Board of Education (BOE), and likely to be adopted in many other states, revolutionizes the classroom landscape for millions of students. Like Common Core it recommends that educators identify global warming as a core concept and stress the relationship between global warming and human activity.
That is ironic because the consensus is that there has been no global warming for almost two decades (aside from the current short-term rise driven by a super-El Niño this year). Nevertheless, many textbook publishers are incorporating NGSS standards that insist unabated global warming is accelerating and is unquestionably caused by human CO2 emissions.
The West Virginia BOE recently took a lot of heat for suggesting changes to the NGSS they had unwisely adopted early in 2015. NGSS assumes human-caused global warming as a persistent feature of Earth’s climate, but the BOE voted in December for a more nuanced approach. Rather than assuming anthropogenic global warming, as NGSS insist upon, they want to encourage debate.
In March 2016 State Representatives Lynn Bechler and David Hale introduced a bill in the House to withdraw Kentucky from both NGSS and the Common Core Standards. Their concern is that Common Core and NGSS effectively remove state and local control of educational standards and surrender them to a private third party, deeply vested in federal visions of what good citizens should learn and think.
How times change. In 2013 the Huffington Post, a left wing internet site, crowed that the Kentucky Board of Education was on the side of the angels because they had swatted ‘deniers’ and backed the required teaching of evolution and climate change.
When I looked at the standards I found they lack any teaching of the physics of heat, or the relationship between radiant heat and energy. There is no appreciation of the role the sun plays in affecting climate (part of my specialty as a space physicist), or of the relative impact of human contributions. In practice, therefore, the national standards are simply propaganda fitting the party line of the global climate change alarmists. They are “Green” indoctrination of children.
The federal push to have everyone think the same approved thoughts, like a herd of cows, should be troubling to not only parents but also educators and others. What’s so wrong with a little diversity?