James H. Burnley IV
|
Posted: Feb 21, 2017 12:05 PM
Share   Tweet
The opinions expressed by columnists are their own and do not necessarily represent the views of Townhall.com. 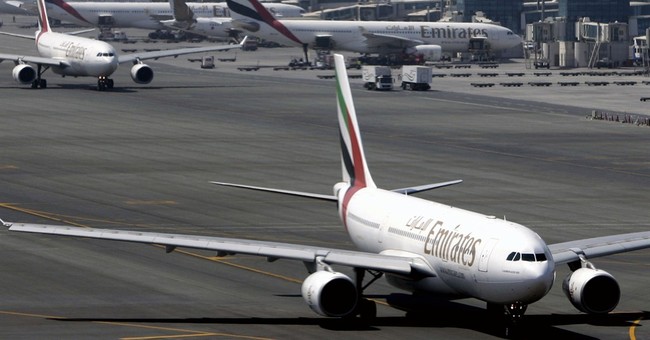 President Reagan, who I served as Secretary of Transportation, entered office backed by millions of citizens who wanted government to put hard-working Americans first and make jobs a priority. Today, President Donald Trump finds himself in nearly the same position: with a mandate from the people to put American jobs first.

At the Transportation Department, I saw firsthand how the aviation industry – which today supports over 11 million jobs across the country – is vital for fulfilling these promises. That’s why it’s so troubling that two countries are violating aviation treaties with the United States and putting hundreds of thousands of aviation jobs at risk.

The United Arab Emirates and Qatar have spent the last decade funneling billions of dollars of subsidies into their state-owned airlines – Emirates, Etihad Airways and Qatar Airways. These subsidies are forbidden under the terms of the Open Skies agreements that give these airlines the right to freely launch new flights to the US. Thanks to the subsidies, the Gulf carriers can expand without any regard for the economic realities that guide decisions for privately-owned U.S. airlines. Fueled by the oil-rich treasuries of their government owners, the Gulf carriers have concocted an expansion scheme designed to push their competitors off routes and dominate global aviation. American businesses, which have to strategize their growth to make a profit, are left competing on a tilted playing field.

The Gulf airlines’ cheating threatens to undermine the foundation of the U.S. airline industry and its hundreds of thousands of employees. In a report from economists at Compass Lexecon, the data showed that, contrary to the Gulf carriers’ claims of stimulating demand, their expansion into these markets “failed to meaningfully stimulate additional traffic.” Therefore, their “gains have come at the expense of U.S. and other carriers.”

To put it simply: Gulf carriers draw passengers away from other airlines when they enter a new market, offering prices and deals that – thanks to their subsidies – don’t need to make any economic sense. When this forces an American airline to cancel its route, jobs are lost that won’t come back. Our country has unfortunately learned the hard way that the threat massively subsidized, foreign competitors pose to even the most vibrant of American industries is all too real.

One simply needs to look at the collapse of the U.S. shipbuilding industry, which was once a powerful economic engine for our coastal states. A report written by former deputy assistant secretary for the Treasury Department Aaron Klein paints a troubling parallel between the decline of America’s shipbuilding industry – where it was once the world leader – and the threat now posed by the Gulf airline subsidies. Facing heavily subsidized foreign competitors in the 1970s and 1980s, it was all-but-impossible for American shipbuilders to put up an effective fight. The playing field was so skewed that American businesses suffered a sharp decline, yet the government took no corrective action. The impact on American jobs was disastrous, with thousands of workers in states like Maine and Louisiana losing their livelihoods.

Ignoring the lessons learned from the U.S. shipbuilding industry would be outright foolish. If the U.S. government stands aside as foreign subsidies wreak havoc on American industries, we should not be surprised if history repeats itself. As Klein rightly suggests, let’s take this as a cautionary tale. The U.S. airline industry has been able to compete, and stay strong, thanks to the ingenuity and determination of American workers. To hurt these workers and our country’s entire aviation industry by letting foreign rule-breakers win would be shameful.

Jim Burnley served as the U.S. Secretary of Transportation under President Ronald Reagan from 1987 to 1989. He is a partner at Venable LLP and an adviser to American Airlines.