Jacob Sullum
|
Posted: Apr 27, 2022 12:01 AM
Share   Tweet
The opinions expressed by columnists are their own and do not necessarily represent the views of Townhall.com. 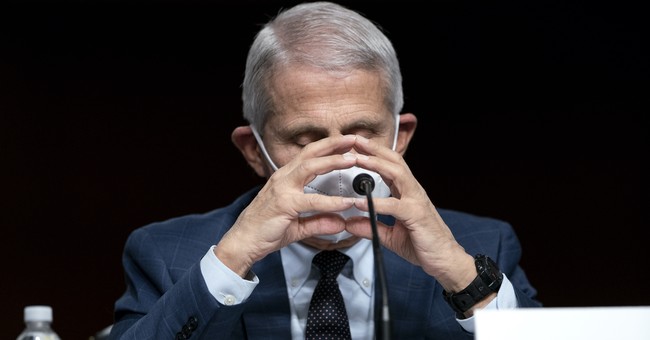 Anthony Fauci was "surprised and disappointed" by last week's ruling against the mask mandate for travelers issued by the Centers for Disease Control and Prevention. "This is a CDC issue," President Joe Biden's top medical adviser told CNN. "It should not have been a court issue."

Fauci, who objects to federalism as well as judicial review, embodies the mild-mannered arrogance of technocrats who assume their scientific expertise trumps the rule of law. Because they believe they know what is best for us, they are dismayed by any attempt to limit their influence or restrain their power.

Fauci did vaguely criticize the substance of U.S. District Judge Kathryn Kimball Mizelle's decision, calling her reasoning "not sound" and "not particularly firm." But his main point was that she had no business determining whether the CDC had complied with the law because courts should not be "getting involved in things that are unequivocally public health decisions."

White House press secretary Jen Psaki concurred: "Public health decisions shouldn't be made by the courts. They should be made by public health experts."

But Mizelle did not make a public health decision; she made a (SET ITAL) legal (END ITAL) decision based on her understanding of the relevant statute. Contrary to Psaki's implication, courts are not only authorized but obligated to make such decisions, as she surely would have conceded had Mizelle ruled in the CDC's favor.

The Justice Department is appealing Mizelle's ruling, but it did not seek a stay that would have restored the mask requirement while the case is pending. Although that omission may seem puzzling given the CDC's claim that the mandate "remains necessary for the public health," it makes sense if the administration's goal is to facilitate future power grabs by keeping the agency's statutory authority as vague as possible.

If there is "no place for the courts" to assess the legality of disease-control edicts, as Fauci maintains, it follows that the Supreme Court erred not only by blocking the CDC's nationwide eviction moratorium but even by taking up the issue. Evidently, it also should have stayed out of the dispute over the federal vaccination-or-testing requirement for private employees, which it likewise deemed illegal.

Fauci's impatience with legal niceties has been apparent for some time. "The states are very often given a considerable amount of leeway in doing things the way they want to do it," he complained in a 2020 interview with BBC Radio 4, "as opposed to in response to federal mandates, which are relatively rarely given."

The result, Fauci explained, was "a considerable disparity, with states doing things differently in a nonconsistent way." That "disparity," he averred, "has been a major weakness in our response" to the pandemic.

The "leeway" that bothers Fauci is required by the Constitution, which leaves states with the primary responsibility for addressing public health threats under a broad "police power" that the federal government was never given. So his beef is not simply with the way COVID-19 policy happened to play out in the United States; it is an objection to our system of government.

That explains why courts heard and sometimes upheld objections to COVID-19 control policies that restricted religious gatherings, the right to keep and bear arms and access to abortion. If Fauci is right that such policies should be left to government experts, all of those interventions were misbegotten, regardless of their legal merits.

"It's a bad precedent when decisions about public health issues are made by people (who) don't have experience or expertise in public health," Fauci told Fox News on Saturday. Americans should be thankful that the courts do not share his confusion.