Don't Hate Me Because I Bag My Own Groceries

Jacob Sullum
|
Posted: Sep 11, 2019 12:01 AM
Share   Tweet
The opinions expressed by columnists are their own and do not necessarily represent the views of Townhall.com. 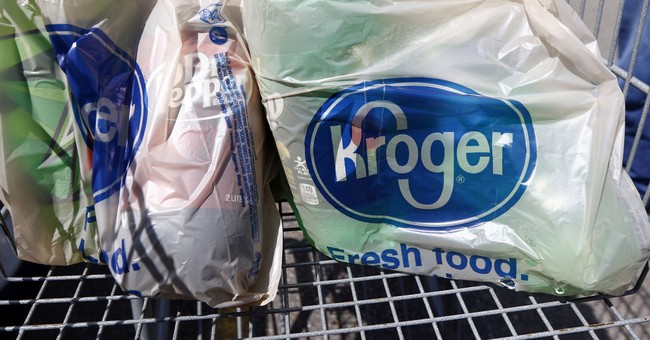 When I buy groceries, I almost always use the self-checkout line. I confess that I did not contemplate the broader social and economic implications of my choice until Tom Chamberlain enlightened me.

Chamberlain, who is the Oregon president of the American Federation of Labor and Congress of Industrial Organizations, last week announced that his organization will soon be collecting signatures for a ballot initiative that would prohibit grocery stores from operating more than two self-checkout stations at a time. His arguments for imposing that restriction point the way to a world in which efficiency-boosting innovations are automatically suspect, no matter how popular they may prove to be.

Chamberlain's Grocery Store Service and Community Protection Act complains that "self-service checkouts essentially turn customers into unpaid employees." But if shoppers universally rebelled at the notion of scanning and bagging their own groceries, a law like this would hardly be necessary.

Personally, I prefer self-checkout because I like to organize my groceries logically, which makes it easier to put them away once I get home. And although I am pretty good at chitchat (a skill developed during the years when self-checkout lines were less common), I'd just as soon avoid the effort.

I recognize that other people do not necessarily share my preferences. "Grocery stores provide many people with their primary place of social connection and sense of community," says Chamberlain's ballot initiative, which argues that "the increasing use of self-service checkouts ... contributes to social isolation and related negative health consequences."

As grocery stores with self-checkout lines still provide live cashiers for people who relish small talk, this objection seems suspect. Chamberlain does not want to assure the availability of a social connection at the supermarket so much as limit the options of shoppers who find companionship elsewhere.

Equally dubious is the Oregon AFL-CIO's claim that "self-service checkouts are often used by teens to purchase alcohol." When I buy beer or wine in the self-checkout line, an employee comes around to verify my age, so this hardly seems like an insoluble problem.

In case you are not convinced that self-checkout machines lead to social isolation and rampant adolescent alcoholism, the Oregon AFL-CIO, getting closer to the heart of its complaint, also argues that they hurt employees (and union membership) by undermining morale, eliminating jobs and replacing full-time positions with part-time ones. Furthermore, "the increasing use of self-service checkouts has a disproportionate negative impact on people of color."

Evidently, shoppers who use the self-checkout line are not only antisocial; they may also be racist, or at least racially insensitive. Yet Chamberlain's logic condemns not just self-checkout stations at grocery stores but all manner of innovations that boost efficiency, reduce prices and increase consumer satisfaction.

As my Reason colleague Christian Britschgi recently noted, the self-service grocery stores that Americans have come to take for granted since the early 20th century, which allow them to pick their own purchases rather than relying on clerks to fetch them, likewise eliminated certain jobs while saving time and money. Grocery shoppers, especially those of modest means, also have benefited from the enormous increases in agricultural productivity that reduced food prices while making it possible to feed a growing population even as the number of Americans working on farms fell from 12 million in 1910 to fewer than 2 million today.

If "lost jobs" were a sound reason to dictate what products and services businesses may offer, we would have to do without a long list of modern conveniences, including ATMs, vending machines, fast-food restaurants, computers, smartphones, video streaming, electronic books and online retailing. Yet such innovations are ultimately good for employees as well as consumers: They may eliminate jobs, but they also create jobs both directly and indirectly, leaving consumers and businesses with more money to spend and invest.

Assuming that the AFL-CIO's initiative qualifies for the 2020 ballot, can we count on Oregonians to see through its economic illogic? As it's still illegal in most of Oregon to pump your own gas, maybe not.