It's Not a Lie If The President Believes It

Jacob Sullum
|
Posted: Jul 06, 2017 12:01 AM
Share   Tweet
The opinions expressed by columnists are their own and do not necessarily represent the views of Townhall.com. 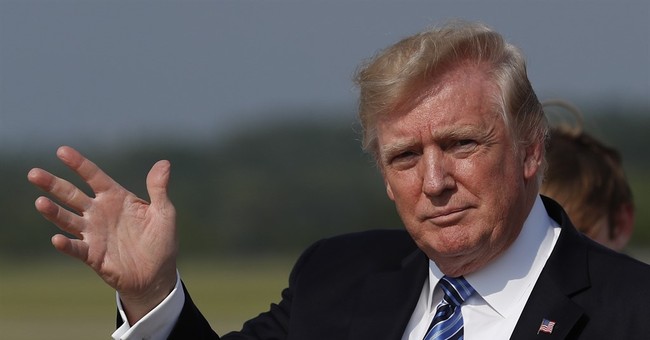 Just as the president has trouble distinguishing between negative press coverage and "fake news," the journalists who cover him tend to treat every inaccurate, unfounded, or even debatable statement he makes as a lie. That mistake, to which I myself am sometimes prone, clouds the judgment and damages the credibility of reporters and commentators who aspire to skepticism but too often settle for reflexive disbelief.

New York Times columnist David Leonhardt recently catalogued "nearly every outright lie [Trump] has told publicly since taking the oath of office." There are a lot of verifiably false assertions on Leonhardt's list, but it's an exaggeration to say every one of them is an "outright lie," which implies that Trump knew the statement was wrong when he made it and said it with the intent of misleading people.

Take Trump's preposterous puffery about the size of the crowd at his inauguration. "It looked like a million, million and a half people," he said the next day in a speech at CIA headquarters.

Four days later, Trump was still marveling at the size of the crowd. "The audience was the biggest ever," he told ABC News anchor David Muir on January 25, standing in front of a photo on the wall in the White House. "This crowd was massive. Look how far back it goes."

Maybe Trump was trying to trick people into ignoring plain photographic evidence that his inaugural audience paled beside Barack Obama's in 2009. But it seems much more likely that he was offering an emotionally tinged, self-flattering impression of his experience as he took the oath of office.

Similarly, Trump's fanciful claims about the size of his Electoral College victory and the millions of phantom fraudulent voters who cost him the popular vote probably are best understood not as lies but as ego-stroking delusions. The ease of disproving such contentions hardly seems consistent with a calculated plan to deceive.

Yet here is the headline that the Times used for its January 23 story about Trump's obsession with voter fraud: "Trump Repeats Lie About Popular Vote in Meeting With Lawmakers." It's not a lie if the president believes it.

Leonhardt likewise deems it an "outright lie" when Trump makes an ill-informed statement on subjects such as the murder rate, the number of people affected by his travel ban, or the adequacy of refugee screening procedures. Sheer sloppiness, combined with a tendency to accept misinformation that serves one's agenda, is a more plausible explanation for such lapses.

Leonhardt's list is also marred by the inclusion of arguable claims that hinge on interpretation. On at least five occasions, for instance, Trump has described a post-election statement by Times Publisher Arthur Sulzberger Jr. and Executive Editor Dean Baquet as an apology to the paper's readers.

Leonhardt counts all five, insisting that the Times "never apologized," which is technically true. But Sulzberger and Baquet did suggest that "Donald Trump's sheer unconventionality [led] us and other news outlets to underestimate his support among American voters," which certainly sounds like an admission of error.

In that same statement, Sulzberger and Baquet promised to "report America and the world honestly, without fear or favor, striving always to understand and reflect all political perspectives and life experiences in the stories that we bring to you"; to "hold power to account, impartially and unflinchingly"; and "to bring the same fairness, the same level of scrutiny, the same independence to our coverage of the new president and his team."

These are noble aspirations. The Times clearly falls short of them when it reports as fact something that is fundamentally unverifiable: the president's state of mind when he says things that are inconsistent with reality. Pointing out the inconsistency is fair and necessary in reporting the news; reaching a conclusion about the president's motive is neither.