A Presidency Consumed by Pettiness

Jacob Sullum
|
Posted: Jun 14, 2017 12:01 AM
Share   Tweet
The opinions expressed by columnists are their own and do not necessarily represent the views of Townhall.com. 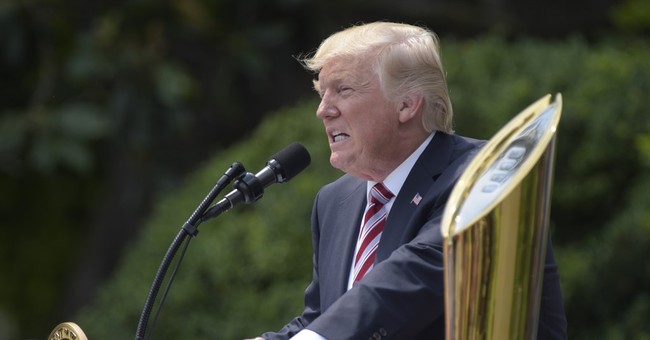 Last month Donald Trump interrupted his own comments on Republican health care legislation to marvel once again at the victory he had won six months before. "I'm president!" he exclaimed. "Hey! I'm president! Can you believe it, right?"

Trump's comical obsession with his own electoral accomplishment is at the root of his current political troubles, including investigations that will hobble him for months, even if they ultimately find no criminal wrongdoing. By constantly revisiting his unexpected defeat of Hillary Clinton and insisting that everyone acknowledge how amazing it was, he may ensure that nothing he does in the White House will be nearly as impressive.

After the election, Trump called his victory a "landslide." It wasn't. As political scientist John J. Pitney Jr. pointed out, Trump's share of the electoral vote ranked 46 out of 58 presidential contests.

Trump said his feat was still impressive because, as he put it last week, "it's almost impossible for the Democrats to lose the Electoral College." That is not true either. If anything, Republicans have a slight advantage in the Electoral College, because Democrats are more concentrated in certain parts of the country and therefore tend to waste more popular votes by far exceeding the threshold needed to win a state.

Trump said he would have won the popular vote were it not for "the millions of people who voted illegally." Nearly every study of the issue has found that voting fraud is rare, and there is no evidence that it happened last year on the scale suggested by Trump.

Even the ridiculous spat over the size of the crowd at Trump's inauguration was a proxy for the debate about how big his victory was. By insisting, contrary to photographic evidence, that something like 1.5 million people showed up, Trump was again suggesting that the official tally on Election Day underestimated his popular support.

All of these Trump-generated tiffs were counterproductive distractions from the president's avowed policy goals. But none compares to the ongoing controversy over the FBI's investigation of Russian meddling in the presidential election, which Trump has magnified because he cannot abide any implied diminishment of the achievement he commemorates by handing election maps to White House visitors.

Trump calls the FBI investigation, which includes possible ties between his campaign and the Russians who hacked emails that made Clinton look bad, a "witch hunt" and a "taxpayer-funded charade." After he fired FBI Director James Comey last month, he admitted that the Russia investigation was a factor, lending credibility to the charge that he was trying to obstruct justice.

"When I decided to just do it," Trump told NBC News, "I said to myself...this Russia thing with Trump and Russia is a made-up story. It's an excuse by the Democrats for having lost an election that they should have won."

Last week, after Comey cited that interview in his Senate testimony by way of explaining his dismissal, Trump returned to the theme. He told reporters that Russia's election meddling "was an excuse by the Democrats, who lost an election that some people think they shouldn't have lost."

Trump is understandably upset about the unproven claim that his associates had something to do with the Russian operation. But what really gets his goat is the suggestion that he would not have won the election without Russian help.

The president was annoyed when Comey publicly acknowledged in March that the FBI was looking at possible links between Russia and the Trump campaign. But he also was angry when the FBI director testified last month that felt "mildly nauseous" about the possibility that his investigation of Clinton's sloppy email practices as secretary of state helped tip the election to Trump.

Both comments irked Trump because they cast doubt on the credit he deserves for the "landslide" that wasn't. If he cannot manage to contain those feelings, his presidency will be consumed by his own pettiness.