Jacob Sullum
|
Posted: Jan 27, 2016 12:01 AM
Share   Tweet
The opinions expressed by columnists are their own and do not necessarily represent the views of Townhall.com. 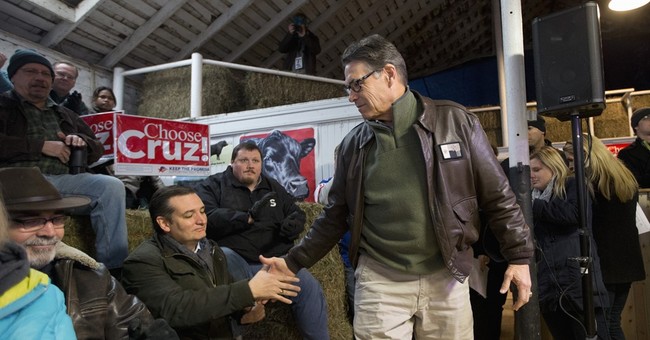 Despite its simplicity, this single-item checklist is a useful test of character -- one that all but two candidates fail. That's because they pass muster with ARF by supporting the Renewable Fuel Standard, a 2005 congressional mandate that forces Americans to buy gasoline mixed with corn-based ethanol. That policy epitomizes the crony capitalism that both major parties decry.

The RFS, which takes money from American motorists and gives it to corn growers and ethanol producers, is good for the farmers and refiners represented by ARF, but bad for pretty much everyone else. All three Democrats and nine of 11 Republicans vying for votes next week in a state where corn is king nevertheless say they want to maintain the ethanol mandate.

The two exceptions, Sen. Ted Cruz, R-Texas, and Rand Paul, R-Ky., are both "bad" in ARF's reckoning because they want to scrap the RFS. Cruz's position has earned him the ire of Terry Branstad, Iowa's popular six-term governor and the father of Eric Branstad, ARF's state director.

"It would be a very big mistake for Iowa to support [Cruz]," the elder Branstad told reporters last week. "I know he's ahead in the polls, but the only poll that counts is the one they take on caucus night, and I think that could change between now and then."

Branstad did not pretend to be standing up for anything but the parochial interests of the ethanol industry. He argued that eliminating the RFS would hurt Iowa's economy because "we have tens of thousands of jobs and a lot of farm income dependent on that."

But Cruz is not running for president of Iowa, and he deserves credit for standing on principle at the risk of losing votes in this important early contest. "I am a passionate supporter of a free and fair energy marketplace," he wrote in The Des Moines Register this month. "Washington shouldn't be picking winners and losers."

Reducing carbon emissions is the main rationale for propping up the ethanol industry by forcing people to buy its products. Yet the net environmental impact of corn-based ethanol may actually be negative, once you take into account its contribution to smog, the carbon released in producing it, and the land cleared and fertilizer used to grow corn destined for gas tanks, which accounts for two-fifths of the U.S. crop.

The RFS raises food prices and imposes a hidden tax on motorists because ethanol is more expensive than gasoline and produces less energy per gallon. Between 1982 and 2014, Manhattan Institute Senior Fellow Robert Bryce found that ethanol cost an average of 2.4 times as much as an energy-equivalent amount of gasoline.

According to Bryce's calculation, that de facto tax amounts to about $10 billion a year, or $47 per driver. That may not sound like a lot, but why should every motorist in America be subsidizing the special interests represented by ARF?

Back in 2002, Bryce notes, Hillary Clinton -- then a New York senator -- accurately described the RFS as "equivalent to a new tax" and said there is "no sound public policy reason for mandating the use of ethanol." She changed her tune when she ran for the 2008 Democratic presidential nomination, and this time around she is also keen on the ethanol mandate.

So is Donald Trump, the Republican front-runner, who opposes "changing any part of the RFS." Other Republicans say maybe it wasn't such a great idea, but scrapping it now would be unfair.

Next to profiles in pandering like these, Cruz should wear the Barnstads' enmity as a badge of honor.