Jacob Sullum
|
Posted: Jan 13, 2016 12:01 AM
Share   Tweet
The opinions expressed by columnists are their own and do not necessarily represent the views of Townhall.com. 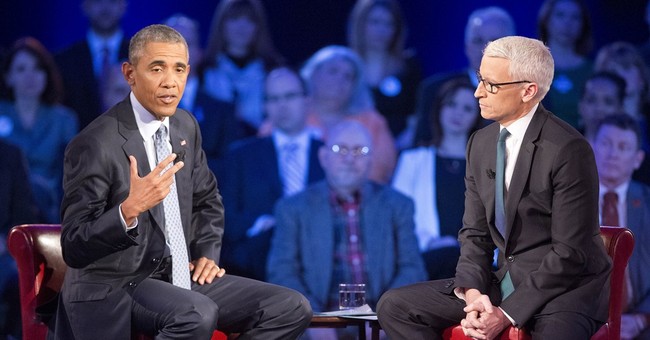 Trending
A lack of background checks for gun buyers plainly had nothing to do with the mass shootings that have grabbed headlines in the last few years. The weapons used in those crimes were purchased legally from federally licensed firearms dealers, which means the buyers passed background checks.

During last week's CNN "townhall" on "Guns in America," President Obama nevertheless continued to tout background checks as a way to prevent mass shootings, which is one of the reasons it is hard to trust him when he talks about common-sense gun safety. At the same time, Obama hinted at a different, more sophisticated rationale for expanding the federal background check requirement, based on the debatable assumption that new regulations can stop ordinary criminals from obtaining guns.

Obama's emphasis on mass shootings is puzzling not only because background checks demonstrably did not stop them, but also because they account for a tiny percentage of gun homicides and an even smaller share of gun-related deaths (two-thirds of which are suicides). Why does Obama keep citing mass shootings as an argument for expanded background checks? Partly because they are scary and get a lot of attention, and partly because his more plausible arguments are more complicated.

Surveys of criminals indicate they rarely obtain their guns from licensed dealers, who are legally required to perform background checks, or from gun shows, where many of the sellers are not. Closing the so-called gun show loophole -- which is actually an exception for gun owners who are not deemed to be "engaged in the business of selling firearms" -- would therefore have little direct impact on criminals' access to weapons.

But Obama argues that it could have an indirect impact. During the CNN special, he suggested the point of requiring more background checks is not so much the checks themselves as the records they leave behind. He said those records could help identify people who buy guns in private transactions at gun shows with the intent of reselling them.

It's not clear how significant such sources are in supplying guns to criminals. A recent survey of 99 jail inmates in Cook County, Illinois, found that they generally obtained guns from friends, relatives or other people with whom they had prior relationships. The guns were pretty old -- 11 years on average -- and changed hands frequently.

In the Cook County sample, theft was rarely the direct source of weapons, but it might be an important indirect source. Back in the early 1980s, a survey of about 1,900 incarcerated felons in 10 states found that 70 percent had obtained their most recent weapon by theft or from a source they knew or believed had stolen it.

According to the Justice Department, more than 230,000 firearms are reported stolen each year, so millions of such weapons are available to criminals. That source obviously would be unaffected by background checks or the records that accompany them.

In a recent study of guns seized by Chicago police, Duke University criminologist Philip J. Cook and three other researchers found that "15 percent of new guns that were sold within two years of confiscation and were taken from male gang members were first sold to a woman." That sort of straw purchase, where someone with a clean record buys a gun for someone else who is not legally allowed to own firearms, likewise would be unaffected by expanded background checks.

It seems the value of expanded background checks in preventing criminals from obtaining guns depends on the extent to which intermediaries who are currently happy to resell firearms with no questions asked will suddenly start keeping records of those transactions if they are legally required to do so. You can see why Obama prefers to talk about mass shootings.