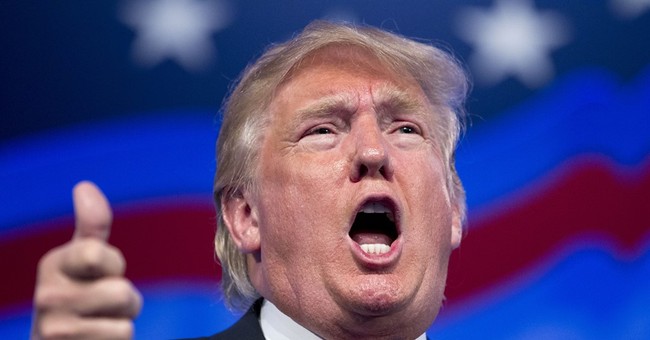 Donald Trump, who in the 1990s tried to force an elderly widow out of her Atlantic City home as part of a plan to expand his casino, now says he is glad she resisted, because it helped him avoid a bad investment. By successfully fighting condemnation of her home, Trump told Breitbart News last week, Vera Coking "saved me a fortune."

That experience has not dimmed the Republican presidential contender's enthusiasm for using eminent domain to advance the goals of wealthy developers like him, which he called "a wonderful thing" in an interview with Fox News. Trump, who is frequently described as a "populist" candidate, thinks it's the prerogative of the rich and powerful to push around the little people who get in their way, provided they have a plan, no matter how ill conceived, that promises "economic development."

The Fifth Amendment allows the government to take property "for public use" as long as it provides "just compensation." But Trump, currently the front-runner for the Republican presidential nomination, reads "public use," which traditionally referred to facilities like roads and bridges, to mean "public benefit," which opens the door to pretty much any business project.

"If you were going to rip down a house and build another house, no way," the billionaire reality TV star told Breitbart News. "But if you're going to build a factory that's going to have 5,000 jobs, that's entirely different."

Trump's comments bring to mind Poletown, a working-class Detroit neighborhood that was razed in 1981 to make way for a Cadillac plant. The factory -- construction of which required the forcible removal of about 4,200 residents, 1,300 homes, 140 businesses, six churches, and a hospital -- created fewer than half the 6,500 jobs General Motors promised.

When the Michigan Supreme Court blessed the destruction of Poletown in 1981, dissenting Justice John Fitzgerald warned that if "the prospect of increased employment, tax revenue, and general economic stimulation makes a taking of private property for transfer to another private party sufficiently 'public' to authorize the use of the power of eminent domain ... there is virtually no limit to the use of condemnation to aid private businesses." 23 years later, the court finally recognized the wisdom of that warning and reversed its Poletown decision, ruling unanimously that economic development is not a valid rationale for compelling people to sell their property.

By then such takings had proliferated throughout the country, and the following year, in Kelo v. New London, the U.S. Supreme Court said they were consistent with the Fifth Amendment. "The specter of condemnation hangs over all property," declared dissenting Justice Sandra Day O'Connor. "Nothing is to prevent the State from replacing any Motel 6 with a Ritz Carlton, any home with a shopping mall, or any farm with a factory."

Kelo v. New London is one of the most unpopular Supreme Court decisions in history, uniting critics on the left and right who deplore the use of government power to help the mighty at the expense of the weak. But Donald Trump is a fan, saying, "I happen to agree with it 100 percent."

It's not hard to see why. Kelo v. New London is bad for people who own homes or businesses on land coveted by developers, but it is good for developers.

In addition to his attempted seizure of Vera Coking's house, in 1994 Trump planned to use eminent domain as part of a harebrained $350 million scheme to transform Bridgeport, Connecticut, into "a national tourist destination." The project fell through, fortunately before anyone's property was condemned.

The residents of Fort Trumbull, the New London, Connecticut, neighborhood at the center of the Kelo case, were not so lucky. Despite the city's "carefully considered" development plan, their homes and businesses were cleared away to make room for nothing.

As Trump now concedes, his casino expansion plan was not such a great idea either. But somehow it was good enough to trump the plans Vera Coking had for her own property.