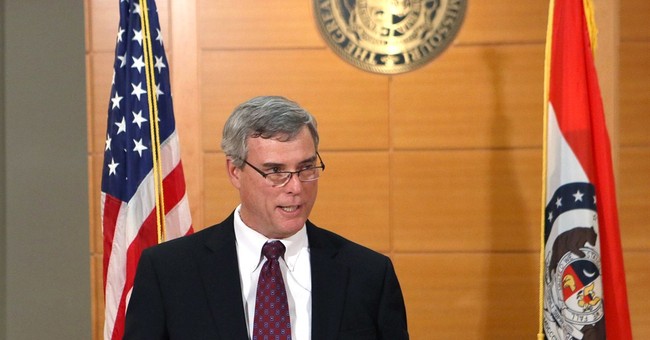 A Justice Department report released last week makes a strong case that Ferguson, Mo., police officer Darren Wilson acted in self-defense when he shot and killed Michael Brown, an unarmed black teenager, last August. The report suggests that Robert McCulloch, the much-maligned St. Louis County prosecutor, made the right call when he decided not to pursue criminal charges against Wilson.

McCulloch nevertheless was the wrong person to make that call. His lack of credibility, as illustrated by the upside-down grand jury process that he orchestrated to clear Wilson, highlights the need for independent prosecutors to review police shootings.

Because they work closely with local police on a daily basis, local prosecutors have strong pragmatic and emotional reasons to exonerate cops who kill people in the line of duty. In McCulloch's case, that pro-cop bias was compounded by his personal background.

McCulloch's mother, father, brother, nephew and cousin all worked for the St. Louis Police Department. When he was 12, his father was killed while pursuing a kidnapping suspect.

Until he lost a leg to cancer as a teenager, McCulloch planned to follow in his father's footsteps. "I couldn't become a policeman," he told the St. Louis Post-Dispatch, "so being county prosecutor is the next best thing."

It was not surprising that McCulloch, who declined to recuse himself from the Wilson case, decided not to prosecute. But he did not want to take responsibility for that decision, so he said he would leave it to a grand jury.

Because it would have been unethical for McCulloch to prosecute a man he believed was innocent, it is unclear what he would have done if the grand jurors had approved criminal charges against Wilson. McCulloch's underlings made sure that did not happen, leading the jurors by the nose to a predetermined result.

Rather than making the case for criminal charges, as prosecutors typically do, McCulloch's assistants seemed intent on discouraging an indictment. The transcripts released after the grand jury's "no bill" decision last November show that prosecutors misstated the legality of shooting at a fleeing suspect, went easy on Wilson while grilling witnesses who undermined his case, and, in an effort to explain the aggression that Wilson said precipitated his use of deadly force, persistently and implausibly suggested marijuana had made Brown irrationally violent.

In a lawsuit seeking permission to discuss the case publicly, one of the grand jurors says the way prosecutors presented evidence -- "with the insinuation that Brown, not Wilson, was the wrongdoer" -- "differed markedly and in significant ways from how evidence was presented in the hundreds of matters presented to the grand jury earlier in its term." The juror also complains that "the presentation of the law ... was made in a muddled and untimely manner."

Not surprisingly, this process, conducted behind closed doors by prosecutors acting like defense attorneys, did not do much to reassure skeptics or placate McCulloch's critics. The voluminous transcripts provided fuel for both sides, and McCulloch's characterization of the evidence was easily dismissed as the self-serving rationalization of a cop-friendly prosecutor.

The DOJ report carries more weight, not just because it presents the evidence succinctly and logically, but also because the FBI and federal prosecutors are less cozy with local cops. The latter factor is important both in making sure prosecutorial decisions are untainted by personal bias and in persuading the public that they are. That's why the President's Task Force on 21st Century Policing recently recommended "policies that mandate the use of external and independent prosecutors" in cases involving police shootings or deaths in custody.

McCulloch's energetic efforts to avoid an indictment of Wilson reinforced the impression that the justice system is rigged in favor of cops, who tend to get a much more sympathetic hearing when they kill people than ordinary citizens do. Making independent prosecutors the standard approach in such cases would not eliminate that problem, but it would help balance sympathy with appropriate skepticism.