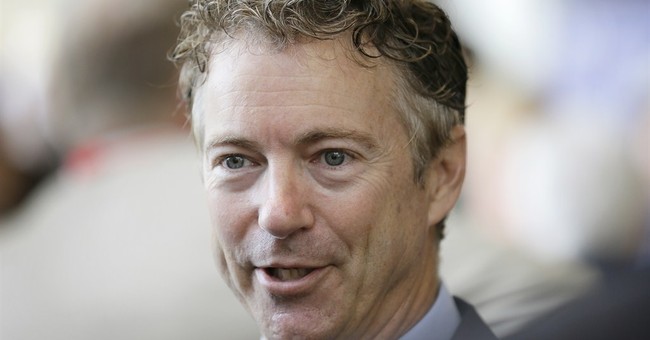 Trending
In 2003, a Nebraska state trooper stopped Emiliano Gonzolez for speeding on Interstate 80 and found $124,700 inside a cooler on the back seat of the rented Ford Taurus he was driving. Gonzolez said the money was intended to buy a refrigerated truck for a produce business, but the cops figured all that cash must have something to do with illegal drugs.

Although there was not much evidence to support that theory, under federal forfeiture law the government managed to keep Gonzolez's money based on little more than a hunch. A bill introduced last week by Sen. Rand Paul, R-Ky., would make that sort of highway robbery harder to pull off.

Civil forfeiture allows the government to take property from people who are never charged with a crime, let alone convicted, based on the fiction that the property itself is guilty. Gonzolez's case, for instance, is known as U.S. v. $124,700 in U.S. Currency.

A federal judge initially rejected that forfeiture. But in 2006, the U.S. Court of Appeals for the 8th Circuit concluded that the government had "demonstrate(d) by a preponderance of the evidence that there was a substantial connection between the currency and a drug trafficking offense."

Preponderance of the evidence, which requires showing that the government's theory is more likely than not to be true, is a much lower hurdle than proof "beyond a reasonable doubt," the standard used in criminal cases. In between is "clear and convincing evidence," the standard that Paul's bill, the Fifth Amendment Integrity Restoration (FAIR) Act, would require for federal forfeiture.

Nebraska, where Gonzolez was pulled over, actually requires proof beyond a reasonable doubt to complete a forfeiture under state law. But police can avoid that requirement, as they did in his case, through the Justice Department's Equitable Sharing Program, which allows them to take advantage of looser federal standards and keep up to 80 percent of the proceeds.

A 2010 study by the Institute for Justice, a public interest law firm that defends property rights and other civil liberties, found that "equitable sharing" is especially common in states with relatively strict forfeiture rules -- strong evidence of what I.J. calls "policing for profit." The FAIR Act would abolish equitable sharing, thereby preventing police and prosecutors from evading state reforms aimed at reducing forfeiture abuse.

Those reforms include channeling forfeiture revenue to functions other than law enforcement, a change designed to eliminate the profit motive that warps police priorities. Similarly, the FAIR Act would assign federal forfeiture proceeds, which last fiscal year totaled more than $2 billion, to the general fund instead of the Justice Department.

The FAIR Act also beefs up protections for innocent owners. It requires the government to prove that the owner of an asset allegedly used to facilitate a crime either himself used the property for illegal purposes, consented to that use or was "willfully blind" to it.

Current law puts the burden on innocent owners to show they did not know about the illegal use or "did all that reasonably could be expected under the circumstances to terminate such use." In other words, property owners are guilty until proved innocent, turning an ancient principle of justice on its head.

These reforms should not only make it harder for the government to take innocent people's property, but also discourage it from trying. The latter effect is important because fighting a forfeiture is arduous and expensive -- so expensive that it typically costs less simply to let the government keep its ill-gotten gains.

Last year, after Russell Caswell succeeded in blocking the federal government's forfeiture of his Massachusetts motel based on drug offenses committed by a tiny fraction of his guests, he said he could not have done it without the pro bono help of the Institute for Justice. As Caswell noted, "The government goes after people they think can't afford to fight." The FAIR Act promises to make such contests less lopsided and less common.