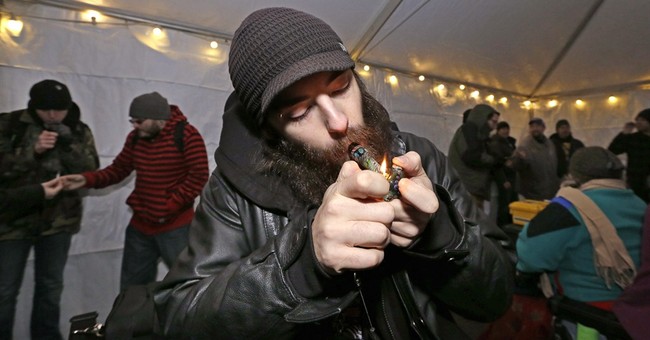 On Monday, less than a week after Colorado's state-licensed marijuana shops began serving recreational consumers, the anti-pot group Project SAM thanked three public figures who "have galvanized our movement." One of them was Tina Brown, former editor of Vanity Fair, The New Yorker and The Daily Beast, whose contribution consisted of this insight, which she offered to her 75,000 Twitter followers last Friday: "Legal weed contributes to us being a fatter, dumber, sleepier nation even less able to compete with the Chinese."

This is what passes for smart commentary among pot prohibitionists. Colorado's path-breaking legalization of the marijuana business has revealed the intellectual bankruptcy of people who think violence is an appropriate response to the consumption of psychoactive substances they do not like.

People like Kevin Sabet, the former Office of National Drug Control Policy official who co-founded Project SAM. Sabet's main strategy for defending prohibition consists of pairing the word "big" with the word "marijuana," based on the assumption that Americans will flee in terror from the resulting phrase.

"We're on the brink of creating Big Marijuana," Sabet warns. That's scary, he explains, because large, legal cannabusinesses will advertise their product and encourage people to consume it. Even so, they seem preferable to murderous drug cartels.

Sabet's group clearly needs all the help it can get. In addition to Brown's tweet, it latched onto a pair of essays published the day after Colorado's pot shops opened. New York Times columnist David Brooks and Washington Post columnist Ruth Marcus, both of whom admit enjoying marijuana in their younger days, nevertheless oppose legalization because some people smoke pot too much, which is especially bad when those people are teenagers.

Brooks concedes that smoking pot with his buddies in high school was "fun," even that "those moments of uninhibited frolic deepened our friendships." Still, "being stoned is not a particularly uplifting form of pleasure." And then there was that time Brooks smoked pot during lunch and flubbed a presentation in English class, "feeling like a total loser."

"I don't have any problem with somebody who gets high from time to time," Brooks says, but "smoking all the time" is "likely to cumulatively fragment a person's deep center, or at least not do much to enhance it." Therefore, the government should "subtly tip the scale to favor temperate, prudent, self-governing citizenship" by kidnapping people at gunpoint and locking them in cages for growing or selling marijuana.

Brooks, keen to protect his deep center and avoid embarrassing public speaking incidents, does not care for pot anymore. But Marcus admits, "I have done my share of inhaling," and she plans to "check out some Bubba Kush" the next time she is in Colorado.

Still, Marcus thinks she should not be allowed to do that -- because of the kids. "The more widely available marijuana becomes," she writes, "the more minors will use it."

Marcus concedes that marijuana is less dangerous than alcohol or tobacco. "The reason to single out marijuana," she says, "is the simple fact of its current (semi-)illegality." In other words, marijuana should be illegal because it is illegal. I believe this is an example of what philosophers call the is/ought fallacy.

What Brooks and Marcus conspicuously fail to do is offer a moral justification for banning marijuana but not alcohol (which poses greater hazards when consumed to excess and is consumed by minors a lot more often), plus every other adult pleasure that Brooks deems insufficiently "uplifting." They do not even seem to understand that a moral justification is needed for using force to suppress an activity that violates no one's rights.

With allies and arguments like these, it's no wonder the prohibitionists are losing. A few days after Brown, Brooks and Marcus galvanized the anti-pot movement with their thrilling defenses of the status quo, CNN announced poll results indicating that 54 percent of Americans think "the sale of marijuana should be made legal."