The Clarity of False Choices 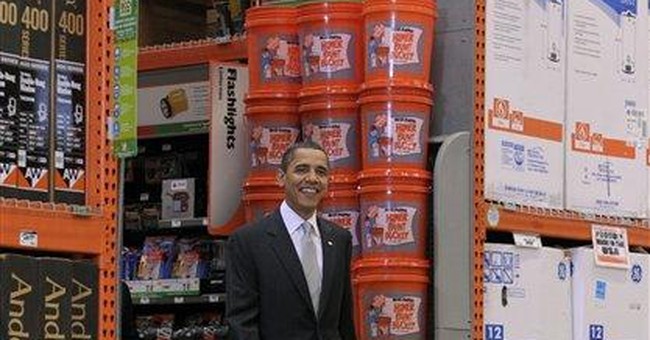 "There are those who claim we have to choose between paying down our deficits ... and investing in job creation and economic growth," President Obama said last week. "This is a false choice." During the same speech, he asked his audience to "let me just be clear" that his administration, having racked up the biggest budget deficits ever, is embracing fiscal responsibility, as reflected in his vow that "health insurance reform" will not increase the deficit "by one dime."

For connoisseurs of Obama-speak, the address featured a trifecta, combining three of his favorite rhetorical tropes. There was the vague reference to "those who" question his agenda, the "false choice" they use to deceive the public, and the determination to "be clear" and forthright, in contrast with those dishonest naysayers. These devices are useful as signals that the president is about to mislead us.

Obama says his opponents wrongly insist that we choose between "paying down our deficits" and "investing in job creation and economic growth." But that is not the way his real critics, as opposed to the imaginary, nameless ones who appear in his speeches, would frame the issue.

The real critics question the premise that the spending Obama supports, which he says ultimately will boost tax revenues and curtail outlays for public assistance programs, should be considered an investment at all -- and, if so, whether it is a better use of this money than the market would have found. Copying his predecessor by throwing more money at education, for example, is a dubious strategy for spurring economic growth, since there is no clear relationship between spending and student achievement.

Likewise, Obama's promise that health insurance subsidies will not expand the deficit may be "clear," but it's not realistic, since it's based on accounting tricks and wishful thinking. Congressional Democrats avoided counting a $240 billion Medicare "fix" by putting it in a separate bill and assumed reimbursement cuts that probably will never materialize.

Here are some other things Obama has asked us to let him be clear about: "Earmarks have given legislators the opportunity to direct federal money to worthy projects"; the U.S. government "has no interest in running GM"; Medicare cuts will be made "in a way that protects our senior citizens" from changes in benefits or costs; and a "public option" for health care, which would invite businesses to offload their medical costs onto taxpayers and could drive private insurers from the market, "would not impact those of you who already have insurance." From now on, when you hear Obama speak, try replacing "let me be clear" with "let me lie to you," and see if it makes more sense.

Speaking of making sense, some of the "false choices" Obama has identified in the last year are more puzzling than misleading. "I reject the false choice between securing this nation and wasting billions of taxpayer dollars," he declared in March. So according to Obama, we can secure the nation and waste billions of taxpayer dollars. Actually, that sounds about right.

What about those who do not like the status quo but have a different vision of reform, not because they want to go farther than Obama does but because they want to go in a different direction, toward more choice, more competition and less government involvement? In Obama's world, they do not exist; instead we have his bold yet achievable plan, pitted against socialist utopianism and blind partisan intransigence. Let me be clear: This is a false choice.