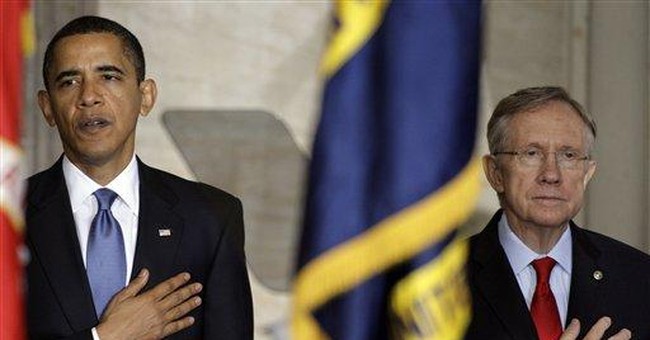 President Obama's promise to raise taxes only on the wealthy was easy to make and easy to break. He broke it barely two weeks after taking office, and he will break it again if Congress passes the health care legislation he wants. But Obama has come up with a strategy to avoid the fate of George H.W. Bush: Although he will raise your taxes, he will never admit he is raising your taxes.

Campaigning in Dover, N.H., in September 2008, Obama declared: "I can make a firm pledge. Under my plan, no family making less than $250,000 a year will see any form of tax increase. Not your income tax, not your payroll tax, not your capital gains taxes, not any of your taxes."

Five months later, Obama signed a bill that more than doubled the federal cigarette tax, which falls especially heavily on the poor. White House Press Secretary Robert Gibbs argued that it didn't really count, because "people make a decision to smoke." Similarly, White House spokeswoman Linda Douglass says financial penalties for failing to obtain medical coverage are not taxes because "a fee would only be imposed on those few who could afford to purchase insurance but refuse to do so."

Douglass likens the individual health insurance mandate to state requirements that drivers have liability insurance and that parents educate their children. But people who violate such laws are subject to criminal penalties. Neither the House nor the Senate health care bill would establish criminal penalties for refusing to buy health insurance, presumably because due process requirements would make it hard to impose them.

Instead, the bills would establish a "tax on individuals without acceptable health care coverage" and an "individual responsibility excise tax," respectively. "If you put something in the Internal Revenue Code and you tell the IRS to collect it," a tax expert told The Associated Press in September, "I think that's a tax."

The president disagrees. "For us to say that you've got to take a responsibility to get health insurance is absolutely not a tax increase," he insisted during a squirm-inducing Sept. 20 exchange with ABC's George Stephanopoulos. "You can't just make up that language and decide that that's called a tax increase." Stephanopoulos responded by literally getting out the dictionary to demonstrate that "a charge ... imposed by authority on persons or property for public purposes" is commonly considered a tax.

If Obama can deny that a charge is a tax even when it's collected by the IRS and identified as a "tax" in the legislation creating it, he surely sees nothing tax-like in the money people are required to spend if they want to avoid that charge. Yet forcing people to buy insurance they do not want so their premiums can subsidize other people's health care looks a lot like a tax-funded welfare program, even if the money does not flow through the public treasury.

Furthermore, when businesses buy government-required health insurance or pay a penalty for failing to do so, that money comes at the expense of employee compensation. "An employer mandate should therefore be labeled an employee mandate," says the Cato Institute's Michael Cannon.

"What we are saying," House Majority Leader Steny Hoyer, D-Md., explained last week, "is everybody will contribute ... to making sure that health care options are available to all of our citizens." So we're talking about a legally required contribution that will be used to provide a government-arranged benefit. If only there were a shorter way of expressing that concept.