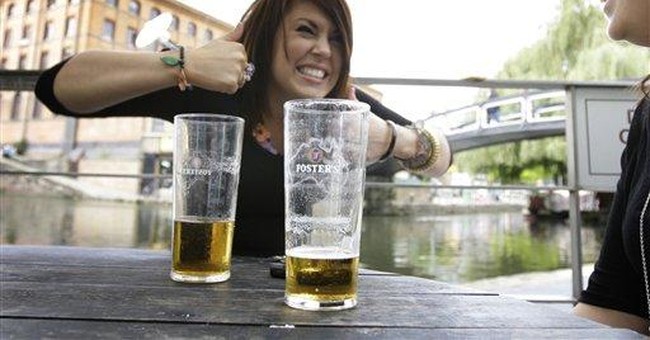 In 1985, when New York raised its alcohol purchase age to 21 under federal pressure, I was a sophomore at Cornell. One day, I was responsible enough to order a beer; the next day, I wasn't.

Nowadays, I'm irresponsible simply for bringing up the subject. Or so it would seem, judging from the way Mothers Against Drunk Driving (MADD) has responded to the 128 (and counting) college presidents who support the Amethyst Initiative, which calls for "an informed and dispassionate public debate" about the drinking age.

"Parents should think twice before sending their teens to these colleges or any others that have waved the white flag on underage and binge drinking policies," declared MADD President Laura Dean-Mooney. The same press release quoted former Secretary of Health and Human Services Donna Shalala, who said, "signing this initiative endangers young lives," and Mark Rosenker, acting director of the National Transportation Safety Board, who said it invited "a national tragedy" that would "jeopardize the lives of more teens."

There are a couple of problems with this syllogism. First, although MADD insists research "unequivocally shows that the 21 law has reduced drunk driving and underage and binge drinking," the picture is not quite so clear.

In 1984, Congress passed a law that threatened to withhold highway money from states that did not increase their drinking ages to 21; by 1988, all of them had complied. Yet according to the government-commissioned Monitoring the Future Study, the rate of "binge" drinking (defined as five or more drinks in a row during the previous two weeks) among both high school seniors and college students peaked in the early 1980s, before the federal law took effect.

Traffic fatalities also were declining before then. In a 2007 paper published by the National Bureau of Economic Research, Harvard economist Jeffrey Miron and Yale law student Elina Tetelbaum note that the traffic fatality rate for 15-to-24-year-olds "has been decreasing steadily since 1969," while "most of the variation in the [drinking age] occurred in the 1980s."

Looking at state-level data, Miron and Tetelbaum find that "any nationwide impact" from raising the drinking age is driven by states that did so "prior to any inducement from the federal government." Even in those states, the effect "did not persist much past the year of adoption." Furthermore, raising the drinking age "appears to have only a minor impact on teen drinking." Miron and Tetelbaum conclude that a drinking age of 21 "fails to have the fatality-reducing effects that previous papers have reported."

Whether or not Miron and Tetelbaum are right, it's neither fair nor sensible to view drinking as tantamount to drunk driving. By MADD logic, if raising the drinking age to 21 saves lives, raising it to 25 or 30 would save even more. Yet when it comes to adults older than 20, the law recognizes that the problem is reckless drinking, not drinking per se.

This is the sort of distinction the Amethyst Initiative's supporters would like to reinforce. They complain that a blanket ban on alcohol consumption by 18-to-20-year-olds, who are considered adults in virtually every other respect, makes it difficult to inculcate responsible drinking habits. They argue that alcohol prohibition on campus has undermined respect for the law, since 85 percent of college students drink anyway, and created "a culture of dangerous, clandestine 'binge-drinking.'"

Treating college students like children has not made much of a dent in the rate of heavy episodic drinking on campus, which has remained around 40 percent since 1993, compared to 43 percent when the uniform drinking age was established in 1988. If the government treats people as if they're irresponsible, it should not be surprised when they behave irresponsibly.