Jack Kerwick
|
Posted: Apr 30, 2016 12:01 AM
Share   Tweet
The opinions expressed by columnists are their own and do not necessarily represent the views of Townhall.com. 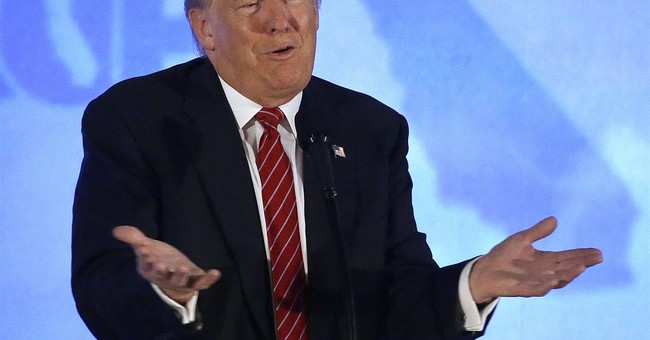 We’ve all heard of PTSD, or Post-Traumatic Stress Disorder.  During this past year, something we can call TTSD has emerged.

TTSD is Trump Traumatic Stress Disorder. It is also known as “Trump-phobia,” for such is the fear of those who suffer from it that the very mention of Donald Trump’s name immediately corrupts their rationality.

Trump’s break out presidential candidacy and the utter inability, in spite of every conceivable attempt (short of assassination), of any establishment apologist to slow it down has led to an epidemic of TTSD among the political and chattering classes.

There are two particularly salient symptoms of TTSD. So as to not confuse them with symptoms of brain damage, it is important to note that they ordinarily only appear within a Trump-specific context.

The first is a pathological failure to perform simple arithmetic. For example, for the longest time the Trump-phobe would insist that because Trump managed to garner “only” 35-40 percent of the vote, this proved that he had a problem. And Trump-phobes around the “conservative” media circuit would repeat this line even while the object of their panic was crushing—not just beating, but slaying—16 competitors (i.e. whomever they were supporting).

Trump has now crashed through this “ceiling” with over 60 percent of the vote—and in a three person race at that.  Thus far, the Trump-phobe has not conceded the faultiness of his or her past calculations.

The second symptom is a chronic penchant for self-contradiction.

The Trump-phobe can be guaranteed to level any and every conceivable ad hominem attack against Trump—regardless of how profoundly one criticism contradicts the other.

At one and the same moment, the Trump-phobe can be counted upon to make comments like the following:

“We need to grow the party by appealing to ‘independents’ and ‘moderates.’”

And: “Too many ‘independents’ and ‘moderates’ are voting for Trump.”

“The Republican Party needs candidates who ‘can reach across the aisle.’”

And: “Trump has ‘reached across the aisle’ too often in supporting Democrat candidates over the years.”

“Trump is ‘really’ [secretly] a ‘liberal Democrat’ or ‘progressive.’”

“Trump is a ‘sexist’ who wants to arrest and incarcerate women for having abortions.”

And: “Trump wants to continue supporting Planned Parenthood, abortion, and every other Big Government program [ostensibly] designed for purposes of ‘women’s health issues.’”

And: “Trump hires [i.e. he creates jobs] for illegal immigrants.”

And: “Trump’s definitely a ‘liberal Democrat’ or ‘progressive,’ for he supports ‘affirmative action.’”

“Trump’s a ‘neo-Nazi’ sympathizer, for he [allegedly] failed to [immediately] repudiate David Duke when the latter paid him compliments.”

And: “Trump is a ‘liberal Democrat’ or ‘progressive’ for having contributed to the campaign coffers of Nancy Pelosi and Chuck Schummer.”

And: “Trump’s ‘New York values’ make him a supporter of ‘gay marriage’ and unisex bathrooms.”

“Trump’s a madman with an erratic temper who will, essentially, get America involved in WWIII.”

And: “Trump’s a protectionist, someone who will make free trade between nations more costly.”

The Trump-phobe contradicts him or herself in many other ways as well.

In spite of having insisted for years and years that scores of Republican conservative voters who were less than enthused over their party’s “centrist” or “moderate” presidential candidates must nonetheless vote for those candidates lest a Democrat gain the White House, the Trump-phobe is now just as insistent that a Democrat president would be preferable to a Republican president—as long as this Republican’s name is Donald Trump.

A Trump-phobe of the GOP variety unequivocally rejects Trump on the grounds that he’s not a real conservative.  Meanwhile, he or she continues to laud President Ronald Reagan as the penultimate conservative, and the quintessential conservative president.   Yet the very “anti-conservative” positions that they attribute to Trump were not only shared by Reagan at different times throughout his career; unlike Trump, who has only ever been a civilian, Reagan had the power to implement those positions.

And implement them he did: As, first, governor of California and, later, a two-term president, Reagan legalized abortion; contended on behalf of “universal healthcare” in the Golden state; raised taxes repeatedly; grew the size and reach of the federal government; amnestied millions of illegal immigrants; appointed left-leaning, pro-abortion Supreme Court justices; and pushed for restrictions on the Second Amendment (“gun-control”).

It’s true that Trump has spoken in support of some of these things at various times throughout his life. But he has done none of them.  Yet to hear the Trump-phobe, one would think that it is Trump, and not Reagan, who walked this “liberal” walk.  Trump is simply insufficiently conservative for supporting some “liberal” positions while Reagan, who actually implemented these positions and others, is a conservative hero—or so the Trump-phobe would have us think.

The Trump-phobe of the Democrat species is no less irrational than his or her GOP counterpart. This Trump-phobe continues to charge the Donald with being a conman, a carnival barker, a liar.  However, if Trump is faking anything right now, presumably he is faking being everything that self-styled “progressives” despise: a conservative Republican.

Yet this, in turn, implies that Trump is really a “progressive” or “liberal Democrat” himself—exactly what the Democrat Trump-phobe supposedly should want!

Trump-Traumatic Stress Disorder is a serious illness.  One should never try reasoning with a Trump-phobe, for the subject is likely to get only more hysterical.