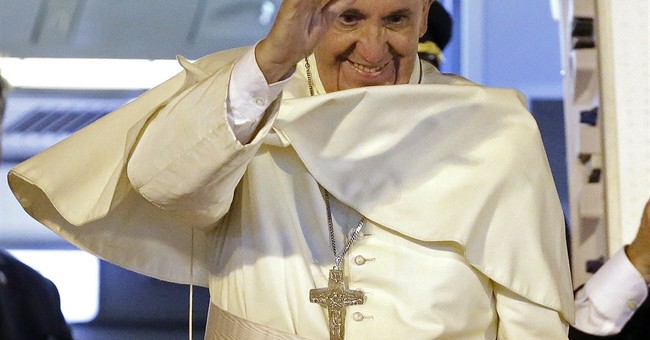 Unfortunately, though, it provokes us to consider the possibility that its author has more in common with contemporary leftism than traditional Christianity.

The Pope’s encyclical read as essentially nothing more or less than a protracted, theologized, reiteration of the same “progressive” drivel that’s been drooled upon us for decades.

For example, Francis writes: “A very solid scientific consensus indicates that we are presently witnessing a disturbing warming of the climatic system” (emphasis added).

Notice, the Pope manages to pack into this one sentence talking points that are part and parcel of the rhetorical arsenal from which his secular counterparts routinely draw: Not only do all, or at least most, scientists agree (“consensus”) that global warming is a reality; they agree that this phenomenon is something ominous, something that is “disturbing.”

And, of course, while conceding that “there are other factors” that could account for this danger, Francis concurs with his secular ideological counterparts in claiming that “a number of scientific studies indicate that most global warming in recent decades” is “due…mainly” to “human activity.”

Fundamentally, from beginning to end, the agreement between Francis and those at home sounding the clarion call on “climate change” is total. “Climate change,” His Holiness continues, “represents one of the principal challenges facing humanity in our day.”

Observe: Among the gravest of problems to which this Pope devotes an entire encyclical is not the unspeakable acts of brutality to which scores of Christian men, women, and children are daily subjected by Islamic militants in countries throughout the Third World, or even the oppression of Christians in such affluent lands as America who are now confronted with legal penalties for failing to violate the dictates of their own consciences by funding abortion services for their employees or accommodating gay wedding celebrations.

It is climate change that holds this distinction.

Francis, predictably, exempts the world’s poor of responsibility for climate change. It is on the shoulders of—who else?—Westerners that he lays the lion’s share of blame. “Many of those who possess more resources and economic or political power seem mostly to be concerned with masking the problems or concealing their symptoms [.]”

In short, we in the West are guilty not only of creating most of this “disturbing warming;” we are guilty as well of evading responsibility for our crime.

By “wasting water,” both Westerners and, to a lesser extent, those in “developing countries” deny the poorest of the world’s poor their “right to life” and “their inalienable dignity.” Access to clean drinking water, you see, is “a basic and universal human right, since it is essential to human survival and, as such, is a condition for the exercise of other such rights.”

Here is another respect in which Francis reveals his leftist proclivities: Rights, he maintains, are entitlements to substantive satisfactions, to resources. Thus, if I am thirsty but haven’t any money to procure a drink, I am entitled to your services just and only insofar as you are able to satiate my thirst. Relieving my thirst now becomes your duty. In failing to fulfill this “duty,” you are now guilty of violating my “right to life” and my “inalienable dignity.”

We can take this logic further. Shelter, presumably, must be “a basic and universal human right” too, for “it is essential to human survival” as well. What this implies is that if you and your family are without shelter, and I have even the slightest room in my home where I live with my family, then regardless of the costs for me that this may entail, I have a duty to accommodate you and yours.

You are entitled to nothing less.

When speaking of the poor’s “inalienable right” to water, the Pope says as much when he speaks of the “grave social debt” that we owe them. And he follows through on the logic of the “positive rights” to which he speaks when he goes on to claim that we can fulfill this debt, at least partially, by way of “an increase in funding” (emphasis added).

Francis insinuates that funding can only go so far as long as there remains “little awareness of the seriousness of such behavior”—wastefulness—“within a context of great inequality.”

Read carefully: Ultimately, it isn’t “climate change” or “global warming” that the encyclical is about. It is inequality, “great inequality,” that is the evil that is the center of attention.

And notice how the Pope implies that in perpetuating or even allowing inequality—again, inequality of resources—we are guilty of violating the right to life of those who have less than us.

Now, it has always been understood that to violate a person’s right to life is to unjustly kill that person. Yet if an unequal “distribution” (another word that Francis is fond of using) of resources is such that it impedes the poor’s access to goods that are essential to existence, then, according to the Pope, the poor’s “right to life” is undermined. But if this is so, then it is those of us who have freer access to these goods, those of us who have permitted this inequality to persist, who are guilty of violating the poor’s “right to life.”

We are, then, in effect, murderers.

A lot more can be said about Laudato Si’. But the one thing that we cannot say about it is that it has anything to do with the Gospel of Christ.