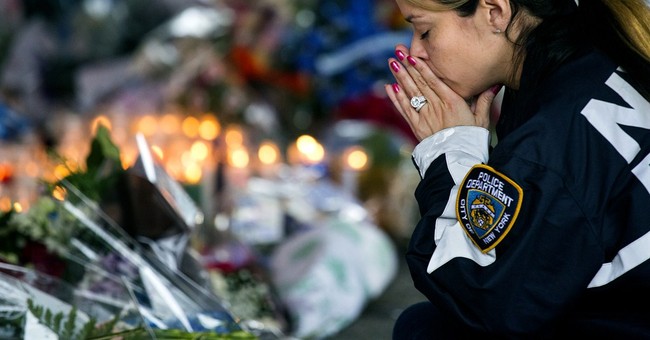 “He was an amazing man. He was the best father and husband and friend.”

This is how a friend described Rafael Ramos, one of the two NYPD officers who was ambushed and murdered by Eric Garner and Michael Brown supporter, Ismaiiyl Brinsley.

Ramos was sitting in a patrol car with his partner, Wenjian Liu, when Brinsley snuck up and blasted both in their heads. The double-murder was premeditated: Hours earlier, Brinsley made the following announcement on Instagram: “I’m putting wings on pigs today. They take 1 of ours, let’s take 2 of theirs.”

Shortly afterwards, the cop-killer turned the gun on himself. Unfortunately, though, his miserable existence ended too late, as his victims were already gone.

Police Commissioner Bill Bratton summed up the grisly event: “They were, quite simply, assassinated—targeted for their uniform.”

Ramos was a married man with two children, a 13 year-old and a child in college. He was an active member of his church and spent his spare time counseling married couples. Not long ago, Ramos—who joined the force in 2012—was a school safety officer.

Officer Liu had been on the force for seven years and had gotten married but two months ago.

At Christmas, two good men, community and family men who, for pay a fraction of that of the Al Sharptons, Barack Obamas, and Eric Holders of the world, regularly risked their lives by entering America’s war-zones—like the Bedford-Stuyvesant neighborhood where they were slain—have been taken by one of the hordes of demons who very recently were calling for “dead cops” in the streets of New York.

Their families and communities, their children, have been devastated.

Yet it isn’t just on the hands of Brinsley that their blood is to be found.

The same media that for decades has labored tirelessly to promote a fiction of perpetual white oppression and black victimhood and that, most recently, elevated thugs Michael Brown and Eric Garner to the stature of heroes—whether sacrificial lambs or freedom fighters—are implicated in the murder of these two police officers.

Like Pontius Pilate who deluded himself into thinking that he could “wash his hands” of his part in Jesus’ death, so too do Barack Obama, Al Sharpton, Eric Holder, Bill DiBlasio, and every other politician, “civil rights activist,” and commentator who did their part to fuel the inferno of anti-police rhetoric think that they can now wash their hands of their responsibility for the murders of Officers Ramos and Liu.

Obama is especially contemptible, for he could’ve been using his unique position to demand—repeatedly, loudly, unequivocally demand—that the hordes of black rioters and thugs in streets in cities around the country renounce all violence or else.

He didn’t even come close to doing anything at all like this. Far from it: Like the good (or bad) “community organizer” that he has always been, Obama exacerbated racial tensions by reinforcing the patent nonsense that white “racism” remains alive and well and police prey on blacks.

It’s a lie and Obama—among the most privileged human beings to have ever walked the planet—knows it.

Neither Obama nor any of the pro-Brown/Garner crowd in Washington, academia, or the media ever once decried the criminals—not “demonstrators” or “protestors,” but criminals—who targeted the property and person of innocents with bloodthirsty violence. Never did they denounce the legions of thugs shouting for the blood of “cops.”

Now, however, Brinsley’s accomplices and enablers are waxing indignant over his murderous violence. All too predictably, the media are trying to depict Brinsley as a “mentally ill” person with a “troubled” past, an anomaly.

But the (thankfully) late Ismaiiyl Brinsley was no more or less ill or troubled than the Brinsleys in the precincts of politics, academia, and the media who encouraged him. The only difference between the former and the latter is that while those who regard police as “racists” or “armed enforcers” of “the State” talk the talk, Brinsley actually walked the walk.

And two good men are now gone and their families devastated.