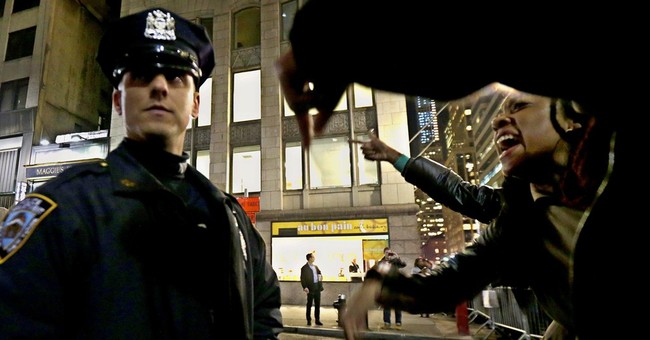 Reactions have been predictable. The misnamed “protesters” are in reality barbarians for whom such hallmarks of civilization as the rule of law are obstacles to consolidating their power over the rest of us, barbarians, mind you, who block traffic when they aren’t sending other Americans’ dreams up in smoke along with their businesses and livelihoods.

Unsurprisingly, the usual suspects in the leftist media have been laboring tirelessly to express their solidarity with the vandals.

More disappointingly, so too have those who should know better, namely those who are often seen as being on “the right,” both “conservatives” and “libertarians.” Indeed, the emoting and presuming emanating from virtually all quarters has reached epic proportions.

(1) Eric Garner was not—was not—killed because he was selling loose cigarettes. He died because he was resisting arrest. The officers on the scene used such force as they deemed necessary to subdue him.

But, the objectors reply, Garner was only selling cigarettes. If not for the astronomical taxes that have illegitimately been imposed upon cigarettes, there never would’ve been a black market for the “loosies” that Garner was peddling. In other words, while Garner was breaking the law, the law in question was “unjust” or “immoral,” for adults should be able to smoke without paying confiscatory tax rates (or something along these lines).

Thus, Garner never should have been confronted by the police.

Just recently I argued in this column that recreational and/or other drug use should be decriminalized, that laws designed to “save people from themselves”—e.g. drug laws—are radically antithetical to liberty: I am the last person from whom one could expect an argument in support of the laws that made Garner’s “trade” a crime. That being said, it is a crime, and, by definition, then, Garner was a criminal, however “petty.”

The police do not make laws. Their first duty is to enforce them. In this case, they were responding to a complaint about Garner, a man who had dozens of arrests already under his belt. If he felt that he was being hassled or arrested unfairly, then Garner had legal redress via the Civilian Complaint Review Board. The now retired Bo Dietl, perhaps the most highly decorated police officer and detective in the history of the New York City Police Department, describes the latter as a “well-oiled machine [.]”

The point is that in resisting arrest rather than fighting it later, the 6-foot-3, 350 pound Garner invited a physical confrontation with the arresting officers.

(2) The officers did not kill Garner with a “chokehold.” Officer Pantaleo placed Garner in a headlock, a move that is neither illegal nor in violation of NYPD protocols.

The aggrieved and their accomplices in the press, the self-righteous, are having none of this. From the time this incident first occurred to the present day, they insist upon mischaracterizing the police’s action as a “chokehold.”

It was no such thing.

However, as Bo Dietl explains: “To be a chokehold, there must be constant pressure on a person’s neck, compressing his windpipe or cutting off the flow of blood to the carotid artery, rendering him unconscious.” Yet it is “obvious” from the video, as Dietl notes, that “the arresting officer put his arm around Garner’s neck to bring him to the ground [.]” Upon achieving his objective, Garner can be heard while he is already on the ground claiming that he can’t breathe. It was then that the officers called for help.

Moreover, Dietl refers to a “top medical examiner” who confided in him that, given Garner’s variety of obesity-related health issues, like heart disease and asthma, it was “very irresponsible” for the Medical Examiner’s Office to declare Garner’s death a “homicide” by “chokehold.”

(3) The grand jury that chose not to indict Officer Pantaleo on any of the charges on which they could’ve indicted him was composed of 23 people. Nearly two dozen strangers were thrown together for an extended period of time and exposed to mountains of evidence of every conceivable type—including the eye witness testimony of the 22 or so people who witnessed the events in question, the video of the confrontation, Officer Pantaleo’s own testimony, etc. Only 12 jurors were needed for an indictment to be served. The prosecutor couldn’t even get that. These strangers—as well versed in the facts of the case as anyone, and infinitely more so than most of those now criticizing them—concluded that the facts did not warrant an indictment of any sort.

To this, the only objection, as far as I can determine, is that the grand jury is wrong. From Al Sharpton to Charles Krauthammer to others of a libertarian bent, with one voice this is their cry.

As even the left-leaning Christian Science Monitor concedes, it is “not difficult” for prosecutors to secure indictments. Citing the Bureau of Labor Statistics’ 2010 numbers, it reports that prosecutors sought indictments in approximately 162,000 cases. In all but eleven of these, grand jurors failed to deliver.

In a country that was more devoted to individual liberty, perhaps Eric Garner would still be alive.

And if critics of the grand jury decision not to indict Officer Pantaleo were more devoted to truth, as opposed to their own ideological fantasies, perhaps they would recognize that justice was indeed served.eric garner