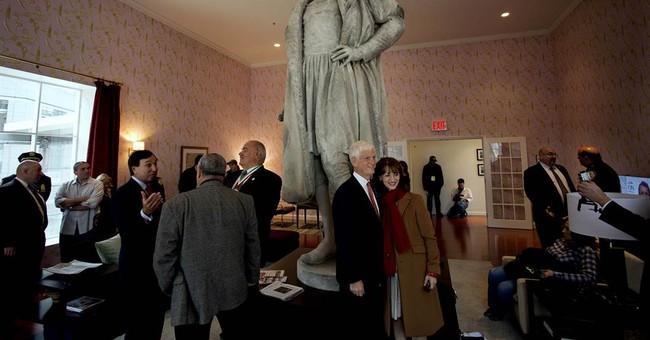 Few holidays are as “politically incorrect” as is the day that Americans reserve to commemorate the birthday of Christopher Columbus. Such is the ferocity of the smear campaign to which Columbus has been subjected for decades that he has been made into a villain among villains in the rogues’ gallery of history.

Geoffrey Symcox, of the Medieval and Renaissance Center at the University of California at Los Angeles, says of Columbus that while a “brilliant mariner,” he was nevertheless “an unrelenting social climber and self-promoter who stopped at nothing—not even exploitation, slavery, or twisting Biblical scripture—to advance his ambitions [.]” He continues: “The fact that Columbus brought slavery, enormous exploitation or devastating diseases to the Americas” has always been ignored by scholars and laity alike, for all that mattered is that he was “the great bringer of white man’s civilization to the benighted idolatrous American continent.”

“Native American” activist Ward Churchill—the same disgraced University of Colorado professor who made national news when he referred to the thousands who lost their lives on September 11, 2001 as “little Eichmanns”—wrote that Columbus Day celebrations rank “very high” among those “expressions of non-indigenous sensibility” that “contribute to the perpetuation of genocidal policies against Indians [.]”

Russell Means, an American Indian activist, once said that next to Columbus, Hitler “looks like a juvenile delinquent.” And during the 500th year anniversary of the Columbus’s discovery of the New World, the National Council of Churches released a statement imploring Christians to abstain from celebrating. “What represented newness of freedom, hope, and opportunity for some,” the statement read, “was the occasion for oppression, degradation and genocide for others.”

There are a few things to note about the bad press that Columbus began receiving in the second half of the 20th century.

First, this campaign against Columbus—and that’s exactly what it is, a campaign—is not inspired by any disinterested pursuit of historical accuracy. In fact, none of this is about history at all. Rather, like so much else of what passes for “history” today, it is nothing more or less than “retrospective politics,” as the English philosopher Michael Oakeshott once labeled the enterprise of dressing up brute partisan polemics with references to “the past.”

This brings us to our next point. A real historian should try as much as possible to resist making any moral pronouncements regarding the characters of his subjects. Those who seek to reduce Columbus to a caricature of evil personified reduce themselves to the simplest of polemicists. And that Columbus’s critics are practically to a man and woman of the same leftist political orientation should be more than enough to establish that they seek to promote an ideological agenda.

And what is this ideological agenda? At this juncture in our civilization, most people who pay any attention to these matters know well enough the answer to this question.

The campaign against Columbus isn’t about history, it is true, but, ultimately, it isn’t even about Columbus.

It is nothing more or less than a wholesale condemnation against Western civilization.

As “community organizer” extraordinaire Saul Alinsky knew well enough, to be successful, the organizer must concretize the abstract institutional arrangements against which he rails by giving them a face. “The System” is too vague. The organizer, to be effective, must single out a specific target for attack.

Columbus’s detractors are the Western world’s malcontents. In convicting this white, Christian man, Columbus, of the worst of sins, his enemies hold him up as the quintessential poster boy for all Westerners of European stock. Columbus is merely a symbol of the brutal racial oppression upon which the West was founded.

Anyone who doubts this thesis need only consider that the same kind of charges made against Columbus—he was an “exploiter,” a “racist,” an “enslaver,” and a “genocidal murderer”—have been made by leftists against any number of people traditionally regarded as Western heroes. Many of America’s Founders are a case in point.

The effort to discredit Columbus is of a piece with the effort to discredit Western civilization itself. It is a part, an integral part, of a movement to demoralize Western peoples by depriving them of those of their heroes who have occupied a particularly esteemed position in their collective consciousness, those of their heroes who signify for them some of the noblest, the most essential, moments in the life of their civilization.

That there were indeed injustices visited by Europeans against the Indians is undeniable. It is no less true that to know only this is to know virtually nothing. For now, suffice it to say that Columbus was no saint. However, neither was he a villain. He was a man whose vision and courage contributed immeasurably to the world, “the New World,” from which countless numbers of peoples have been reaping endless blessings for centuries.