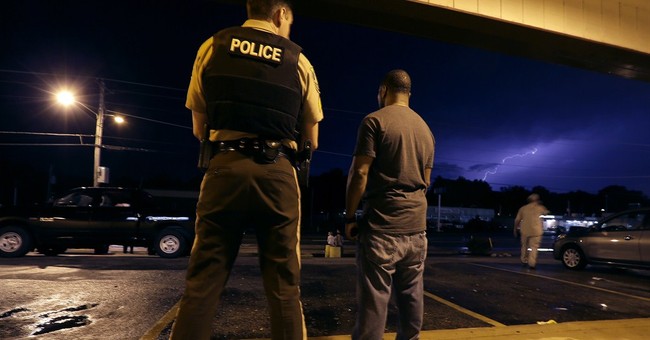 As if the happenings in Ferguson, Missouri aren’t bad enough, now we have the situation in Salt Lake City, Utah with which to contend.

As the whole country knows, for the last week or so, large groups of blacks have taken to the streets of Ferguson in order to express their outrage over the shooting death of a young black man, 18 year-old Michael Brown, by a white 28 year-old police officer, Darren Wilson. Mayhem and violence have been the order of the day. President Obama has weighed in on the issue, describing it as “heartbreaking.” Attorney General Eric Holder has promised that “change is coming.”

On Wednesday, August 20, a white woman—a lone Darren Wilson supporter on the streets of Ferguson—had to be taken into police custody for fear of her life as swarms of angry blacks began to close in on her. In addition to being screamed at, she was reportedly assaulted because she dared to sport a sign that read: “Y’all need to get your facts straight.”

Now, however, word has gotten out that there has been another police shooting of a young, “unarmed” man out in Salt Lake City, Utah. Only this time, the man killed is white and the police officer who shot him is—wait for it!—black!

On August 11, 20 year-old Dillon Taylor was outside of a convenience store with two other men when he was approached by police. The latter were allegedly on the scene in response to reports that an armed man was waving a gun. According to witnesses, Taylor was wearing earphones and may have been trying to pull up his pants when an officer shot him dead.

Taylor did have a criminal record consisting of felony robbery and obstructing justice convictions. Yet a woman, Marissa Martinez, whose sister had at one time dated Dillon, swears that he was in the process of amending his ways. She characterizes his fate as “heartbreaking,” for “he was trying to do better for himself.” And yet, Martinez asks, “this is what happens to him?”

Taylor’s aunt, Gina Thayne, insists that the police “killed an innocent kid,” a fact, she assures us, will indeed see the light of day in the event that the video of the event that police claim to possess is disclosed.

Chris Burbank, the police chief, refuses to reveal either the name of the officer or any other details, asserting that it would not be “appropriate” at this time to do so.

Notice both the similarities and differences between this case and the situation in Ferguson.

(1)There is an inter-racial encounter between law enforcement officer and a suspect.

(2)The suspect is allegedly “unarmed.”

(3)The officer opens fire upon the allegedly “unarmed” suspect.

(4) The allegedly “unarmed” suspect is shot and dies.

(1)In Ferguson, the officer is white and the suspect is black.

In Salt Lake City, the officer is black and the suspect is white.

(2)Courtesy of media outlets around the country that have been tirelessly bombarding audiences with coverage of events in Ferguson, everyone and their mother now knows the names of Michael Brown and Officer Darren Wilson.

No one outside of Salt Lake City has ever heard of Dillon Taylor, and no one even there has yet any clue as to the identity of the black police officer who killed him.

(3)Legions of rabble have crawled out of the woodwork to terrorize—yes, terrorize—the town of Ferguson under the pretext of securing “justice” for Michael Brown. People have been viciously beaten, law enforcement attacked, and businesses burnt to the ground. And their apologists from the Obama administration to the Missouri Governor’s mansion to the media have shown expressions of solidarity for the rioters.

There has been absolutely no rioting or violence of any kind in reply to the shooting death of Dillon Taylor. There hasn’t even been much in the way of demonstrations of any sort.

(4)Michael Brown, we now know, was a criminal who engaged in the strong-arm robbery of a convenience store owner just moments before he attacked and beat the police officer who shot him

(5)The police chief in Salt Lake City is observing protocol, to say nothing of protecting one of his officers, by refraining, at this time, from disclosing the identity of the officer involved in the fatal shooting of Taylor.

The authorities in Ferguson, due to pressure by the lynch mob that is further ruining the quality of life in this once nice suburb of St. Louis, have unveiled Darren Wilson’s identity, forcing this young, decorated officer and his family to go into hiding.

The juxtaposition of these two situations is instructive, for it establishes beyond a doubt that among the motives driving the pro-Michael Brown forces in politics, in the media, and in the streets of Ferguson, a desire for truth and justice isn’t one of them.