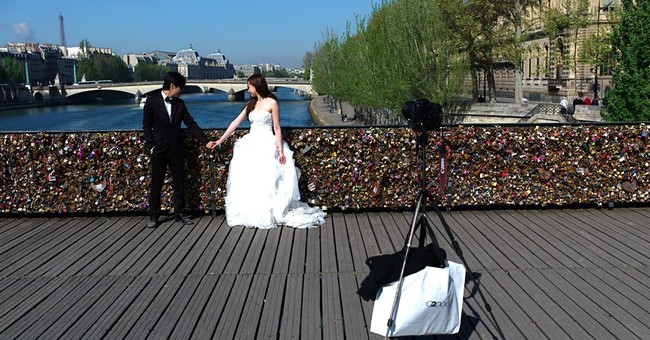 Referencing a questionnaire on the dating site OkCupid, Salam expressed his shock over just how many people admitted to having “strong same-race preferences.” “One would think,” Salam writes, “that many people who do have such preferences would either choose not to disclose them publicly, or choose to skip the question entirely.”

Such people are “clueless,” Salam continues, for “the moral appropriateness” of their practices is questionable.

And, of course, “racism” (at least when indulged in by whites) is the worse.

Government policies designed to combat “in-group favoritism” are bound to fail, Salam laments, for “in-group favoritism is a powerful human impulse.” Thus, it’s more feasible for all decent, respectable types to simply aspire to “expand the boundaries of the in-group [.]” Approvingly referring back to “one of the more provocative Ph.D. dissertations I’ve ever read”—The Duty to Miscegenate—Salam explains how this can be done. First, and most obviously, is by way of interracial procreation. He also asserts the need for more "inter-dining." "The rural white Southerner," he remarks, "who dines with nonwhites as a matter of course is doing more to tackle stigma than the urbane white hipster who hardly ever does the same."

Salam concludes his essay by underscoring that "it’s [not] too much to ask those who do express such [same-race] preferences, and those who live them in practice, to reflect on them, and on how there might be more than fighting racism than voting ‘the right way.’"

That Salam’s article could make it out of a college freshman course in critical thinking or ethics without being saturated in red ink, let alone be published in a widely read venue (however much of a rag), is a truly scandalous commentary on the intellectual and moral state of our culture. That he considers himself a "conservative," and is so considered by the folks at National Review (and beyond?), speaks volumes about the state of contemporary "conservatism."

It should be noted that Salam nowhere supplies an argument for his thesis that intra-racial dating is "racist." Rather, he stacks the deck in favor of his conclusion from the very outset, and he does so through not one, but two, logical fallacies.

Yet at one and the same moment, Salam also resorts to the old tried and true—but logically illicit—tactic of the ad hominem attack. Those who disagree with him aren’t just in error, and they aren’t just immoral: they are racist. Salam, like every other inhabitant of the planet Earth in 2014, knows all too well that the charge of “racism” serves to simultaneously place the accuser on the side of the angels and the heads of the accused on the chopping block.

There are two other points.

First, if intra-racial dating (at least when practiced by whites) is “racist” and, hence, morally reprehensible, then those of us of racially homogenous backgrounds (at least if we are white) must reckon with the fact that our parents and grandparents were “racist” and, hence, morally reprehensible. Our very existence is questionable—the legacy of a crime, as it were—for if not for the “racism” of our ancestors, we would not be.

Second, it is true that Salam—a so-called “conservative,” mind you, and a writer for National Review—does not think that government should intervene to prevent or reduce intra-racial dating. However, this is only because he doesn’t think it is feasible. In other words, in theory he supports such action, but in practice he regards it as an exercise in futility.

This would be frightening stuff to hear coming from anyone’s lips. It’s that much worse coming from one who is promoted as being a conservative.

The verdict is decisive: If Salam is any indication of the intellectual and moral fiber of the contemporary conservative movement, the movement is all but worthless.

This piece has been updated to correct the spelling of Reihan Salam's name.