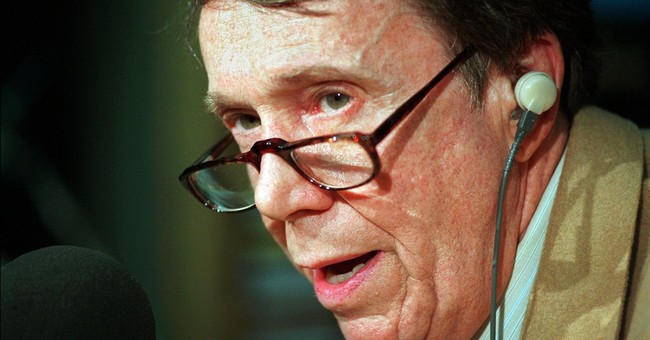 Bob Grant, the one-time “king of conservative talk radio,” died this past New Year’s Eve at the age of 84.

Born Robert Ciro Gigante, Grant had a storied career in radio spanning over six decades, and remained number one in the New York market even after friend, colleague, and admirer of Grant’s, Rush Limbaugh, took the talk radio world by storm. As Rush once attested, there would be no “conservative” talk radio if not for Bob Grant. “Bob Grant is the king of talk radio in New York,” “one of the few talk show hosts who has lasted in combat radio. He defined it and spawned countless imitators all over the country,” Rush noted.

Even President Reagan was among the legions of people who loved Grant’s straight shooting, going so far as to personally “salute” him for his “dedication.”

In the mid-90’s, New York magazine did a hit piece on Grant, plastering his face on their cover with the words: “Why He Hates Blacks.” Grant was devastated. In his book, Let’s Be Heard, Grant relays what actually transpired while being interviewed for the “rag” that would besmirch him. Upon being asked as to whether he was a racist, Grant responded by saying that while he “could answer it by saying, ‘No more than you are,’” instead he will just say that “if being against affirmative action and busing, if being for civil rights for all people—including whites—makes me a racist, then I plead guilty.”

Though Grant’s remarks were a far cry from an expression of racial hatred, or any sort of hatred, his nemeses demanded his head on a platter. Later that year, they got it.

President Clinton’s Commerce Secretary Ron Brown—a black man—was on board a plane that crashed. Brown, along with everyone else, died. Initially, though, reports were vague—and, as it turned out, incorrect, for the word was that there was a lone survivor. On the air, Grant said that his “hunch” was that Brown was the survivor. Grant attributed this intuition of his to the fact that, “at heart,” he was a “pessimist.”

Under the pressure or race activists, WABC fired their most popular talk show host. Soon after, though, he was hired by WOR—another New York mega-station.

Grant’s opposition to leftist nonsense was second to none—and he never hesitated to let this fact be known in no uncertain terms. Yet he also wasn’t reluctant to criticize his colleagues on the right and in talk radio.

He loved Rush Limbaugh (and years later, Sean Hannity and Mark Levin). But in his 1996 book, Grant includes the chapter, “Ten Conservatives We Can Live Without.” Here he describes Bill Bennett as “a smart man with a keen mind and the manners of a bull in a china shop.” Bennett, along with Jack Kemp—another “conservative” who “we can live without”—attempted to defeat Proposition 187, a California initiative designed to prevent illegal aliens from availing themselves of all state social services. Bennett, Grant writes, “hurt the valid conservative cause of limiting immigration, and he brought aid and comfort to those twin hazards, Dianne Feinstein and Kathleen Brown.”

Pat Robertson, Ollie North, George Will, and G. Gordon Liddy are some others who Grant takes to task.

Interestingly, the one person on the right for whom he reserved the harshest condemnation is none other than Dennis Prager.

During the controversy that New York magazine manufactured, Grant admits to feeling lower than any at other point in his life. He had refused to do any more interviews—until Prager, who was not yet a syndicated talk radio host, invited Grant to appear on his Los Angeles television show. Because Prager was, as Grant understood him, “a fairly conservative fellow,” and because they even shared the same manager, Grant agreed to do the show.

He writes: “My understanding was that we were going to discuss the thing as two colleagues—you know, ‘Hey Bob, how do you feel about all this ruckus?’” Instead, Prager held up “the damned magazine cover and then proceed[ed] to recite the slanderous charges against me exactly as they were made: ‘He’s called blacks savages! He’s done this! He’s done that! Bob—what do you say about it?’” Even worse, Prager brought on a representative of the New Jersey chapter of the NAACP, a person who, according to Grant, had “more genuine hatred for me than any other human being in the world today.”

Grant admitted that “it’s hard to imagine anything worse than being on that show that night.” He called it “a total and complete hatchet job,” and referred to Prager as “a son of a bitch and a snake.”

With Grant’s judgments, reasonable people can take exception. But no one can disagree with the verdict that he was one of a kind, and that the media are not likely to see the likes of his honesty, courage, and passion ever again.