Jackie Gingrich Cushman
|
Posted: Sep 14, 2017 12:01 AM
Share   Tweet
The opinions expressed by columnists are their own and do not necessarily represent the views of Townhall.com. 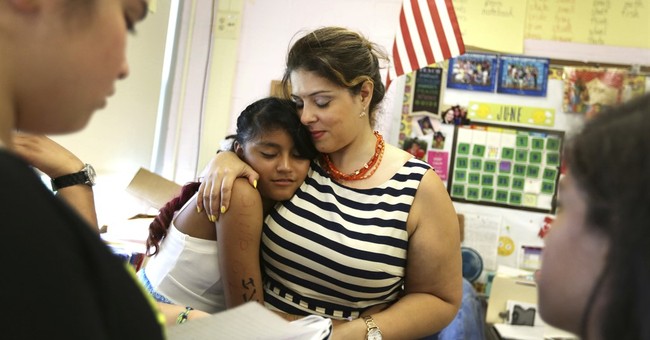 In the past two weeks, our country has endured two hurricanes. They are reminders that, in a world where we attempt to plan and control, to be the masters of our destinies, we are all too often at the mercies of a greater power. During times of natural disasters, people rush in to rescue others, either through personal action, donations or thoughts and prayers. We have the courage to care and to help others, often at our own expense.

The immense devastation, the potential for those we know and love to be involved, the knowledge that the people affected did not create the disaster, and the ongoing media coverage make it easy for us to care, to connect and to compassionately reach out to assist. And we do.

Imagine the difference we could make if we displayed this same courage to care on a daily basis. According to an article published last month by the Gallup Organization, "Creative Caring: A Back-to-School Success Strategy," caring makes a difference. The "analysis revealed that having a caring adult at school is linked to a greater likelihood of self-reported excellent grades at school, and this relationship is strongest for high school students."

The Gallup 2016 student poll results, (conducted via web Sept. 26-Oct. 28, 2016, more than 900,000 students in the United States and Canada), "suggest that, regardless of the school type, location or configuration, showing care for kids can make a big difference in their engagement at school."

While this might appear obvious, unfortunately, "about one-third of surveyed students were either neutral or disagreed [that there was an adult at school who cared about me], suggesting that many students will show up on the first day of school this fall unsure whether the adults at their school care about them."

If that is true, then more than 18 million of the 55 million students going to school this fall nationwide may not believe that an adult at their school cares about them.

As students grow older, the belief that someone cares about them tends to decline. "Two-thirds of fifth-graders surveyed strongly agreed that adults at school care about them, only about one in four 11th-graders said the same." It should be no surprise that engagement at school also falls off as students get older. It's hard to be engaged when you think no one cares.

For decades, my mother was a high school math teacher at various public schools. She was known for being tough but fair, but brought more to her work than that. She also had the courage to care. When a former student, Lance Ozier, who had become a teacher, was awarded the Oglethorpe University Young Alumnus of the Year in 2010, she was invited to the banquet as his guest. When asked about her effect on his life, Lance replied, "She meant business in her class, but never at the expense of the human element. She cared. And everyone knew it. When I graduated, she gave me 'Oh, the Places You'll Go!' by Dr. Seuss, and wrote inside the front cover, 'Grow! Expand! Keep learning!...'" She cared but also challenged. "She wanted me to go places, just like I wanted my students to do," Lance concluded.

It should not come as a surprise that the connection among caring, engagement, and outcomes also applies to college students, according to Gallup. "Having caring professors is one of six key college experiences linked to important alumni life outcomes, such as employee engagement and well-being," the pollster concluded.

Caring's importance does not end when school ends. Instead, the connection continues on the job. "Gallup's workplace engagement research shows that having a supervisor or someone at work who cares about you is a critical employee need. Teachers and staff need to feel cared for to cement their engagement with work and maximize their chances for success."

As this month's hurricanes have shown, it's easy to care when the need is overwhelming, obvious and immediate. It's harder to care on an ongoing basis, especially if you don't feel as though anyone cares about you. Caring requires that you be vulnerable, open to help, and receptive to conversation. It means that sometimes you'll be disappointed, possibly even heartbroken, by the result of your engagement. But that is when courage comes into play.

To care, even when you know it might not make a difference that particular day, takes courage. And that's exactly what we need more of on a daily basis.

How Did This Ever Get Published? NYT Video Takes a Blowtorch to Blue States
Townhall
'Tell us you're a racist elitist without saying you're a racist elitist': Ana Navarro DRAGGED for tweeting racist AF meme on Thanksgiving
Twitchy
Joe Biden Moves to Completely Screw You at the Pump
Redstate
Whose Land Did Native Americans Steal Before Europeans Stole It From Them?
PJ Media