Thanksgiving is a Time to 'Heal the Wounds of the Nation'

Jackie Gingrich Cushman
|
Posted: Nov 24, 2016 12:01 AM
Share   Tweet
The opinions expressed by columnists are their own and do not necessarily represent the views of Townhall.com. 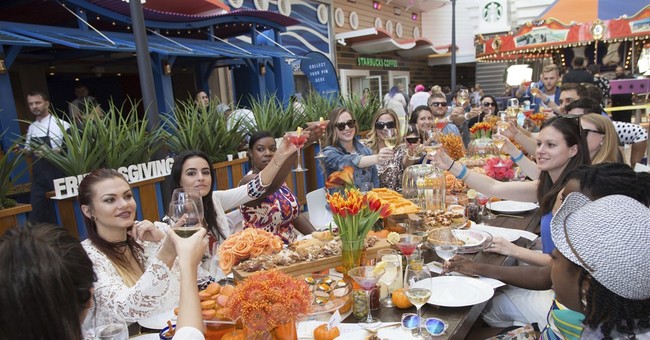 Before I talk about how a holiday unique to the United States could serve to heal the wounds of a nation, it may help to consider how we got here.

George Washington started our day of thanks, Lincoln made it official and Franklin Roosevelt set the date in stone.

Over the years, it has evolved into a day of family gatherings, feasting, football and the last respite before the start of the Christmas shopping season. The focus for many of us is on spending time together rather than giving gifts or attending cocktail parties.

Thanksgiving began in 1621, when the Pilgrims invited the Wampanoag Indians to join them in celebration of the fall harvest. The Indians traveled for several days, created their own camp, and stayed with the Pilgrims for three days of feasting and celebration. This first Thanksgiving sounds similar to our tradition of family members invading a relative's home and staying there for days on end.

The holiday received official status in 1789, with Washington's first presidential proclamation, which designated the 26th day of November next to be set aside for Thanksgiving. "It is the duty of all nations to acknowledge the providence of Almighty God and to obey His will, to be grateful for His benefits, and humbly to implore his protection and favor," he wrote.

For decades afterward, states set aside different dates to celebrate Thanksgiving. It took the persistent efforts of Sarah Josepha Hale to get the nation as a whole to observe a single day as Thanksgiving.

Hale was born in New Hampshire in 1788. Her brother, Horatio, helped her receive an education. Each time he returned to the family's home from Dartmouth College, where he was a student, he taught her what he had learned there. After he received his diploma, he presented it to Sarah in recognition of her accomplishment.

At 18, Sarah founded a private school and taught there for seven years until she met and married David Hale. While married, she wrote short stories and articles that were published in newspapers.

After Hale's sudden death when Sarah was in her late 30s and her subsequent failed attempt at making and selling women's hats, Sarah published a book that attracted the attention of the Rev. John Blake, owner of a new women's magazine. He hired her as editor. Hale went on to write poetry and fiction, including the nursery rhyme "Mary Had a Little Lamb."

But perhaps her greatest effort was her nearly 40-year campaign for the establishment of an official day of thanks to be celebrated throughout the country. She lobbied five presidents and wrote numerous newspaper editorials in support of a day of Thanksgiving.

In 1863, President Abraham Lincoln declared a day of Thanksgiving after the Union victories at Vicksburg and Gettysburg. After receiving a letter from Hale urging him to set aside a permanent, single day for celebration of the holiday, Lincoln proclaimed the last Thursday in November as a day of Thanksgiving.

Lincoln's proclamation, made during the Civil War, acknowledged "The gracious gifts of the Most High God" and noted that it "seemed to me fit and proper that they should be solemnly, reverently and gratefully acknowledged as with one heart and one voice by the whole American People." Lincoln invited his fellow citizens to observe "a day of Thanksgiving and Praise to our beneficent Father who dwelleth in the Heavens."

Thanksgiving has been celebrated as a national holiday since Lincoln's proclamation. While this established a single day of thanks for our nation, the date continued to change every year.

In 1939, in an effort to lengthen the Christmas selling season, President Franklin Roosevelt moved Thanksgiving up a week -- to the next-to-last Thursday of November. This created much confusion regarding which Thursday was the correct day for Thanksgiving. In 1941, President Roosevelt signed legislation making Thanksgiving the 4th Thursday in November.

Thanksgiving is a family holiday, where the emphasis is on fellowship and time spent together rather than gifts, glitz or fancy parties. The holiday's one constant is a big meal shared by family and friends. While this might appear to be simplistic and unimportant to some, studies have proven there is great value in family gatherings for meals.

That same positive impact of coming together to break bread and share time may hold true for the nation, too. Doing so may help families overcome miscommunication, misunderstanding and misinterpretation. If so, let us gather together, be thankful and, as Lincoln wrote in his proclamation, "fervently implore the interposition of the Almighty Hand to heal the wounds of the nation and to restore it as soon as may be consistent with the Divine purposes to the full enjoyment of peace, harmony, tranquility and Union."

Russian Government Reportedly Attempting to Install Pro-Russian Leader in Ukraine
Rebecca Downs
This Sloppy Pro-Biden 'Brandon' Ad is So Bad, It's Hard to Tell Who It's Supporting
Rebecca Downs
Virginia Woman Charged After Threatening to Show Up to Child's School with Guns in Protest of Mask Mandate
Landon Mion
While Thousands Were Marching for Life, Here's What Democrats Have In Mind
Rebecca Downs
Kyrsten Sinema Censured By Arizona Democratic Party Over Opposition to Nixing Filibuster
Landon Mion
‘What Is a Woman?’: Matt Walsh Appears on ‘Dr. Phil,’ Presses ‘Non-Binary’ Individuals on Gender
Landon Mion

This Sloppy Pro-Biden 'Brandon' Ad is So Bad, It's Hard to Tell Who It's Supporting
Townhall
Hot take: The 'CRT' conspiracy theory is rebranded Nazi-style anti-Semitism wealthy donors use to weaponize history
Twitchy
Psaki Slips up on Who Is in Charge at the WH
Redstate
Is Putin Bluffing in Ukraine?
PJ Media