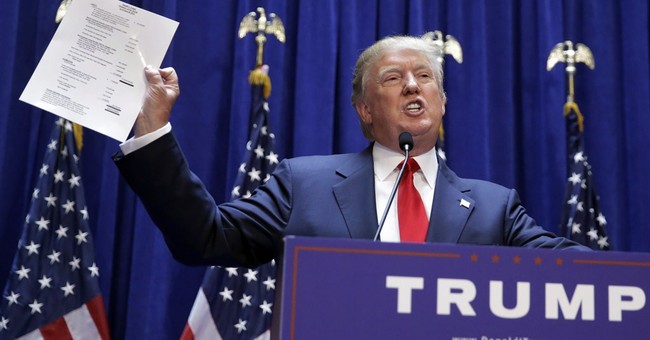 It's official. On Tuesday, Donald Trump announced that he is officially running for president of the United States. "And we are going to make our country great again," he added. While I agree with his goal -- making America great again -- it will be interesting to see if his running for the nomination takes us along this path.

Trump's announcement this week that he is running for president has turned the Republican primary process into a celebrity apprentice event. While there might be more than one person out there that thinks we have had enough Bushes in the White House, there is a big difference between former Gov. Jeb Bush announcing he is running for president (which he did this past Monday) and Trump announcing that he is going for the job.

Bush is the former governor of Florida, and Trump is a celebrity TV star and a successful businessman. One has led one of the largest states in the nation; the other has rebounded from business challenges to make billions off creating a recognizable brand -- while promoting himself.

The first thing to keep in mind is that Trump is not only very successful but he is also very, very good at what he does. What is it, you might ask, that the real estate mogul/ reality TV celebrity does? Being Donald Trump is what he does, and it's a full-time job. No matter where he is, he has to be Donald Trump. Sure, certain, full of himself. It can't be easy to be Donald Trump.

Everywhere you go, they recognize you, ask for your picture or possibly take pictures of you without asking while you are looking across the street, eating a meal or just staring into space. If you're outside in public view, then you're on the runway and have to assume that you are being watched by reporters who are ready to turn a car door that won't easily close into a car door that you slammed out of emotion. You have to assume that anyone you walk by is taking -- or could be taking -- your picture. While you're taking family photographs on vacation, dozens of others are taking photos of your family on vacation.

It's exhausting, unless, of course, you love the attention, in which case it's exhilarating and addictive. Whether it's liked or not is beside the point. The point is that the pressure to perform, to be seen and recorded, whether by reporter or photographer, is there at every second of every minute. People watch your every move, parse your every word, follow your every step.

In some ways, Trump might be more ready to run for president that any other candidate. He's used to the press reporting on his personality and probably does not care what the press says about him. Trump understands that the media is a conduit to the public and that it is the public is who is the consumer of whatever he is selling, whether is it real estate, reality television shows or his political campaign. The media is a tool to be used to his advantage.

His experience might in fact have prepared him for running the gauntlet of the national presidential press corps, where everywhere you go, you are photographed; whatever you say, you are recorded -- as if your appearance and words made a difference in the world. Trump is used to the first, if not the second.

It will be interesting to see if there are any specific policy initiatives deep enough and articulated in a compelling fashion enough by Trump to make a difference in shaping the republican primary process. If so, then his candidacy could in fact take us along the path to greatness as a nation. If not, then in the end, the announcement that Trump is running for president will once again be all about him.