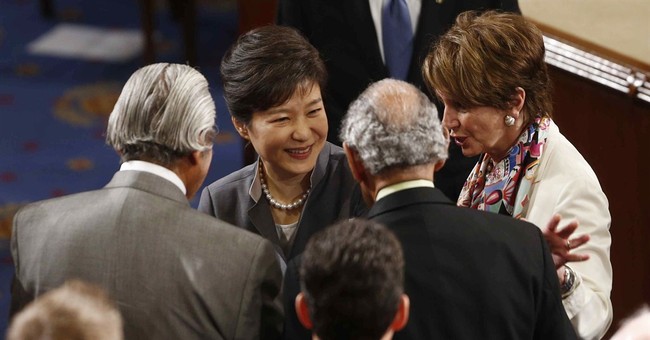 Currently 20 of the 100 U.S. senators are women, as are 78 of the 435 representatives, for a grand total of 18 percent of congressional seats. In contrast, according to exit polls, women made up 53 percent of the voters in the 2012 presidential election. President Obama won women by 10 points.
This might lead you to wonder: Why aren't more women running for and winning elected office? There are four times as many men in Congress as there are women. In other words, those who are being elected do not represent those who are voting, at least from a gender perspective.
While their numbers are smaller, their interactions differ from those of their male counterparts. One such difference has been orchestrated by Sen. Barbara Mikulski, D-Md.
"Off hours, the Senate women have a bipartisan dinner together once a month, a ritual organized by Ms. Mikulski, which they say creates personal bonds and helps them work together on policy," wrote Jennifer Steinhauser of The New York Times in an article titled, "Women Make New Gains in the Senate."
"The dinners 'are the only reason I've been successful,' Ms. (Kirsten) Gillibrand (D-N.Y.) said, recounting how Senator Lisa Murkowski, Republican of Alaska, helped her write the bill that provided health care to the first responders to the attacks of Sept. 11, 2001. 'In the Senate you have to start with a bipartisan core to get things done, and that core is often formed with the women,' Ms. Gillibrand said."
It's not just that women provide role models for the next generation, it's also that they focus more on consensus-building over fierce partisan activity, according to an April 2013 article in the American Journal of Political Science by Craig Volden, Alan Wiseman and Dana Wittmer, "When Are Women More Effective Lawmakers Than Men?"
"Previous scholarship has demonstrated that female lawmakers differ from their male counterparts by engaging more fully in consensus-building activities," they concluded. "We argue that this behavioral difference does not serve women equally well in all institutional settings. Contentious and partisan activities of male lawmakers may help them outperform women when in a polarized majority party. However, in the minority party, while men may choose to obstruct and delay, women continue to strive to build coalitions and bring about new policies. ... The opposite is true for majority party women, however, who counterbalance this lack of later success by introducing more legislation. Moreover, while the legislative style of minority party women has served them well consistently across the past four decades, majority party women have become less effective as Congress has become more polarized."
So if women are consensus-builders and are able to be effective while serving in a minority party, why aren't more elected?
The answer may be found in a May 2013 paper from the American University School of Public Affairs titled "Girls Just Wanna Not Run: The Gender Gap in Young Americans' Political Ambition." The authors conclude that there are five key areas of variation that explain why men are more likely than women to run for office:
"Young men are more likely than young women to be socialized by their parents to think about politics as a career path. ... Young women tend to be exposed to less political information and discussion than do young men. Young men are more likely than young women to have played organized sports and care about winning. Young women are less likely than young men to receive encouragement to run for office -- from anyone. Young women are less likely than young men to think they will be qualified to run for office, even once they are established in their careers."
While both male and female respondents in the survey said that they want to improve the world, they differed in how to do so. "Female respondents were 50 percent more likely than male respondents to say that working for a charity is the best way to bring about change. Men, on the other hand, were nearly twice as likely as women to see running for elective office as the best way to bring about change."
Possibly it's the apparent dysfunction in Washington that is off-putting to women. Why run for an office where there appears to be little progress made by those elected? But possibly, if more women were in office, Washington might prove to be a bit less dysfunctional, as they focus on consensus and action.