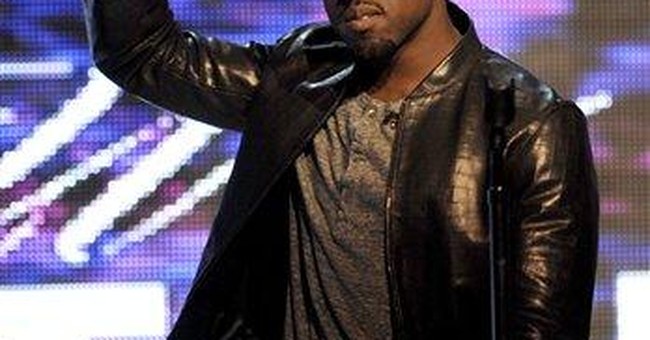 Obama was referring to West's actions during the MTV Video Music Awards Sunday when he jumped on stage, interrupted country singer Taylor Swift's acceptance speech and proclaimed that Beyonce had the best video. West apologized publicly on Jay Leno the next day and directly to Swift on Tuesday.

Hold on -- there has been no speculation that Obama's comment was due to racism or possible dislike of rap music. But the inflammatory question provides us the opportunity to have a frank conversation about racism and prejudice.

Prejudice is a preconceived judgment or opinion. Racism occurs when the prejudgment is due to a person's race.

People are constantly trying to explain the world around them in a cause- and-effect manner. It provides a prescription for dealing with activity and outcome and allows for predictable living. What made it happen? Was there an underlying reason?

Everyone has prejudices, or preconceived opinions.

Race and sex are traits that are often used in prejudging. Other prejudices can be based on country of origin, religion, college attended or work experience. The list goes on and on.

Most of us have experienced some form of prejudice. Some of my experiences include prejudice regarding my rural upbringing, work experience, sex and age.

Race is different. We all carry around the mark of our ancestors in terms of the color of our skin. As Mary Norwood, the lone white candidate for Atlanta mayor, noted in response to a question regarding her race, "This is the package I got." We have no choice in our race.

After his "You Lie" outburst during Obama's health care speech last Wednesday, Rep. Joe Wilson, R-S.C., called the White House and apologized for his "inappropriate and regrettable comments." Not appeased, his colleagues publicly reprimanded him Tuesday.

Saturday night at the U.S. Open, Serena Williams exploded after a Japanese line judge called her for a foot fault while the tennis star was trailing near the end of the second set. "If I could, I would take this ... ball and shove it down your ... throat," Williams screamed at the woman. This tirade resulted in a penalty point leading to Williams' loss of the U.S. Open title.

She publicly apologized the next day.

I have heard no speculation that the cause of her outburst was the race or gender of the line judge.

Nor have I heard any speculation that West's outburst was due to his possible deep-seated dislike of country music or blonde women.

Why pull together these episodes of September savagery where decorous speeches, matches and awards ceremonies have given way to spectacles of outbursts, lost tempers and uncivil behavior?

Early in my career I moved from finance to marketing. Several marketing employees were convinced that the move of a finance person into marketing would ruin the marketing department.

Soon after the move, there was pushback regarding my approach to negotiating with vendors. Was this due to prejudice against finance people, or a serious question regarding policy implementation? Assuming the latter, we worked together to create a consistent policy. Was prejudice against finance people moving into marketing still evident? Certainly. But by addressing the substantive questions regarding policy, the prejudice dissipated.

To answer my own question, I do not believe that Obama's comment regarding West was prejudiced. But it provided us the opportunity to rethink prejudice. While we cannot condone prejudice, we cannot afford to believe that prejudice is lurking behind every comment, prejudging that it will surface. Instead, we must focus our energy and efforts on substantive policy issues.

Might some portion of the pushback regarding Obama's performance be due to underlying racial prejudices? Certainly.

Would an approach to solve substantive questions regarding policy without regard to outlying prejudged beliefs go a long way toward dissipating any remaining prejudices? Probably.

Is it fair to label all opposition to Obama as racist? Certainly not -- and possibly prejudiced.