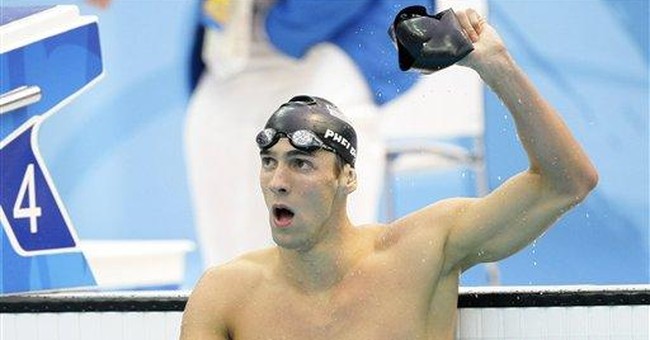 I was reminded today, while having lunch with a friend, that there is one thing that everyone shares - time. While some of us have more money than time and some have more time than money, we all have the same amount of time - 24 hours per day. It is up to each of us to determine how to spend our time. Will we make our time worthwhile or simply while away the hours?

Her point was not that every minute had to be fun or enjoyable – just worth our time.

Two very different people have become very successful, in very different areas, by making the most of the time they have. At first glance, they might appear to have few commonalities: Neil Diamond and Built to Swim,” provides background for Phelps’ career. He began swimming at age 7, following his two older sisters, and began practicing with elite swimmers just four years later. Sokolove’s article notes that while studies were hard for Phelps when he was young that, “the water was his therapy.”

Often noted as appearing more at home in the water than on land - he was created to swim, according to his Coach Bob Bowman, and swim he does - up to five hours a day.

Eddie Reese, head coach for the USA's 1992, 2004 and 2008 men’s Olympic swim teams, said in 2004 that Phelps was not only the most talented swimmer he had seen, but “also the hardest-working. It's a rare phenomenon. You never see it."

According to Sokolove, Bowman passed along his philosophy to the swimmer: “There is no substitute for being in the water. Not running or weight lifting, and certainly not resting. Each day out of the water is a setback.”

Phelps understands that, to reach his goals (which he has posted next to his alarm clock so he will see them every day), he has to make every day worth his while. He, like Bowman, views days out of the water as lost time

Another man at the top of his game is Neil Diamond (67), who has grossed $168 million over his last three tours. I attended one of his recent concerts and, man, does he give a performance! While it was fun to sing along to “Sweet Caroline” and “America,” it was his ability to connect with his audience and get them involved in the show that most impressed me. While my group included people from 40 to 60 years of age, we were all up singing and dancing while Diamond performed (with the exception of that one person who was too cool). According to Ben Sisario’s August 12, 2008 New York Times article, “The Marathon Man of Pop,” Diamond is a hardworking performer, “devoted to steady routines.” They include lugging around a grocery bag stuffed with notes for new songs, eating only meals FedExed to him from his dietary consultant, and warming up his band “with light calisthenics and a group whoop.”

Diamond is quoted in Sisario’s article, “I want to know what marathon runners do, because I do the same thing. I run a two-hour marathon every time onstage. So I have my electrolytes kept at a certain level, and I do my carb-loading after the shows for the next night.” This is a man who takes his preparation and daily routine as important and key in making sure he is ready to perform for his audience.

“This is my job,” Diamond continued in the article. “Someone much greater than me gave me that job. He said, ‘You, you with that stupid look on your face — go out and sing until I tell you to stop.’ I haven’t heard the word yet so I’m just going to keep doing it.”

So, while Phelps swims for five hours a day, and 67-year-old Diamond treats life like a marathon, – each pursuing the path for which they believe they were created, what should the rest of us -- mere mortals -- do?

Here’s the answer: Begin living the lives we were created for. As Walt Disney said, “The way to get started is to quit talking and begin doing.”

Make sure that every minute of your life is worth your while.

Rebecca Downs
Chilling Changes Are Coming Out of the Biden Administration's HHS Redefining Sex
Rebecca Downs
The FBI Finally Admitted What We All Knew About the 2017 Attack on the GOP Congressional Baseball Team
Matt Vespa
Does Biden Hate the Police? You Have to Wonder with His Updated Proclamation
Rebecca Downs