The Enemy Is Watching

Jack Carr
|
Posted: Mar 23, 2020 12:01 AM
Share   Tweet
The opinions expressed by columnists are their own and do not necessarily represent the views of Townhall.com. 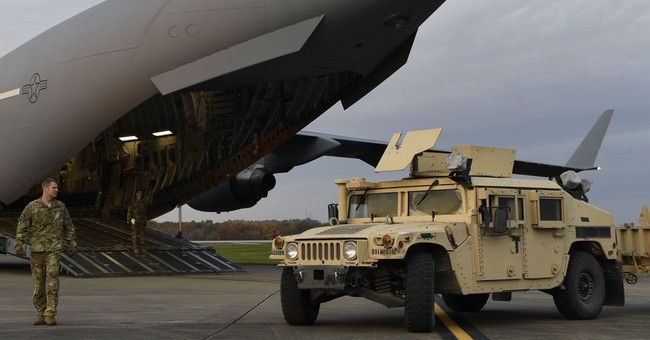 As COVID-19 continues to spread, we are learning and adapting as a society; so is our enemy.  Both state and non-state actors have watched as the United States became bogged down in conflicts our technologically superior military was ill-equipped to handle.  The barefoot insurgent with an AK has proven determinedly resilient against a multi-trillion-dollar war machine consisting of gear and equipment designed to fight a different enemy in a different type of war.  Abrams tanks, Bradley Fighting Vehicles, Strykers, Little Birds, Chinooks, and a fleet of fighters and bombers developed around a post-World War II Soviet threat have been unable to effectively counter an enemy using the populace as camouflage and relying on fifty-dollar IEDs to defeat armored vehicles costing millions.  A protracted war of attrition against an enemy defending home soil does not favor the side wearing all the watches.  In fighting an expeditionary counterinsurgency force, the enemy knows how to run down political and public support by sending a steady stream of bodies home in flag-draped caskets.

As effective as the enemy has been over the past two decades in Iraq and Afghanistan, a microscopic virus originating in a live animal “wet market” half a world away has proven even more successful at spreading fear on home soil, decimating markets and threatening to destabilize the country to point not seen in a generation.  Much as our enemies have taken notes on our failures in the broader Middle East and Southcentral Asia, they are studying the impact of COVID-19 and evaluating how best to exploit our weaknesses in the future.   Even more efficient than the insurgent who moves amongst a civilian population is an invisible threat that infects and kills without giving its opponent an opportunity to target it with kinetic weapons.

The weaponization of infectious diseases is nothing new.  Fredrick I poisoned Italian wells with dead bodies in 1155.  In a more well-known tactic, the Mongols used catapults to launch bodies infected with plague into the fortified city of Caffa.   The Spanish sold wine mixed with the blood of those infected with leprosy to the French in the 1400s.  The British, French, and Germans experimented with and used various bioweapons in the 1600s and 1700s.  In the lead up to, and during, the Second World War, the Japanese took the lead in bioweapons research, testing different strains on prisoners while employing them in wide-scale attacks against the Chinese.  With history as our teacher, we know they will be used again.

When I first heard of the Wuhan coronavirus this past December, I was already deep into my research on bioweapons for my fourth novel.  My reading was focused on a particular strain of the Marburg Hemorrhagic Fever (classified as a Category A bio-warfare agent by the Centers for Disease Control) called Marburg Variant U.  The first outbreak was sited in Marburg, Germany in 1967, the result of exposure to African green monkeys imported for polio research and testing purposes.  It wasn’t until after the collapse of the Soviet Union, when a Russian scientist immigrated to the United States, that the intelligence community learned the full scope of the Soviet bioweapons program, specifically Marburg Variant U.  In the waning days of the Cold War, Dr. Nikolai Ustinov inadvertently pricked himself with a needle contaminated with Marburg.  Placed in quarantine his body slowly liquified from the inside out.  During his excruciating demise, he took detailed notes in a journal that was later recovered and studied.  Blood was extracted from Dr. Ustinov’s body for research. This variant of Marburg, now called the U Variant after Dr. Ustinov, was studied and weaponized.  Its transmission could be aerosolized and spread via fine dust particles.  It remains one of the most potent bioweapons ever developed.

With the collapse of the Soviet Union, did Marburg Variant U find its way out of the bioweapon facilities? Did information and research from the classified Soviet programs proliferate as researchers looked for work? Those answers are known only to the those who worked the programs and the intelligence community and CIA case officers who may have recruited them.

Our adversaries continually study us and adapt.  They have seen our system disrupted by COVID-19.  Are they making plans to one day unleash an invisible weapon against us from within?  Perhaps one released through proxies?  Or are non-state actors that organize in a virtual space formulating a strategy that includes targeting our urban and financial centers with a bioweapon incubated and weaponized within our own borders?  If you were the enemy, what would you do?

Jack Carr is an author and former Navy SEAL Sniper.  He is the author of The Terminal List, True Believer, and Savage Son. Visit him at OfficialJackCarr.com and connect with him on Instagram, Twitter, and Facebook at @JackCarrUSA.

Spencer Brown
Are We Shocked That This Happened to Liz Cheney?
Matt Vespa
The Marine Who Called for Afghanistan Accountability Has Been Thrown in Prison
Katie Pavlich
Border Patrol Union President Says He Would Arrest Biden for His Disastrous Handling of the Border
Julio Rosas