Ivan Sascha Sheehan
|
Posted: Nov 12, 2020 11:33 AM
Share   Tweet
The opinions expressed by columnists are their own and do not necessarily represent the views of Townhall.com. 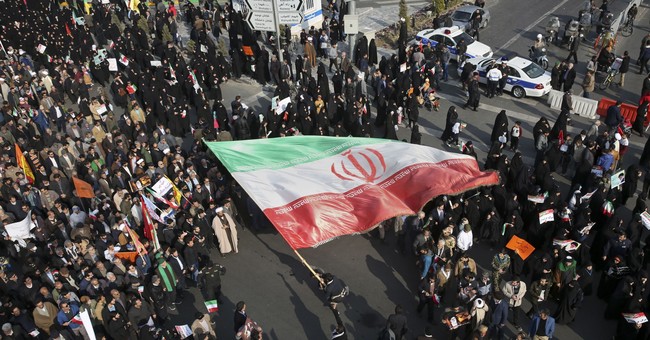 Though the prospect of legal challenges looms large, the outcome of the U.S. presidential election appears to favor Joe Biden being sworn in as the 46th President of the United States on January 20, 2021.

Faced with the daunting task of managing the U.S. response to a raging global pandemic, Biden must also prepare for a series of security challenges that await him in less than 70 days.

But no country poses a more significant global danger than the world’s leading state sponsor of terrorism– the Islamic Republic of Iran. Neither is it possible to ignore the regime’s deplorable human rights record any longer.

Though Iran’s leaders are reportedly heralding President Trump’s defeat at the hands of a fiercely polarized electorate as an anticipatory sign that the U.S.-led “maximum pressure” campaign will conclude with Trump’s departure, Tehran’s celebrations are premature at best.

There is bipartisan recognition in the U.S. Congress that the consistent pressure resulting from the application of global sanctions coupled with demonstrations of support for the Iranian people not only crippled the Iranian economy, it emboldened the regime’s pro-democracy forces.

And though the regime’s clerical rulers have yet to be toppled, the ayatollahs are as vulnerable as they have ever been.

President Hassan Rouhani’s declaration this week that the next occupant of the White House should take responsibility for correcting the “false approach toward Iran over the past three years” is wishful thinking. The hotly contested 2020 U.S. presidential election notwithstanding, the Islamic Republic’s leaders are unwise to interpret America’s ongoing democratic transition as a referendum on Iran policy. Few in Washington believe the clerical regime adequately reflects the will of the Iranian people and no options, as yet, have been taken off the table.

This week marks the first anniversary of the November 2019 uprising that shook Iran to its core. The countrywide discontent that spilled into Iranian streets a year ago belied Tehran’s well cultivated illusion of strength and stability. The unrest also reinforced a fundamental lesson for U.S. officials: Iran’s theocracy has little faith in its own people. The truth is, it fears them.

Instability first began to emerge in cities and towns across Iran in the final days of 2017. The protests initially gave voice to economic grievances but ultimately became an outlet for condemnation of the ruling system in its entirety.

By the middle of January 2018, demonstrations had metastasized to more than 100 localities, unified into a single uprising by shared slogans such as “death to the dictator,” a sign of the people's thirst for regime change. Supreme Leader Ali Khamenei delivered a speech at the height of the demonstrations acknowledging the organizational role of the country’s principal opposition group, the People’s Mojahedin Organization of Iran (PMOI/MEK).

The November 2019 uprising, which was far more serious than either the 2009 demonstrations or the countrywide revolt of 2018, resulted in some of the regime’s worst repression. The Islamic Revolutionary Guard Corps fired upon crowds with live ammunition in dozens of cities, killing approximately 1,500 peaceful demonstrators.

Nevertheless, by January 2020, courageous Iranians were again taking to the streets in massive numbers and mobilization on university campuses had reached a fever pitch. With crowds of protestors calling for regime change, many hewing closely to the MEK’s democratic platform, it was clear the opposition movement was giving voice to the Iranian people’s frustrations.

The role of the organized Resistance was again acknowledged by Khamenei, this time in a speech to student members of the civilian militia known as the Basij at the start of the current Iranian calendar year. In the Iranian New Year speech, the supreme leader called upon them to be on guard against the growth of MEK/PMOI influence on university campuses, and to help deflect the group’s message so that the international community would not recognize student protests as being motivated by rejection of the regime as a whole.

For the better part of four decades, U.S. officials have treated the regime in Tehran as a fixture of the Middle East landscape by overestimating the regime’s leaders and insufficiently leveraging internal cleavages to advance the cause of liberty in Iran. The Iranian people – long the worst victims of the mullah’s political violence – have been ignored.

Tehran’s lobbyists in Washington are hopeful that incoming Biden administration officials will ease financial sanctions in exchange for nuclear commitments and abandon Washington's post-2016 offensive posture by falling back on Obama era policies that resulted in the deeply flawed nuclear accord.

Transition periods between presidential administrations are a brief window during which incoming officials can take stock of geopolitical challenges and national security threats.

With a democratic transfer of power underway in Washington, Biden has an opportunity to quench the Iranian people’s thirst for their own democratic transition in Tehran.

If the election results are certified in Biden's favor, the new commander in chief can begin by observing the regime’s most conspicuous vulnerability: its own restive citizenry yearning for change and the pro-democracy activists mobilized to bring it about.

Prof. Ivan Sascha Sheehan is the Executive Director of the School of Public and International Affairs at the University of Baltimore. Opinions expressed are his own. Follow him on Twitter @ProfSheehan.