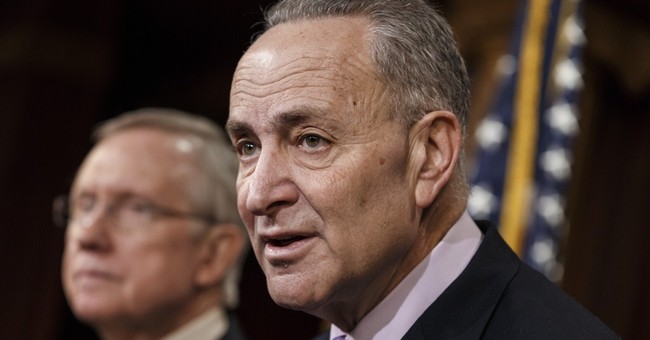 It is no secret that John Boehner (R-Ohio) and the House Republican leadership want to cut an immigration deal that includes amnesty for illegal aliens. It’s right there in the “Standards for Immigration Reform” they unveiled in late January.

It is also no secret that Boehner and company only reluctantly decided against moving forward with immigration legislation this year because of resistance from the Republican caucus and a lot of blowback from their political base. Conveniently, President Obama’s refusal to enforce most existing immigration laws, coupled with his claim of executive authority to unilaterally grant amnesty to broad categories of illegal aliens, provided the GOP leadership a face-saving way to retreat from their “principles” just a week after making them public.

“There’s widespread doubt about whether this administration can be trusted to enforce our laws,” Boehner said on Feb. 6, as he declared that the House was unlikely to act on immigration in 2014. Even Marco Rubio (R-Fla.), a member of the Senate Gang of Eight, has warned the House against trusting the president to implement any immigration enforcement legislation in good faith. The administration “will just do the legalization part but they won't do the enforcement part,” Rubio stated.

Boehner and Rubio are correct, of course. The president has demonstrated that he will not enforce immigration laws he doesn’t like, and there is less reason for him to even make a pretense of enforcement once he has achieved his political goal of amnesty for illegal aliens.

Schumer told House Republicans that if they want to use the president as an excuse not to pass their own amnesty bill, he would be open to taking the president out of the equation. “Let’s enact the law this year, but simply not let it actually start ‘til 2017, after President Obama’s term is over,” Schumer said on NBC’s Meet the Press on Feb. 9. It is a typically shrewd political maneuver by Schumer who recognized that Republicans were painting themselves into a corner by citing the president, not bad policy, as their reason for not acting on immigration in 2014.

However, Schumer’s seeming offer of political cover for Republicans is actually an ironclad guarantee that immigration laws will not be enforced for the next three years, plus the strong likelihood that the amnesty will be even bigger than one that would go into effect immediately. Just consider: If President Obama is refusing to enforce most immigration laws now, there is virtually no chance that he will enforce laws against people who are just marking time until 2017, when their amnesty kicks in. Illegal alien advocacy groups are vociferously demanding that the administration halt most deportations based on the mere possibility that Congress will grant amnesty. Such demands would only be amplified by the reality that Congress has already granted amnesty beginning in 2017.

Even if the three-year delay did not come with formal work authorization, it would certainly come with a de facto green light to work in the U.S. Congress cannot very well pass legislation essentially telling illegal aliens to hangout while President Obama serves out the rest of his term, and expect that the president will prevent them from working while they wait.

Nobody really knows for sure how many illegal aliens are here right now, but one thing is for certain: If Republicans accept Schumer’s offer the number will be much bigger in 2017. The plan essentially gives people all around the world three years to get here and acquire some doctored pay stubs or rent receipts to demonstrate that they were here before whatever cut-off date Congress writes into the final bill.

The GOP leadership’s response to Schumer should be obvious: Talk to us in 2017. Three years is an eternity and there is no reason for Congress in 2014 to set in stone an amnesty and massive increases in immigration that may make even less sense (if that is possible) three years from now. In the meantime, the current Congress should concentrate on getting President Obama to put down his pen and his phone and start enforcing the laws that have already been passed.