Ilana Mercer
|
Posted: Feb 01, 2017 10:36 AM
Share   Tweet
The opinions expressed by columnists are their own and do not necessarily represent the views of Townhall.com. 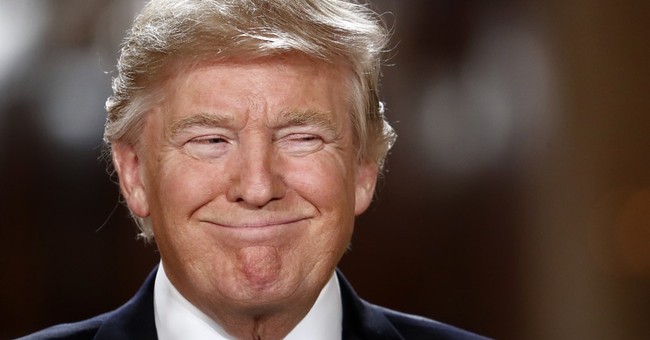 Donald Trump is the gift that keeps giving. The week is still in its infancy, but the president has already made Chucky Schumer cry, fired acting Attorney General Sally Yates within hours of her acting up, and caused the Forgotten Man to go even harder for their president. This Trump accomplished by inadvertently exposing the Democrats as firmly in the camp of Hollywood harridans, tech execs, the immigration lawyers lobby, the global refugee industry; and in the grip of the international human rights octopus.

The Democratic constituency can no longer hide. It's as though all these ghastly people are wearing the p-ssy Dunce-Caps adorned by the Madonna and Ashley Judd protesters.

The first moment of joy came when, flanked by Muslim women, the sanctimonious Schumer, a politician to his fingertips, choked up because of President Trump's executive order to "temporarily halt the U.S. refugee program and ban entries from seven Muslim-majority nations for 90 days." The president campaigned on this promise, was elected based upon it, and is now fulfilling it, a novel concept to a shyster like Schumer.

Then, before Sally Yates could use her perch, as a public servant at DOJ, to crusade for a centralized value system—the POTUS fired her, promptly ending Yates' two-hour insurrection at the Department of Justice.

And I thought the DOJ was charged with implementing the laws of the land, in accordance with its mission statement. To wit, "The Department of Justice is a cabinet-level agency responsible for enforcing the laws of the United States federal government. DOJ ensures public safety against foreign and domestic threats, including terrorism, and preventing crime."

Whether it was borne of insubordination, incompetence or both, Yates' virtue-signaling press conference was about feelings—her own. It was bereft of legal argument. Clearly, this activist was chosen by Obama not for her analytical, legal mind, or her understanding of the plenary power the legislative and the executive branches possess vis-a-vis immigration.

In her mind, the job of the country's top cop is to police our values (or enforce her own).

Not in dispute is professor Alan Dershowitz's analytical acumen. The liberal lawyer called Yates' posturing "holdover heroism. It’s so easy to be a heroine when you’re not appointed by this president and when you’re on the other side,” he admonished, deriding Yates for resorting to political posturing, while failing to offer a nuanced legal analysis of the "Executive Order [to Protect] The Nation From Foreign Terrorist Entry Into The United States."

He had been gone for only eight, jam-packed days, but Barack Obama's reappearance was likewise blissfully brief. The cable girls were destined to be disappointed. Again. After releasing a short, woolly statement to say how "heartened" he was "by the level of engagement taking place in communities around the country," Obama retreated, neutralized, too, by President Trump's decisive actions.

When a politician pules about "the values that make our country great," to quote Mrs. Clinton, chances are they mean multiculturalism, pluralism, open-borders, Islam as peace, communities divided in diversity as a net positive, and the Constitution—it mandates all the above, ask Ruth Bader Ginsburg—as a living, breathing, mutating philosophical malignancy.

For them, "protecting" the abstraction that is "our way of life" trumps the protection of real individual lives. "We must guard against a weakening of the values that make us who we are," dissembled Obama in the waning weeks before he was gone. The empty phrase is meant to make the sovereign citizen forget that government's most important role, if not its only role, is to protect individual life. This is something President Trump grasps on a gut level.

In his last few addresses, Obama promised to speak up on "certain issues," in times when he imagined "our core values may be at stake." Likewise, in delivering her Control-Alt-Delete speech against the Deplorables, Clinton had asserted that "our country is great because we're good. Donald Trump disregards the values that make our country great.” The two’s group-think notwithstanding, only individuals can be virtuous, not collectives.

To manipulate Americans, politicians Before Trump have used the values cudgel. With respect to immigration, the idea is to impress upon gullible Americans that the world has a global Right of Return to the U.S. Fail to accept egalitarian immigration for all into America; and you are flouting the very essence of Americanism. (Or, to use liberal argumentation, you’re Hitler.)

Self government, and not imposed government, implies society, not The State, is to develop value systems. The State's role is to protect citizens as they go about their business peacefully, living in accordance with their peaceful values.

When you hear an appeal to “permanent values”—"the values that make our country great," to quote Clinton—know you are dealing with world-class crooks. They want to swindle you out of the freedom to think and believe as you wish. For in the classical conservative and libertarian traditions, values are private things, to be left to civil society—the individual, family and church—to practice and police.

The American government is charged purely with upholding the law, no more. Why so? Because government has police and military powers with which to enforce its "values." A free people dare not entrust such an omnipotent entity with enforcing values, at home or abroad, because values enforced are dogma.

When incontestable majorities call on government to curb Islamic and other in-migration because this imperils American lives, President Trump's unswerving opponents—the Obama, Clinton, Ryan, McCain, Graham, Schumer, and media mafia—will invariably intone, "That's not who we are."

When you hear that manipulative mantra, tell them to shut up, mind their own business, and stick to their constitutional mandate to protect the people, not police their minds.

Remember that through an appeal to values, the State aggrandizes itself.

A limited government, serving an ostensibly free people, must never enforce values. Because our form of government is incompatible with enforcing values, the American People can't and mustn't welcome into their midst civilizations whose values are inimical to the survival of their own.