Disenfranchisement Of Poor Whites Under Hillary

Ilana Mercer
|
Posted: Oct 22, 2016 12:01 AM
Share   Tweet
The opinions expressed by columnists are their own and do not necessarily represent the views of Townhall.com. 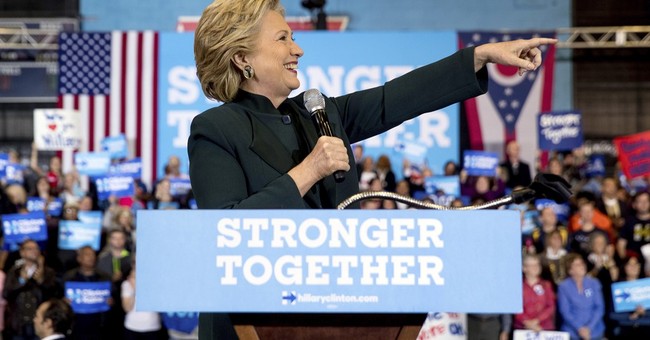 “Strengthening families” is big in Hillary Clinton’s immigration platform—not American families, but families of undocumented Democrats. To that end—and “within her first 100 days in office”—Hillary has vowed to “introduce comprehensive immigration reform with a pathway to full and equal citizenship.” These newly minted Democrats will be speedily naturalized (likely in time for Hillary’s second term). “All families” will be granted “affordable health care,” a privilege very many Americans are without.

Yet another political grant of privilege Americans don’t have, unless pigmentally endowed, is affirmative action. The throngs of immigrants and refugees—whose entry into the US Mrs. Clinton will accelerate, and whose numbers she’ll increase, should she become the next president—will benefit from affirmative action.

Although the federal bureaucratic behemoth acts otherwise, the American Constitution “gave the government no license to set quotas for hiring personnel by private enterprise or admitting students to institutions of higher learning,” remarked Richard Pipes in “Property and Freedom: The Story of How Through The Centuries Private Ownership has Promoted Liberty and the Rule of Law” (2000). The institutionalized American quota culture has been imposed by administrative fiat, courtesy of “The Power Elite” and the engorged administrative state under which Americans labor.

For the purposes of conferring affirmative-action privileges, civil servants have compiled over the decades an ever-accreting list of protected groups, “as distinct from whites.” In addition to blacks, the list entails mainly minorities such as Hispanics—Chileans, Puerto Ricans, Cubans, Dominicans, and Mexicans—Pacific Islanders, American Indians, Asian/Indians, Filipinos, Vietnamese and Cambodians.

Affirmative action was ostensibly crafted to correct “the injustices endured by black Americans at the hands of their own government … not only during the period of slavery but also in the Jim Crow era that followed.” The policy took a very different turn, starting in 1965, “when new immigration laws dramatically altered the demographic makeup of the U.S.” In short, the policies of racial redress were extended to all “people of color,” shifting “from remediation toward discrimination, this time against whites.”

It goes without saying that “those who came to this country in recent decades from Asia, Latin America and Africa did not suffer discrimination from our government, and in fact have frequently been the beneficiaries of special government programs,” averred Senator Jim Webb, in a 2010 Wall Street Journal article, titled “Diversity and the Myth of White Privilege.” “The same cannot be said of many hard-working white Americans, including those whose roots in America go back more than 200 years.”

Indeed, much is known about the groups that inherit the earth; much less about the disinherited.

The present ideology on immigration considers all whites, rich or poor, a privileged, “fungible monolith.” This outlook brooks little or no consideration of lives lived in penury for over a century. In particular: It overlooks the descendants of poor white Southern sharecroppers who did not own slaves, but were devastated by the War Between the States both “in human and economic terms.” Even now, this sizeable segment of the South has yet to recover; its attainments with respect to education and income mirror those of the region’s African-Americans, with one distinction: poor whites are barred from affirmative action programs.

First to forewarn about the “immigration-with-preference paradox” was Frederick Lynch, in “Invisible Victims: White Males and the Crisis of Affirmative Action” (1991). The perspicacious sociologist noted that once mass immigration became a bipartisan policy, millions of imported non-black minorities were—and still are—given preference over native-born American citizens. No sooner do these minorities cross the border, legally or illegally, than they become eligible for affirmative action privileges.

At least today we have the benefit of a study that explains, with lots of statistics, the manner in which set-in stone racial set-asides operate to the detriment of poor whites in US academia. It is the work of Princeton sociologists Thomas Espenshade and Alexandria Radford, as reported on in a 2010 column by Patrick Buchanan:

When “[e]lite college admissions officers prattle about ‘diversity,’ what they mean is the African-American contingent on campus should be five to seven percent, with Hispanics about as numerous.” Naturally, “Forty to fifty percent of those categorized as black are Afro-Caribbean or African immigrants, or the children of such immigrants.” Wealthy white kids can still do satisfactorily. Poor whites, on the other hand, come to a great deal of diversity-driven grief. At America’s elite schools, a tacit admissions rule exists among Ivy-League recruiters to advance the advantaged. “Lower-class whites prove to be all-around losers,’ at these schools. They are rarely accepted. Lower-class Hispanics and blacks are eight to ten times more likely to get in with the same scores.”

The “immigration-with-preference paradox,” moreover, has also ensured a constant downward pressure on the meritocratic nature of American institutions. In “State of Emergency: The Third World Invasion and the Conquest of America” (2006), Mr. Buchanan prognosticated that “our two largest minorities, African-American and Hispanics, which now number together seventy-nine million or twenty-seven percent of the population, are leaving school with achievement levels three, four, and five grades behind white and Asian students. [A]s their combined share of the U.S. population…rises toward 40 percent in 2050, they will use their political clout to demand equality of results: racial and ethnic quotas and affirmative action in all profession.”

Again, the affirmative action subterfuge has come about in the teeth of popular opposition and constitutional injunctions against unequal treatment under the law.