Trump’s Not Yet President, But Nieto Is Saying, ‘Si Se Puede’

Ilana Mercer
|
Posted: Sep 02, 2016 12:01 AM
Share   Tweet
The opinions expressed by columnists are their own and do not necessarily represent the views of Townhall.com. 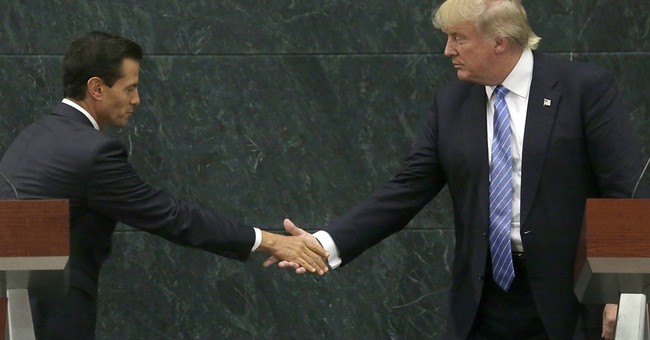 FOLLOWING Donald J. Trump's sublime immigration address, critics—essentially all Big, Crooked Media—charged that Trump's Arizona speech represented a sharp departure from the tone he took earlier that day, with Mexican President Enrique Peña Nieto. A reversal, if you will.

Nonsense. With President Nieto, Donald Trump was at once patriotic, forceful and diplomatic.

In close to two decades of analyzing American politics, I've yet to hear an American leader address his Mexican counterpart as forcefully as Mr. Trump addressed President Nieto. Trump came across as a man-of-the world, to whom interfacing with foreign dignitaries was second nature.

It's always been the case that Americans in power collude with Mexicans in power to bully and manipulate a powerless American People into accepting the unacceptable: The imperative to welcome torrents of unskilled illegal aliens, at an incalculable cost to the safety of America's communities, the solvency of its public institutions, and the sustainability of the environment.

Strolling through the ancient Mayan and Toltec ruins with President Vincente Fox, in 2006, George W. Bush was not talking-up American interests. He was plotting amnesty with an unholy trinity comprised of John McCain, Ted Kennedy and Arlen Specter. Sly Fox was the silent partner.

Most memorably, Bush, who would wrestle a crocodile for a criminal alien, went on to indict and viciously prosecute two brave border-patrol agents, Ignacio Ramos and Jose Compean. For shooting a drug dealer in the derriere—in the process of defending their countrymen—Bush unleashed his bloodhound, U.S. Attorney Johnny Sutton, on the two patrolmen and jailed them.

So what a pleasant surprise it was for this long-time political observer to witness a Mexican president, clearly cowed by The Donald, make no mention of America's bogus obligation to take in Mexico's tired, poor, huddled masses yearning for U.S. welfare.

If President Nieto harbored the urge to make manipulative appeals to American “permanent values,” so as to lighten his political load—there was no evidence of it. It's fair to infer that on that occasion, a show of unparalleled strength and patriotism—Mr. Trump's—extinguished the bad habit. The biblical proverb worked:

Act like a fearless lion before an adversary, and the adversary will retreat.

Naturally, the network nits failed to notice just how reverential and conciliatory Nieto was. He expressed hope that differences would be bridged and that the ideas of freedom and prosperity would form that bridge. Indeed, a surprisingly respectful President Nieto voiced his wish to work constructively with the next president of the United States. There would be challenges to meet and opportunities to realize, but these would be met by the two nations as friends, neighbors and strategic partners.

And lo—again, it swooshed by CNN dimwits—Nieto even stipulated his willingness to review policies that had not worked and allay attendant misunderstandings. Here was an indication Mexico was no longer negotiating from the old manipulative position of strength, facilitated by America's traitor class. For Nieto now faced a different kind of American leader, one who declared he was looking out for the forgotten American masses.

For the first time in a long time we heard how important the U.S. was to Mexico—yes, show us some love—and not only as a willing taker of those hungry, huddled, Mexican masses. While Nieto spoke openly about keeping the hemisphere competitive, he was willing to improve trade agreements to benefit workers of both countries. When President Nieto did cop to some disagreement with the Republican candidate, he nevertheless emphasized a willingness to find common ground.

As for the sui generis Trump: He went straight to the nub of the matter. He loves the United States very much and wants to ensure its people are well-protected. Yet poignantly did Trump acknowledge President Nieto's fellow-feeling toward his people. The Republican standing for president then merged the aspirations of both leaders, by emphasizing their shared quest to keep "the hemisphere" prosperous, safe and free.

At the same time, Trump was uncompromising about NAFTA. He called for reciprocal trade and denied that the trade deal (really "a mercantilist, centrally planned, maze of regulations") had benefited Americans at all.

As if to herald his immigration speech, later that day, Trump then enumerated five shared goals. They are (not in the order presented):

2. Dismantle the drug cartels, jointly, and end their free movement across the Southern border.

3. Improve NAFTA to reflect today's realities, while keeping "our hemisphere" competitive and prosperous, with the aim of improving pay standards and working conditions within.

4. Keep manufacturing capabilities in "our hemisphere." Libertarian will disagree with Trump on this matter, but, as I pointed out in "A Vacation from Reality" (2006), prosperity in one's own country makes the individual less likely to relocate in search of better economic prospects.

Ultimately, as long as the U.S. remains a relatively high-wage area, with a generous, tax-funded welfare system—it will experience migratory pressure from low-wage Mexico. As explained in "The Trump Revolution: The Donald's Creative Destruction Deconstructed" (June, 2016), "migratory pressure flows from low-wage to high-wage regions; from the Third World to the First World."

Alas, "migratory equilibrium will be reached once First World becomes Third World." This Trump seeks to forestall with his most important stipulation:

5. "Having a secure border is a sovereign right. The right of either country to build a physical barrier or wall" to stem the tide of illegal migration, weapons and drugs is incontestable and must be recognized.