The Real Threat to Democracy Is Coming From the Left

Ian Northon
|
Posted: Jan 03, 2021 12:01 AM
Share   Tweet
The opinions expressed by columnists are their own and do not necessarily represent the views of Townhall.com. 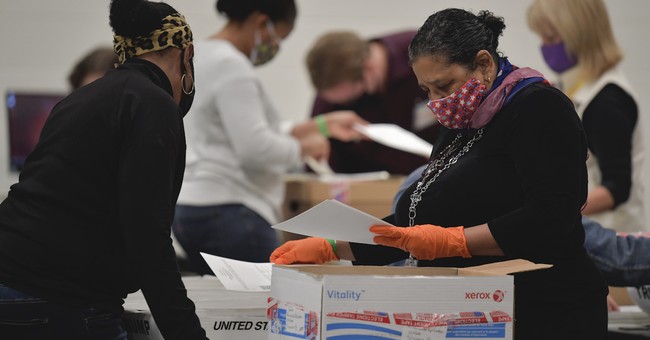 What’s really the bigger threat to democracy: lawyers asking the courts to adjudicate claims of election fraud, or government officials threatening to use police powers to quash dissent?

Considered in those terms, the answer should be obvious. Our entire system of government turns on citizens constantly questioning the actions of government officials, which is exactly what we at The Amistad Project of the Thomas More Society have been doing, alongside many other patriotic citizens who share our concerns about the integrity of our elections.

According to a recent poll, less than half the country is confident that government officials ran the 2020 presidential elections freely and fairly. The only way to restore confidence in our republic is through public litigation — open hearings presided over by competent judges who can then either ensure that the election was fair or verify that irregularities and illegal activities corrupted the results. If something went wrong with the last election, we need to fix it before the next one. If there was nothing seriously amiss, then the people need to see that for themselves.

Unfortunately, many government officials — particularly in the State of Michigan — don’t share that view. Governor Gretchen Whitmer and Attorney General Dana Nessel want us to ignore the widespread irregularities that we witnessed with our own eyes and blindly trust them when they tell us that the recent elections went off without a hitch. The Secretary of State Jocelyn Benson refuses to testify before the state legislature and its oversight committees.

Worse, they’re openly talking about using the power of government to criminally investigate and potentially prosecute those who think the American people deserve more than the self-serving words of partisan politicians.

Whitmer, for instance, deployed 200 state police officers to the Michigan Capitol Building to physically block the door so that Republican legislators and electors could not enter on December 14. At first, she claimed it was over COVID restrictions, but she later declared that it was due to “security threats,” as though allowing the people’s elected representatives — but only those from the opposing party — into the people’s house was a physical danger.

Nessel, meanwhile, suggested that lawyers who challenge the election in court should be disbarred, suggesting that merely questioning statutory violations and highly suspicious circumstances in Michigan and other states constitutes an unjustified attack against the Constitution itself.

We couldn’t disagree more. The Founders established the separation of powers not just to survive dissent, but to thrive on it. The real threat to the Constitution comes from those who claim the authority to suppress — and even punish — opposing viewpoints by virtue of holding a temporary position of power. Government officials derive their authority from the consent of the governed, not the other way around.

The same authoritarian impulses revealed in Michigan are popping up at the national level, too. New Jersey Representative Bill Pascrell recently suggested that House Speaker Nancy Pelosi should refuse to seat 126 Republican representatives simply because they signed on in support of a lawsuit challenging the presidential election results.

That’s the sort of thing happening in banana republics. It’s not supposed to be possible in the United States of America. The truth is, however, that there’s nothing special about this country or our system of government that grants us protections from abuses of power by our elected leaders. So long as we’re run by humans, not angels, we will be tempted to this corruption.

The only lasting protection that “we the people” have against authoritarianism is our collective belief in the rule of law and the limitations it places on those we entrust to run our government.

Dissent is not a threat to the Constitution. The real threat comes from those who wish to criminalize dissent.

Ian Northon is the lead Michigan attorney for the Amistad Project For Election Integrity.

The 2024 GOP Primaries Are Over. The FBI's Raid on Trump's Mar-a-Lago Ended Them.

The 2024 GOP Primaries Are Over. The FBI's Raid on Trump's Mar-a-Lago Ended Them.
Townhall
Andrew Yang catches plenty of heat from lib blue-checks for his take on FBI raiding Trump's home (hopefully he won't back down)
Twitchy
Marc Elias Lets the Cat out of the Bag With What He Tweets About Trump Raid
Redstate
We've Got the Deep State on the Run. Here's What Needs to Happen Next.
PJ Media