Humberto Fontova
|
Posted: Jul 31, 2021 12:01 AM
Share   Tweet
The opinions expressed by columnists are their own and do not necessarily represent the views of Townhall.com. 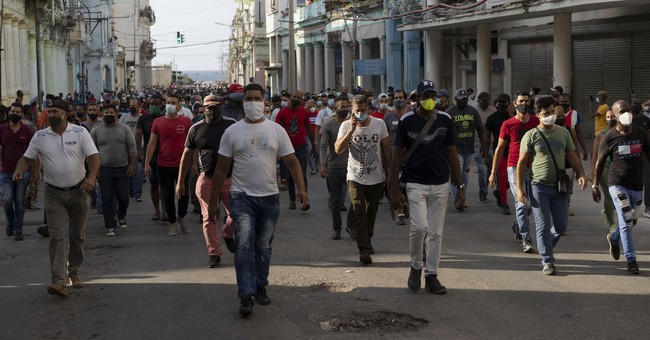 “We, the undersigned, are making this urgent, public appeal to you (President Biden) to reject the cruel policies put into place by the Trump White House that have created so much suffering among the Cuban people.”

The entire fascinating document signed by-- among many other historic lovers of freedom and enemies of cruelty, Jane Fonda, Oliver Stone, Danny Glover, BLM, Daniel Ellsberg alongside many apparatchiks of the Castro regime—can be seen here.

But many of us who follow this issue note a stark divergence between what the Cuban people have been calling for the past couple of weeks and what their self-appointed celebrity benefactors are calling for. To wit:

Cuban people: “Down with communism!” Down with the dictatorship! “Diaz-Canel (Castro’s eunuch hand-puppet) SINGAO!” (Cuban slang for Motherf**ker!)

Jane Fonda: “If you understood what Communism was, you would hope, you would pray on your knees that one day we would become Communist….My biggest regret is I never got to f*** Che Guevara.” (Jane Fonda as quoted by her biographer Patricia Bosworth.)

Oliver Stone: “Fidel Castro is very selfless and moral, one of the world’s wisest men.”

Danny Glover: “My heart beat faster!–one of the most important moments in my life!” (A hyperventilating Danny Glover, while placing flowers on Che Guevara’s tomb on one of his frequent red-carpet trips to Stalinist Cuba.)

Black Lives Matter. “As Fidel ascends to the realm of the ancestors, we summon his guidance, strength, and power as we recommit ourselves to the struggle for universal freedom. Fidel Vive! We are indebted to him for his guidance and inspiration.”

Oh, sure, like all of Castro’s U.S.–based agents (on Castro’s payroll and off), especially like former senator Jeff Flake,  embargo opponents swear up and down that their fanatical efforts against the (so-called) Cuba embargo are, in fact, an immensely shrewd ploy to undermine Castroism by showering the regime with U.S. dollars!

“Hah!” Snort people these embargo opponents with an eye-roll. “How can you right-wing Cuban exiles (people with the most knowledge of and experience with Castroism, who Pres. Trump confided in for his Cuba policy) not comprehend our brilliant plan to end Castroism!”

Well, for starters, Flake, along with all his fellow "shrewd underminers of Cuban Communism by a shower of U.S. dollars," all got and get hero’s treatment in Cuba’s Communist media, limitless visas to visit the Castro’s Communist fiefdom and the red-carpet treatment upon every visit.

Whereas your humble servant is prevented from setting foot in Cuba and denounced as “SCOUNDREL! and TRAITOR!” by the same Communist media which hails Flake and his anti-embargo cohorts as heroes.

I guess those Castros are just too dumb to see through the anti-embargo activists' devilishly shrewd scheme!

Gosh? I guess those Castros qualify as total nincompoops in the art of maintaining dictatorial power! (Over twice as long as Stalin, four times as long as Hitler, and even longer than Kim Il Sung.) Guess those poor deluded Cuban communist fools have no idea what the brilliantly crafty Jeff Flake was up to!

I apologize for insulting your intelligence with this issue, amigos. But that idiotic “the embargo is Castro’s best friend” meme pops up often and demands a response. So here it is:

If Castro “secretly favors the embargo,” then why did Castro’s secret agents in the U.S. ALL secretly and obsessively campaign AGAINST the U.S. embargo while working as secret agents?

Castro managed the deepest and most damaging penetration of the U.S. Department of Defense in recent U.S. history. The spy’s name is Ana Belen Montes, known as "Castro’s Queen Jewel" in the intelligence community. In 2002 she was convicted of the same crimes as Ethel and Julius Rosenberg, and today she serves a 25-year sentence in federal prison. Only a plea bargain spared her from sizzling in the electric chair like the Rosenbergs.

Prior to her visit from the FBI and handcuffing, Ana Belen Montes worked tirelessly to influence U.S. foreign policy AGAINST the embargo. The same holds for more recently arrested, convicted, and incarcerated Cuban spies Carlos and Elsa Alvarez and Kendall and Gwendolyn Myers. All of these worked tirelessly to influence U.S. policy AGAINST the "embargo," while working as secret agents… Duh?

As Obama implemented his Cuba “opening” (to cheers from libertarians like Rand Paul) your humble servant went blue in the face trying to explain the horrible, but eminently predictable, consequences to some libertarians on John Stossel’s show.

In fact, for the past two decades, the so-called U.S. embargo has mostly stipulated that the Castro regime pay cash up front through a third-party bank for all U.S. agricultural products — no taxpayer financing of such sales. Enacted by the Bush team in 2001, this cash-upfront policy has been monumentally beneficial to U.S. taxpayers, making them among the few in the world not stiffed by Cuba, which per capita, qualifies as the world’s biggest debtor nation, with a foreign debt estimated at $60 billion.

We’ve been spared such fleecing because on Oct. 1960—right after Castro’s gunmen stole $7 billion from U.S. businessmen and tortured and murdered a few who resisted-- President Eisenhower imposed the first economic sanctions against the thieving, mass-murdering Stalinists who mostly (still) run Cuba. These sanctions grew into one of the CROWN JEWELS of recent U.S. foreign policy: The Cuba embargo, which Pres. Trump put more teeth into than any recent U.S. president.

Any chance that the signers of this anti-embargo letter which ran as an ad in The New York Times are working as agents of influence (on the payroll or off) for the Castro regime?

There was a day when The Foreign Agents Registration Act was actually enforced–i.e. when agents of foreign governments were obligated to register as such with the U.S. Dept. of Justice. Should this law ever be enforced regarding agents for the Castro regime, we could expect most of Hollywood and half the Democrat party in handcuffs and escorted by bailiffs.