Latina Freedom-Fighter Who Was Tortured Until Insane by Racist, Sexist Regime Dies—Did You Hear?

Humberto Fontova
|
Posted: Feb 06, 2021 12:01 AM
Share   Tweet
The opinions expressed by columnists are their own and do not necessarily represent the views of Townhall.com. 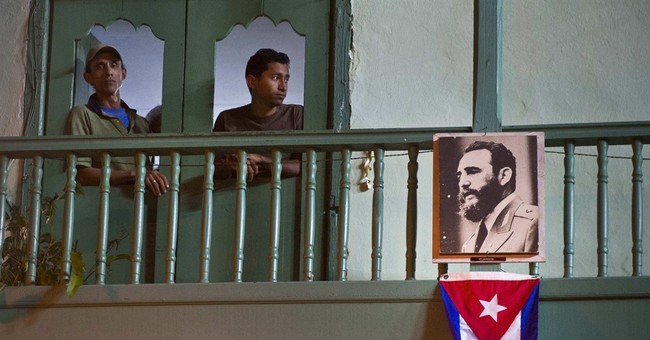 No?...You mean to tell me that from the Mainstream Media (so abundant with “feminists”) you didn’t hear about this “Latina” girl who, when younger than Miley Cyrus, courageously took up arms as a guerrilla fighter against a murderous, terror-sponsoring (genuinely) Russia-colluding regime, was captured, horribly tortured in utterly dark, underground dungeons crawling with rats and roaches where she lost her baby and eventually her mind? She suffered 15 years as a political prisoner enduring horrible tortures, alongside the longest-suffering female political prisoners in modern history, in a locale absolutely infested with mainstream “news” bureaus and their intrepid “reporters” and correspondents. Finally she was released in a prisoner exchange and found refuge in the U.S.

You mean the U.S. Mainstream Media didn’t inform you of how her brother and husband, fellow guerrilla fighters against Soviet commanded oppressors, were also captured by Soviet–armed and commanded storm-troopers on orders of the regime whose historic rationale was the destruction of the U.S.—and were murdered by firings squads, well within earshot of the “latina” freedom-fighter, as the murderers taunted her with laughs and jeers?

Well, gosh?  Doesn’t this story—involving events just 90 miles from U.S. shores and a legal U.S. resident—seem to have all the villains, heroes, drama and plot the Mainstream Media/Democrat/Hollywood/Publishing-Complex could ever DREAM of—for a smashing, human-interest story, documentary, movie, etc?

AH! But here’s the kicker, amigos: the latina freedom-fighter in question, Zoila Aguila, who passed away this week in Miami of Covid, fought against and was tortured horribly till insane by the regime co-founded by the Left’s premier poster boys—Fidel Castro and Che Guevara.

Need I say more about the media blackout?

When the hacks who host and narrate programs on The History Channel, NPR, etc. call Che Guevara a "guerrilla fighter" they're quite correct, but unwittingly. After all, the term "Indian fighter" was used for cowboys who fought against Indians right?  Well, did your history professor or The History Channel inform you that one of the bloodiest and longest guerrilla wars on this continent was fought - not by - but against Fidel Castro and Che, Guevara and mostly by campesinos (country folk)?

Didn't think so. Farm collectivization was no more voluntary in Cuba than in the Ukraine. And Cuba's Kulaks had guns, a few at first anyway. Had these rebels gotten a fraction of the aid the Afghan Mujahideen got, the Viet Cong got — indeed that George Washington's rebels got from the French — had these Cuban rebels gotten any help, some bandits named Fidel Castro and Che Guevara would probably merit less Wikipedia space today than Pancho Villa.

But JFK's Missile Crisis "solution" pledged to Castro and his Soviet sponsors that the U.S. pull the rug out from under Cuba's in-house freedom fighters. Raul Castro himself admitted that at the time of the Missile Crisis his troops and their Soviet advisors were up against 179 different "bands of bandits" as he labeled the thousands of Cuban anti-Communist rebels then battling savagely and virtually alone in Cuba's countryside, with small arms shipments from their compatriots in south Florida as their only lifeline.

Kennedy's shameful surrender to Khrushchev which “solved” the so-called Cuban Missile Crisis cut this lifeline. The Cuban freedom-fighters working from South Florida were suddenly rounded up for "violating U.S. Neutrality laws." The Coast Guard in Florida got 12 new boats and seven new planes to make sure Castro and his Soviet patrons remained utterly unmolested as they consolidated Stalinism 90 miles from U.S. shores. Think about it: here's the U.S. Coast Guard and Border Patrol working 'round the clock arresting Hispanics in the U.S. who are desperate to return to their native country.

Zoila Aguila was prominent among these lonely and virtually-unknown Cuban freedom-fighters. On the other hand the utterly bogus battles of the utterly bogus guerrillas (the Castro brothers and Che Guevara) had been trumpeted to high heavens by the U.S. media. And this relentless propagandizing was highly appreciated:

“Much more valuable than rural recruits for our Cuban guerrilla force were American media recruits to export our propaganda,” snickered Ernesto “Che” Guevara in his diaries.

This ferocious guerrilla war, waged 90 miles from America's shores, might have taken place on the planet Pluto for all you'll read about it in the MSM and all you'll learn about it from those illustrious Ivy League academics. To get an idea of the odds faced by those betrayed rural rebels, the desperation of their battle and the damage they wrought, you might revisit Tony Montana during the last 15 minutes of "Scarface."

Che had a very bloody (and typically cowardly) hand in this slaughter, one of the major anti-insurgency wars on this continent. Many of these anti-communist guerrillas were executed on the spot upon capture, a Che specialty. "We fought with the fury of cornered beasts," is how one of the lucky few who escaped described this desperate freedom fight against the Soviet occupation of Cuba through their proxies Fidel and Che.

In 1956 when Che linked up with Fidel, Raul, and their Cuban chums in Mexico City, one of them (now in exile) recalls Che railing against the Hungarian freedom-fighters as "Fascists!" and cheering their extermination by Soviet tanks.

Mass murder was the order in Cuba's countryside. It was the only way to decimate so many rebels. These country folk went after the Reds with a ferocity that saw Fidel and Che running to their Soviet sugar daddies and tugging their pants in panic. That commie bit about how "a guerrilla swims in the sea which is the people, etc." fit Cuba's anti-Fidel and Che rebellion to a T. So in a relocation and concentration campaign that shamed anything the Brits did to the Boers, the gallant Communists ripped thousands of Cubans from their ancestral homes and herded them into concentration camps on the opposite side of Cuba.

One of these Cuban redneck wives (Zoila Aguila) refused to be relocated. After her husband, sons, and a few nephews were murdered by the Gallant Che and his Soviet-armed and led minions, she grabbed a tommy gun herself, rammed in a clip and took to the hills. She became a rebel herself. Cubans knew her as La Niña Del Escambray.

For a year she ran rings around the Communist armies sweeping the hills in her pursuit. Finally in 1964 she ran out of ammo and supplies and the communist storm-trooper rounded her up. All this was totally ignored by the foreign media.

On the other hand, Zoila Aguila’s torturers got no end of adulatory coverage from media “feminists.”