Humberto Fontova
|
Posted: Aug 22, 2020 12:01 AM
Share   Tweet
The opinions expressed by columnists are their own and do not necessarily represent the views of Townhall.com. 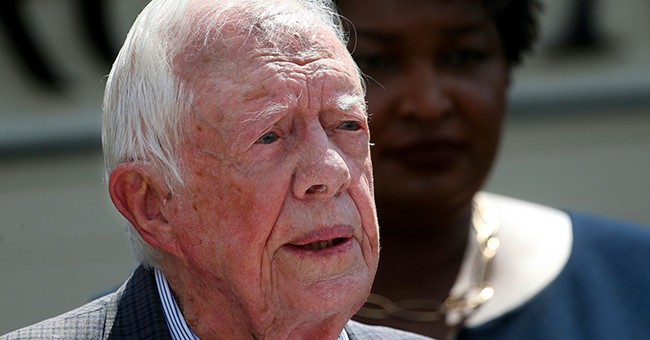 “Joe has the experience, character, and decency to bring us together and restore America’s greatness. We deserve a person with integrity and judgment, someone who is honest and fair, someone who is committed to what is best for the American people. He understands that honesty and dignity are essential traits that determine not only our vision but our actions. More than ever, that’s what we need," said Jimmy Carter endorsing Joe Biden at the DNC.

And speaking of Jimmy Carter’s interpretation of “character, decency, integrity, honesty” and people whose hearts and minds are focused on “what’s best for America”:

"Fidel Castro first and foremost is and always has been a committed egalitarian. He wanted a system that provided the basic needs to all — enough to eat, health care, adequate housing and education. Cuba has superb systems of health care and universal education…we greeted each other as old friends," said Jimmy Carter.

"In 2002, we received him warmly," reciprocated the terror-sponsoring Fidel Castro. "Now, I reiterated to him our respect and esteem."

"Jimmy Carter was the best of all U.S. Presidents," gushed Raul Castro while seeing his American guest off personally and jovially in 2011.

And speaking of those who want what’s “best for America,” a trait on which Jimmy Carter pronounced himself an expert this week:

“War against the U.S. is my true destiny!” proclaimed Fidel Castro in April 1958, at a time, by the way, when our crackerjack State Department and our super-crackerjack CIA were helping his terrorist July 26 Movement, both morally and materially.

“The U.S. is a vulture preying on humanity!” charged Fidel Castro in 1959.

What?!” gasped Nikita Khrushchev (himself one of Stalin’s most faithful henchmen, and thus not squeamish about breaking a few eggs towards a communist omelet) on Oct. 28, 1962, as recalled by his son Sergei. “Is he (Fidel Castro) proposing that we start a nuclear war?! That we launch missiles from Cuba?!”

“Yesterday the Cubans shot down a plane (U-2) without our (Soviet) permission. Today they’re preparing a nuclear attack!....But that is INSANE!..Remove them (our missiles) as soon as possible! Before it’s too late. Before something terrible happens!” commanded a horrified Butcher of Budapest (so much for the Camelot/Fake News Media/Hollywood fairy tale about JFK “standing up to the Russians in Cuba!”).

“Of course I knew the missiles in Cuba were nuclear-armed. That’s precisely why I urged Khrushchev to launch them against the U.S.!” Fidel Castro told Robert McNamara in October 1992.

“You Americans just don’t understand it. The depths of my brother Fidel’s hatred for your country cannot be imagined by you Americans.  His intention—his OBSESSION!—is to destroy the U.S.!” Juanita Castro testified before the House Committee on Un-American activities on June 1965, shortly after defecting from Cuba.

Important note: None of the Carter-Castro love-fest incidents documented here involved “official diplomatic events” where a U.S. official hob-knobbing with a despot, crook, or mass-murderer is often unavoidable, as he works for his nation’s interest. (So kindly stifle the “Trump with Kim Jong-un, Xi Jinping, Putin comparison/idiocy.) Instead the above were all private trips by Carter to hob-knob his with terror-sponsoring “friend” Fidel Castro, whose lifelong craving was the destruction of the nation which elected Carter president.

“Joe Biden will be a president we will all be proud to salute. With Joe Biden in the White House, you will never doubt that he will stand with our friends and stand up to our adversaries—never the other way around,” Colin Powell said endorsing Joe Biden at the DNC.

Given the items thoroughly-documented above regarding the dictator whose lifelong obsession was America’s destruction, let’s see what Colin Powell—who served variously as U.S. National Security Advisor, Chairman of the Joints Chief of Staff and U.S. Secretary of State—has to say:

“He (Fidel Castro) has done some good things for his people," declared Powell in addressing the U.S. Congress on April 26, 2001.

“I do not think that he (Colin Powell) is a warmonger,” Fidel Castro reciprocated. “He is the only one who has dared to say that Cuba has done good things.”

Moving to another DNC Biden endorser:

"Today I'm asking all Americans... to come together in this campaign to support your (Joe Biden’s) candidacy, which I endorse…We've got to make [Donald] Trump a one-term president and we need you in the White House, so I will do all that I can to see that that happens," said Sen. Bernie Sanders. (The two announced the formation of several task forces focused on shared policy concerns, including on the economy, education and criminal justice.) “I hope that these task forces will come together utilizing the best minds and people in your campaign and in my campaign to work out real solutions to these very, very important problems."

Moving on to some other famous “endorsements” by Bernie Sanders:

Now, regarding that “transformation” in Cuba that Bernie seems so keen about (and keeping in mind that Sanders has “task forces” working diligently with Biden “task forces” for the Democrat platform), a few items:

“Fidel Castro jailed and tortured political prisoners at a higher rate than Stalin during the Great Terror. He murdered more Cubans in his first three years in power than Hitler murdered Germans during his first six.

“Fidel Castro shattered — through mass-executions, mass-jailings, mass larceny and exile — virtually every family on the island of Cuba. Many opponents of the Castro regime qualify as the longest-suffering political prisoners in modern history, having suffered prison camps, forced labor and torture chambers for a period three times as long in Fidel Castro’s Gulag as Alexander Solzhenitsyn suffered in Stalin’s Gulag.”

Fidel Castro and Che Guevara beat ISIS to the game by over half a century. As early as January 1959 they were filming their murders for the media-shock value.

In the above process of mass-murder and mass-incarceration, Fidel Castro “transformed” a highly-civilized nation with a higher standard of living than much of Europe, among the best literacy rates and health-care indices in the hemisphere, and swamped with immigrants into a slum/sewer ravaged by tropical diseases and with the highest suicide rate in the Western Hemisphere.

Everything above meticulously linked and documented here.