What About Red China’s ‘Command Post for the Americas’ on Our Doorstep?

Humberto Fontova
|
Posted: Mar 21, 2020 12:01 AM
Share   Tweet
The opinions expressed by columnists are their own and do not necessarily represent the views of Townhall.com. 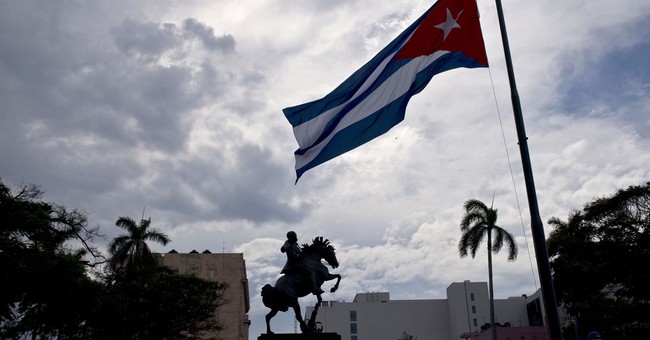 "China helps Cuba out of its economic crisis with subsidies and Cuba provides its archipelago to be its (China’s) command post in the Americas.” (Chinadialogue, Nov. 19, 2019)

"Cuba to attract more Chinese visitors with versatile appeal: The number of Chinese visitors to Cuba has in recent years risen to 50,000. Cuban tourism authorities hope to see 4.5 million foreign visitors in 2020, up by 200,000 from 2019, including thousands more from China.”

And yet passenger flights between the U.S. and Havana, Cuba, remain unaffected by any travel bans, emergency or otherwise, while those to and from China and Italy have been long shut down.

Now, Cuba claims only 19 confirmed coronavirus cases, and claims most of them consist of Italian tourists, while 523 people on the island, including 159 foreigners, remain hospitalized and under tests.

Let’s just say such figures—like any figures that are issued from that Stalinist fiefdom—are “suspect.”

Let’s look at some recent history for examples of official Cuban “misrepresentation" regarding medical matters:

“A new analysis of Zika-infected travelers who returned to the United States or Europe in 2017 or 2018 has found that 98% had visited Cuba, which did not report any cases to world health officials at the time the country’s outbreak apparently peaked."

“It was startling,” says Kristian Andersen, a genomic epidemiologist at Scripps Research in San Diego, California, who led the work conducted by 38 researchers from five countries. The group estimates that Cuba had 5707 unreported cases, with most occurring in 2017. (The year, by the way, when Obama’s “opening” made U.S. travel to Cuba very chic--and very important to the Stalinist regime’s coffers, especially those of the secret police and military who majority own Cuba’s tourism infrastructure.)

“Of 91 travel-associated Zika cases identified in Florida from June 2017 to October 2018, the team found that all but one infected individual was returning from Cuba. …Likewise, 63 of 64 travel-associated cases caught in Europe during that time frame involved travel to Cuba. Cuba’s unrecognized [no--it was fully recognized by the Stalinist regime which kept it hush-hush!] Zika outbreak may have “silently” spread the virus to other parts of the world and continues to infect international visitors today.” (Zika News)

“This was an unexpected finding,” explained that auxiliary to Castro’s press agency named The New York Times (actually, not unexpected at all by people who understand how the Castro regime operates!) "Cuba has a sophisticated public health system,” stressed the straight-faced New York Times, “and it had seemed to be winning the war against Zika, apparently avoiding the outbreaks seen on other Caribbean islands.” (Another blatant lie.)

“Officials at P.A.H.O., an arm of the World Health Organization,” continued a straight-faced New York Times, “blamed the failure to publish timely data on the Cuba outbreak on a “technical glitch.”

Fine.  Let’s review some these Castroite “technical glitches” in action, shall we:

A few years ago Cuban doctor Dessy Mendoza was on the phone with a Miami radio station reporting an outbreak of dengue fever in eastern Cuba—suddenly KGB-trained police stormed his house and arrested him.   He was charged and sentenced for “spreading enemy propaganda.”

Totalitarian Cuba’s “Law of National Dignity” mandates jail sentences of three to 10 years for “anyone who, in a direct or indirect form, collaborates with the enemy’s media.”

Here’s an example of another Castroite “technical glitch":

A few years ago Katherine Hirschfield, an Oklahoma University doctoral candidate, undertook a study of Cuba’s vaunted healthcare—but as a participant rather than as regime-escorted “scholar” (i.e. propagandist). Her plan was to live for a year with a Cuban family in Cuba’s second largest city of Santiago.

Typical of “scholarly” studies that include a visit to Cuba, scholar Hirschfield admits that: “My project was intended to document and highlight Cuba’s achievements in Social Medicine.” (Hence her lightning-quick visa clearance).

Shortly after settling in with her Cuban hosts, Hirschfeld was shocked to find her neighborhood full of Cubans suffering from dengue fever—though she had never heard of this epidemic while in the U.S.

But upon every inquiry to the Castroite authorities (which included most of the doctors in the area) she was self-righteously harangued to the effect that dengue—though rampant during the unspeakable Batista era—had been eradicated by the glorious Revolution shortly upon its triumph! She was obviously imagining things.  Ministry of Truth had spoken.

(Actually: In pre-Castro Cuba, Zika—along with all the tropical diseases that periodically ravage Castroite Cuba from Zika to Chikungunya to Hepatitis A to West Nile Virus —were virtually unknown. )

Soon Hirschfield caught dengue fever herself and was ushered into a crowded and typically filthy clinic that was swarming with mosquitoes and guarded by soldiers. The crowded conditions owed to the obvious epidemic of dengue fever then ravaging eastern Cuba—and still being denied by the authorities (and being unreported by the “news” bureaus with their “intrepid investigative reporters” so graciously hosted by Castro). The ubiquitous armed and vigilant soldiers (i.e. “technical glitches”) were evidence of the Stalinist regime’s craving to keep the epidemic secret.

Infected herself, and in a filthy hospital crammed to suffocation with Cubans suffering horribly from the disease, Katherine Hirschfeld took a cue from Groucho Marx and finally decided to believe her eyes rather than Castro’s Ministry of Truth.

A desperate Hirschfield tried phoning her family from Cuba to inform them of her plight. Immediately armed soldiers (i.e. “technical glitches”) grabbed her and prevented the call.

For some reason when Michael Moore, CNN, The New York Times, MSNBC, etc. etc. etc. visit Cuba to extol the marvels of Cuba’s Potemkin healthcare to the world they never run into any “technical glitches." Funny, isn't it?