Humberto Fontova
|
Posted: Dec 07, 2019 12:01 AM
Share   Tweet
The opinions expressed by columnists are their own and do not necessarily represent the views of Townhall.com. 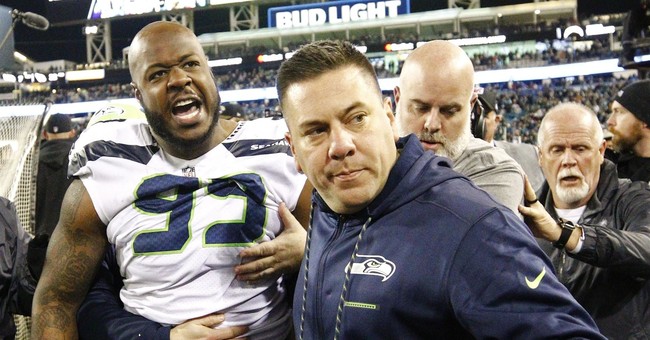 “This week, the Seahawks are proudly showing off their game shoes for the NFL’s annual Week 14 My Cause My Cleats initiative. Players across the league will be wearing special shoes customized to causes and charities of their choices during games," The News Tribune reported. "(Defensive end) Quinton Jefferson’s have Malcolm X, Rosa Parks, Che Guevara and other revolutionaries stenciled into the side of his—drawn by King County teenagers rehabilitating from incarceration."

"It’s pretty cool that they were in touch with freedom fighters," Jefferson said. "So it was pretty dope.”

It was off-field, during a press conference denouncing the jailing of blacks, that black activist-quarterback Colin Kaepernick wore his t-shirt honoring the jailer and torturer of the longest-suffering black political prisoners in the Western Hemisphere.

It will be on the field this Sunday that black activist-defensive-end Quinton Jefferson will honor Fidel Castro’s Stalinist sidekick who regarded blacks as “lazy, drunken and averse to baths.”

So it’s a toss-up, as to who wins this play-off.

In fact, Jefferson comes across as a decent family man with good intentions. He simply seems—like the kids and administrators in the “rehabilitation program”—a victim of modern public education/indoctrination.

“The negro is indolent and lazy, and spends his money on frivolities and drink.” This comes straight from Che Guevara’s diaries, better known subsequently as The Motorcycle Diaries. But for some reason Robert Redford saw fit to omit this charming observation from his charming movie on the young Ernesto Guevara.

In fact, many Cuban blacks suffered longer incarceration in Castro and Che’s dungeons and torture chambers than Nelson Mandela suffered in South Africa's (relatively) comfortable prisons. In fact, these Cubans qualify as the longest-suffering political prisoners in modern history. Eusebio Penalver, Ignacio Cuesta Valle, Antonio Lopez Munoz, Ricardo Valdes Cancio, and many other Cuban blacks suffered almost 30 years in Castro's prisons. These men (and many women too, by the way, black and white) suffered their tortures 90 miles from U.S. shores.

But you’ve never heard of them, right? And yet from CNN to NBC, from Reuters to the AP, from ABC to NPR, Castro’s Stalinist-Apartheid fiefdom hosts an abundance of U.S. and international press bureaus and crawls with their intrepid “investigative reporters.”

On the other hand, you can’t swing a dead cat in the media without hitting the name Nelson Mandela. Interesting how that works.

“Reporters in Havana are either insensitive to the pain of the opposition or in clear complicity with the government.” (Black Cuban torture-victim Jorge Antunez in the Miami Herald.)

During a press conference shortly upon Castro and Che’s entry into Havana in 1959 Luis Pons, a prominent black Cuban businessman asked Che Guevara what his revolution planned on doing to help blacks. Che answered: “We’re going to do for blacks exactly what blacks did for our revolution. By which I mean: nothing!”

Che was much too modest. "Nothing" is not exactly accurate for the Castro regime’s treatment of Cuba's blacks. In fact, these lily-white icons (Che and Fidel) of American black “leaders” and celebrities forcibly overthrew a Cuban government where blacks served as President of the Senate, Minister of Agriculture, Chief of Army, and Head of State (Fulgencio Batista), a grandson of slaves who was born in a palm-roofed shack. Not that you'd guess any of this from the liberals' exclusive educational source on pre-Castro Cuba: Godfather II.

"The Cuban government tries to fool the world with siren songs depicting racial equality in our country,” explains Cuban black dissident Bertha Antunez. “But it is all a farce, as I and my family can attest, having suffered from the systematic racism directed at us by Castro's regime. Cuban blacks suffer the scourge of racial hatred every day. The beatings by the police are always accompanied by racial epithets. They set dogs on us. The only thing we have to thank the Cuban revolution for, is for restoring the yoke of slavery that our ancestors lived under."

“It is simply a sociological fact,” casually remarked an official of the Castro regime (whose co-founder is honored on Quinton Jefferson’s cleats) to a visiting American scholar a few years ago, “that blacks are more violent and criminal than whites. They also do not work as hard and cannot be trusted.”

“N**ger!” taunted my jailers between tortures,” recalled the world’s longest suffering black political prisoner* to this writer. “'We pulled you down from the trees and cut off your tail!' laughed my Castroite torturers. For months I was naked in a 6 x 4 foot cell. That’s four feet high, so you couldn’t stand. But I felt a great freedom inside myself. I refused to commit spiritual suicide.”

(*Eusebio Peñalver, a black Cuban jailed and tortured by the Castro regime longer –and much more horribly–than Mandela was by South Africa’s–yet utterly unknown to Americans thanks to the U.S. media/Castroite collusion.)