Humberto Fontova
|
Posted: Feb 02, 2019 12:01 AM
Share   Tweet
The opinions expressed by columnists are their own and do not necessarily represent the views of Townhall.com. 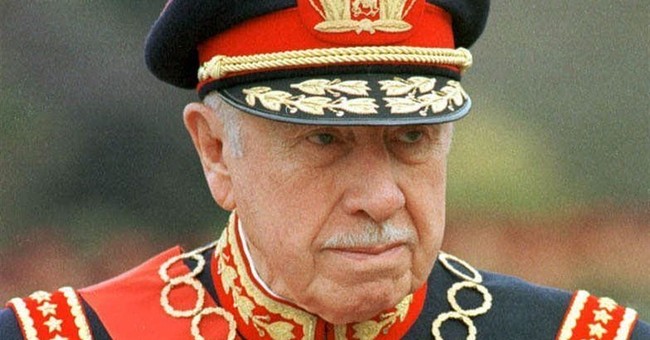 That Castroite Cubans not only influence the relevant power centers in socialist-destroyed Venezuela (i.e. military & secret police,) but staff and control these power centers, must be old- hat to Townhall readers by now.

It’s been the catastrophic state of affairs for years by now: “Venezuela today is a country that is practically occupied by the henchmen of two international criminals, Cuba's Castro brothers,” declared Luis Miquilena who served as Hugo Chavez’s Minister of Justice for three years before finally resigning in disgust. “They (the Cubans) have introduced in Venezuela a true army of occupation. The Cubans run the maritime ports, airports, communications, the most essential issues in Venezuela. We are in the hands of a foreign country. This is the darkest period in our history!”

And that was almost five years ago!

Since then conditions have only worsened (if such a thing is possible.) And unfortunately history proves that Castro-Commies cannot be defeated with “referendums,” international “tsk, tsks,” and finger-wagging….sorry.

In fact, history shows that the Castroite curse can only be extinguished with a “‘heapin helping” (not of “Hillbilly hospitality”) but of its own medicine. Take the case of Soviet-Cuban satrap Salvador Allende in Chile.

What a joke. In fact, the proof of the (historically pinko-riddled) CIA’s non-involvement in the ouster of Salvador Allende and his cabal of Soviet/Cuban stooges (which quickly led to Chile’s path to freedom and prosperity) is easily proven by a simple fact: it succeeded—and brilliantly!

But for pedants there’s even more proof:

"We had nothing to do with it," Kissinger told Nixon over the phone on June 1973 after an earlier (and botched) coup attempt against Allende. “It came as a complete surprise to us." Added Assistant Secretary of State Jack Rush. “My firm instructions to everybody on the staff are that we are not to involve ourselves in any way,” reported U.S. ambassador (to Chile) Nathaniel Davis, who kept hearing coup rumors from his Chilean contacts.

Then on September 16, five days after Pinochet’s successful coup Nixon asked Kissinger: "Well, we didn't--as you know--our hand doesn't show on this one though?"

"We didn't do it,” replied Kissinger.

"We’re following the example of the Cuban Revolution and counting on the support of her militant internationalism represented by Fidel Castro and Che Guevara!” boasted Chilean president Salvador Allende’s minister Carlos Altamirano in January 1971. “Armed conflict in continental terms remains as relevant today as ever!" he declared.

By 1973, 60% of Chile’s arable land had been stolen by Allende’s Marxist regime, often with the aid of Cuba-trained death squads. "In the final analysis only armed conflict will decide who is the victor!" added Allende’s governmental ally, Oscar Guillermo Garreton. “The class struggle always entails armed conflict. Understand me, the global strategy is always accomplished through arms!"

Allende’s deputy economic minister, Sergio Ramos, didn’t mince words either: "It’s evident," he proclaimed in mid-1973, "that the transition to socialism will first require a dictatorship of the proletariat!"

"Stalin was a banner of creativity, of humanism and an edifying picture of peace and heroism!" declared Salvador Allende during a eulogy in 1953. "Our father Stalin has died but in remembering his example our affection for him will cause our arms to grow strong towards building a grand tomorrow—to insure a future in memory of his grand example!"

So with the clock tickling ominously toward irreversible Castroism, Chile’s traditionally un-political military made a (genuine) pinprick strike against Allende and his Stalinist minions.

Allende and Castro’s media minions claim 3000 people were “disappeared” during this anti-Communist coup and its aftermath, collateral damage and all. Well, even if we accept the Castroite figure, compared to the death-toll from our interventions/ bombing- campaigns in the Mid-East (that have yet to create a single free, peaceful and prosperous nation) Pinochet’s coup should be enshrined and studied at West Point, Georgetown and John Hopkins as the paradigm for effective “regime–change” and “nation-building.” Granted, Pinochet had much better raw-material to work with.

But the Castroite –MSM figure is mostly bogus, as many of those “disappeared” kept appearing, usually behind the iron curtain.

More importantly, Pinochet and his plotters were scrupulous in keeping U.S. State Dept. and CIA “nation-builders” and other such egghead busybodies out of their plotting loop. (As mentioned, this probably explains Pinochet’s success.) Then two years after the coup they invited free-market economist Milton Freidman and his “Chicago Boys” over for some economic tutelage. And as mentioned: today Chile is probably freest and richest nation in Latin America.

But perhaps my classification of the CIA as “pinko-riddled” strikes some of my amigos as unnecessarily hyperbolic? Perhaps as even untrue? Fair enough. Let’s have a look. No, amigos, it didn’t start with Brennan. To wit:

“Everyone in the CIA and everyone at State was pro-Castro, except [Republican] ambassador Earl Smith” (Robert Weicha, CIA operative in Santiago Cuba).

“Without U.S. help Fidel Castro would never have gotten into power. The State Department played a large part in bringing Castro to power. The press, the Chief of the CIA section are also responsible…we are responsible for bringing Castro in power. I do not care how you want to word it" (Earl T. Smith U.S. Ambassador to Cuba, 1957-59.)

In fact, some of those CIA men are still fuming over my expose’ of their “shrewdness.” Writing in the prestigious international Journal of Intelligence and CounterIntelligence (Volume 27, Issue 2, 2014) the man who served as the CIA’s station chief in Santiago Cuba (the area where KGB-managed Raul Castro operated) from 1957-60 Robert D. Chapman bashes my book The Longest Romance pretty severely. But without specifically refuting any of my (highly-embarrassing to him) documentation or quotes.