Humberto Fontova
|
Posted: Jul 15, 2017 12:20 AM
Share   Tweet
The opinions expressed by columnists are their own and do not necessarily represent the views of Townhall.com. 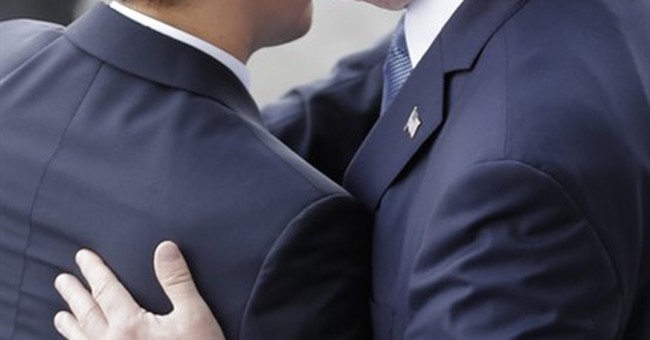 “Russia is a fierce rival of the U.S. and has been for generations. What politician jumps in bed with Russia? For advisers to a would-be President to take at face value an offer of clandestine assistance from Moscow is foolish at best, reckless for sure and potentially treasonous in the worst-case scenario.” (“Tailgunner” Joe McCarthy, Barry Goldwater and J. Edgar Hoover were all limp-wristed pinkos compared to this week’s Time magazine.)

Yet this very same Time magazine hails the Soviet Russians’ most faithful devotee/agent in the Americas as “Hero and icon of the Century!”

“The solution to the world’s problems lie behind the Iron Curtain.” (Che Guevara.)

“I have sworn before a picture of the old and mourned comrade Stalin that I won’t rest until I see these capitalist octopuses (the U.S.) annihilated!” (Che Guevara.)

“I have come to communism because of daddy Stalin and nobody must come and tell me that I mustn’t read Stalin.” (Che Guevara.)

“If the nuclear missiles had remained in Cuba we would have fired them against the heart of the U.S. including New York City. The victory of socialism is well worth millions of Atomic victims.”(Che Guevara, 1962.)

“What!? Is he (Fidel Castro) proposing that we start a nuclear war? That we launch missiles from Cuba…But that is insane!..Remove them (our missiles) as soon as possible! Before it’s too late. Before something terrible happens!” (Nikita Khrushchev Oct. 28th 1962.)

As documented above, had an aghast Butcher of Budapest not yanked the missiles from their “hero and icon” and his sidekick in the nick of time, the cinders representing New York’s Time-Life Bldg along with its staff would today fit in a milk carton.

In 1999 when Time magazine hailed “The 100 Most Important People of the Century,” Che Guevara was among them, which at first glance seems reasonable. The term “important,” after all, can be construed as morally-neutral.

But Time placed Che in its “Heroes and Icons” category of the Century’s Most Important People, alongside Anne Frank, Andrei Sakharov, Rosa Parks and Mother Theresa. Sean Hannity’s former partner the late Alan Colmes scoffed when I pointed to Time’s classification of Che’s “heroism” as a classic example of the ignorance (if not outright insanity) of the mainstream media’s treatment of the mass-murdering terrorist. Colmes flat-out refused to believe me, smirkingly implying to his huge TV audience that I was a typical “right-wing Cuban-American crackpot!”

But he was forced to gape-- WHOOPS! — (semi) apologetically when I produced the documentation on his very show.

Time’s affection for the mass-murdering terrorist who craved to incinerate them has hardly dissipated with time. Only two years ago, on the 48th anniversary of Che’s death, Time ran yet another love note to the mass-murderer: “How Che Guevara Didn’t Let Asthma Affect His Ambitions,” ran the Time headline.

From Time we learn that Ernesto Guevara was “born premature—tiny and sickly…Although he earned a medical degree before embarking on his communist crusades,” Time continues, “he didn’t focus on respiratory ailments.”

You see, amigos: unlike most “reporters” and “historians” who dutifully transcribe from the Castro regime’s propaganda ministry, unlike these frauds, your humble servant (who the Castro regime denounces as a “SCOUNDREL! TRAITOR!  And ENEMY of the STATE!” and bars from entering Cuba) actually researched the issue of Che Guevara’s life, consulting primary sources. Now here’s a truly revolutionary —and almost unheard of! -- procedure or Cuban historiography!

Well, after a very diligent search for Che’s elusive medical degree was conducted in Argentina itself (Ernesto’s Guevara’ birthplace) by a very thorough researcher, nothing showed up.

The diligent researcher was Dr. Enrique Ros, author and the late father of Rep. Ileana Ros-Lehtinen (R-FL) Chairman emeritus of the House Committee on Foreign Affairs—who incidentally, made a blockbuster book on Che Guevara required-reading for her colleagues on Capitol Hill.

When Cuban-American historian Enrique Ros inquired of the Rector of the University of Buenos Aires and the head of its Office of Academic Affairs for copies or proof of Ernesto Guevara’s medical degree, he was variously told that the records had been “misplaced” or perhaps even “stolen.”

Fascinatingly enough, the only copy of Ernesto Guevara’s Medical degree (supposedly earned in Argentina) was issued by—prepare for a shock!—the Castro regime!  Naturally such a source qualifies as hunky-dory for Time magazine.

In fact, for all the “heroism” Time attributes to him, the one genuine accomplishment in Che Guevara's life was the mass-murder of defenseless men and boys. Under his own gun dozens died. Under his orders thousands crumpled. At everything else Che Guevara failed abysmally, even comically.

As luck would have it, Che Guevara’s abysmal and comic failures—along with the rest of his sickening record--will be featured at the YAF’s rollicking Road to Freedom seminar next week amigos!  Be there or be SQUARE!