What’s Behind the Trump-Putin “Bromance?”

Humberto Fontova
|
Posted: Jan 22, 2016 12:22 PM
Share   Tweet
The opinions expressed by columnists are their own and do not necessarily represent the views of Townhall.com. 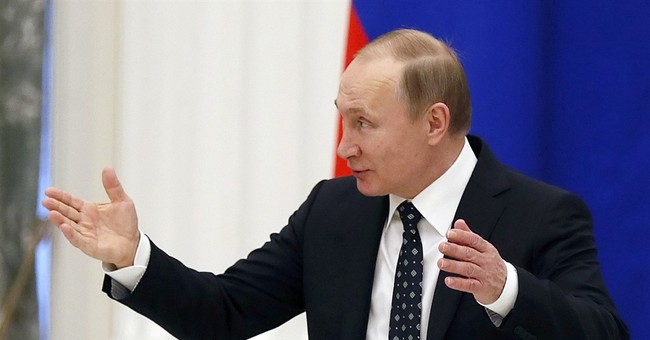 Back when Walter Cronkite was “the most trusted man in American” Accuracy in Media (AIM) denounced him as a Soviet dupe.

Back when The Washington Post’s Watergate “expose’” saw editor Ben Bradlee basking in a worldwide chorus of hosannas AIM’s own merciless expose’ of the WaPo’s bias and cover-ups finally drove the furious WaPo editor to briefly turn away from the multitudes, stifle his smile and publicly denounce AIM founder Reed Irvine as a "miserable, carping, retromingent vigilante!"

In brief, Accuracy in Media has never been much swayed by national crazes. They have a sharp eye for bogus heroes. That eye, now belonging to the late Reed Irvine’s long-time understudy and successor Cliff Kincaid, has recently focused on Donald Trump. More specifically, this focus concerns what might be behind that “bromance” between the (intermittently) Republican real estate tycoon and the “ex”-KGB Lieut. Colonel Vladimir Putin.

“It is always a great honor to be so nicely complimented by a man so highly respected within his own country and beyond,” (Donald Trump publicly responding to compliment from KGB Col. Vladimir Putin, Dec. 18, 2015.)

It may not be too complicated, suggests Kincaid, “Follow Trump’s Money to Moscow,” he titled a recent article:

‘So why has Donald Trump embraced Russian President Vladimir Putin? Why has he denied the evidence of Putin’s killing of Russian journalists and dissidents? A savvy businessman, Trump is certainly not dumb. There must be something else to it.

Reports dating back to 1987, during the time of the old Soviet Union, reveal that Trump has been seeking business in Russia and attempting to build a “Russian Trump Tower” in Moscow and perhaps other Russian cities.

In 1987, before the collapse of the Soviet Union, he was meeting with Soviet officials and negotiating the building of “luxury hotels” in Moscow and Leningrad. A story at the time said Trump had met Soviet Ambassador Yuri Dubinin, who mentioned how much his daughter had admired the “opulent” Trump Tower in New York City. This led to an invitation to Trump to visit the USSR. The story said Dubinin wrote a letter to Trump, who hosted a meeting with Soviet officials in New York.”

The meetings were not (immediately) fruitful. Soviets then (like Cubans today) demand a majority ownership in any foreign business venture in their fiefdom. Typically, Trump wasn’t having any of that. Yet:

“The book, The Global Emerging market: Strategic management and Economics, by Vladimir Kvint, said that as far back as 2008, the Trump Organization had registered its trademarks in Russia in the areas of real estate development and construction.”

Fast forward a bit and we find a story in Putin’s own captive media organ RT wherein Donald Trump, during his visit to Moscow in November 2013 for the Miss Universe pageant, gushes about building a Trump Tower in Moscow: “I have plans for the establishment of business in Russia. Now, I am in talks with several Russian companies to establish this skyscraper.”

The Soviet KGB (including its reign of terror under earlier monikers CHEKA, NKVD, etc.) tortured and murdered a vastly larger number of people than did Hitler’s Gestapo and SS. Vladimir Putin proudly rose to the rank of Lieut. Colonel within the KGB–modern history’s most murderous organization. Most of Putin’s KGB “service” was in East Germany where he worked hand in glove with the notorious STASI, which was the KGB’s star pupil and which they appointed as the hands-on tutors to Castro’s secret police.

“Nastiness,” we must conclude, is in the eye of the beholder.

In his book, “Blowing Up Moscow; The Secret plot to Bring Back KGB Terror,” the late KGB defector Alexander Litvinenko reveals that Al-Qaeda’s number two man, Ayman al-Zawahiri, was trained by the KGB. Defector Litvinenko, who was blowing the whistle on Putin and his gang of criminal KGB chums, was poisoned to death back in London back 2006.

Trump used the Twin Towers tragedy to great benefit against Ted Cruz in the latest debate. One very well-informed source claims the masterminds for the mass-murder of Americans in New York were trained by the very outfit where Trump’s newfound admirer Vladimir Putin proudly rose to the rank of Lieutenant Colonel.

“Ego-centric people who lack moral principles – who are either too greedy or who suffer from exaggerated self-importance. These are the people the KGB wants and finds easiest to recruit.” KGB defector Yuri Bezmenov, 1985.

“Ex”-KGB Colonel Vladimir Putin probably has a good clue about how to get on the good side of somebody like Donald Trump.